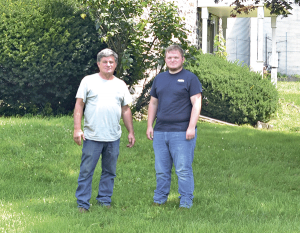 The Farm Bureau described the DiFebo family as demonstrating creativity and an understanding both of soil and natural resources.

Rick DiFebo didn’t start out a farmer. He went into the lawn care business and married into the farm, he said. His wife Lynn’s father, Budd Ott, operated a dairy for 24 years before selling off the herd and equipment. Twenty-three years ago, DiFebo took over the last 10 Holsteins and experimented with grass-feeding only.

The farm had soil erosion and water quality problems, he said.

There have been DiFebo and Ott family farms on the northeast edge of the Lehigh Valley for the last 100 years.

“I decided to buy cattle,” he said. “I knew animals on the land was going to improve the soil.”

He started with four beef cows and now has 180: Black Angus, Red Angus, polled Hereford and Devon, plus some crosses, according to Rick’s son, Dohl, who is a partner in the farm.

“Nobody knew the benefits of grass-fed beef then,” he said. However, he always felt the connection between the farmer and his community. “I wanted to get a good quality product and sell to my neighbors.”

Keeping everything close to home, he uses a local butcher.

“The money stays in the community,” he said. He started selling quarters, halves and whole cows directly to the consumer in 2002. DiFebo received a USDA license in 2008 and sells beef by the cut to health food stores.

DiFebo knew the benefits of healthy soil from his work in lawn care and started some uncommon practices on the farm.

DiFebo signed on early to no-till practices, which his father-in-law also used. Ott was considered a pioneer of no-till in the 1970s, but he didn’t plant cover crops, which was not common practice then. DiFebo does.

The cows get to munch on millets, sorghum, triticum and other grasses in a diverse rotation that focuses on soil health.

He grazes the cows in smallish paddocks and moves them frequently so they get the best grass. He moves the fencing every day for 85 days of the grazing season. Occasionally an intrepid calf will slip under the fence, he noted, but he doesn’t mind the youngsters looking for white clover. When the soils get too rich from the grazing, DiFebo will plant corn for a year to pull some of the nitrogen out of the soil.

Each paddock has a water source (some with water pumps), all with underground lines. The water sources were installed with help from the Natural Resources Conservation Service. The farm also received a grant from the federal Department of Energy for a solar pump. After the water reaches the top of the hill, gravity takes it to the cows.

Harvest Home Farm also has hayfields on a picturesque hill overlooking the Delaware River. He hays the fields of bluegrass and white clover three times a season.

DiFebo believes the main reason he received the Leopold Award is his involvement with a 65-acre parcel that belongs to the Upper Mount Bethel School District. The property, which is adjacent to the township’s middle school, was designated for a school when it seemed population growth would continue unabated, DiFebo explained. When the growth stopped, the district turned the land into an outdoor classroom and environmental center.

DiFebo brings his cows there in winter and trucks in round bales. The preserve is open to the public and has become a popular dog walking area. An open deck in a wooded stand serves as a classroom. Kiosks that contain information about the farmland and its wild denizens were funded by the National Park Service, DiFebo said.

Dohl DiFebo and his brother Dane, who works for the Gettysburg Historic Site but comes to help out on the farm on weekends, are continuing the innovative practices that won Harvest Home the award.