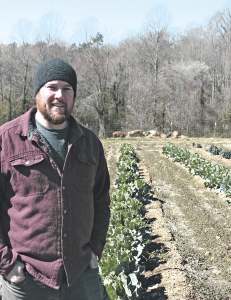 TOBACCOVILLE, NC – Harmony Ridge is a produce and livestock farm in North Carolina’s northern Piedmont. The farm has a CSA and markets to restaurants throughout the Old North State and beyond. In addition to selling about 25 different types of vegetables grown on the farm, Harmony Ridge sells eggs from its 2,500 chickens as well as farm-raised pork and duck. It also serves as a broker for other produce and livestock growers in North Carolina and Virginia. But it wasn’t always so sustainable, productive and robust.

Harmony Ridge began in 2009 when Isaac Oliver lost his construction job in Washington State and moved with his wife Holly to North Carolina, where his father Kevin lived.

“We both liked to garden,” Isaac said of himself and his father. “We started talking about starting a CSA. The more we talked about it, the more we got excited.”

Kevin bought a parcel of land near his home. It had 2.5 cultivatable acres, and in autumn 2009 Isaac readied an acre for planting the following spring.

“We went into this business cold,” Isaac said. “The learning curve was very steep. I could have learned a lot by working on another farm first.”

But the Olivers learned on their own.

One of their first missteps occurred that autumn. When plowing and discing the land, they also added horse manure. It was meant to enrich the land, but it also led to a plethora of weeds the following year.

Despite that setback, the first year of the CSA was a success – they signed up 25 members and packed boxes for 26 weeks.

“We grew a good variety of stuff,” Isaac recalled. “I was trying a little of everything. We had a little BCS walk-behind tractor but everything else pretty much hand work.

“Looking back, I can see now I was working myself to the bone,” he reflected. “We were trying to grow too many varieties. I didn’t have a clear sense of how to cultivate properly.”

But as the Olivers learned the techniques of farmers – evolving from what Isaac describes as their “gardener’s mentality” – they became more productive. Adding a tractor helped, as did their adoption of plasticulture.

At one point, about five years ago, the Olivers were running two CSA programs. The regular program had about 100 members, as did a non-profit CSA called Farm Fresh Healthy Living, which was sponsored by corporate funds.

But those two programs weren’t enough to absorb all that Harmony Ridge was producing. They were also selling at a farmers market. When the market closed, and Isaac had more produce, he would take his surplus to restaurants to see what he could sell.

“It was really casual,” he said. “Over time I realized it made sense to methodically plan to sell to restaurants.”

Today the farm has 70 accounts and sells year-round. On Mondays they send out a stock list to their customers, with orders due by mid-week. Deliveries are made to the Greensboro and Winston-Salem on Thursdays, the Charlotte area on Fridays and the Raleigh area every other week.

Like everyone else, Isaac has no idea how the coronavirus will impact his business. With a slowdown in restaurant demand, it’s good that he has a CSA option as well.

Matt Patterson is in charge of animal husbandry. “He’s been really impressive,” Isaac said. With Patterson overseeing the livestock, it frees Isaac up to manage the planning, growing, sales, work in the greenhouse and hoop houses and quality control.

Kevin helps craft the farm’s long-term strategy and works in the field during the growing season. His particular focus is growing tomatoes and hard squash – spaghetti, butternut, acorn and red kuri.

Harmony Ridge’s current farm is just down the road from the original plot where Isaac fought weeds by hand in 2010. The main vegetable growing takes place in the center of the new farm, with livestock production surrounding the fields and hoop houses (the greenhouse is at the original location).

The chicken paddocks are fenced with woven wire, extended upward with deer fencing. “We added the deer fencing because we suspect coyotes were jumping the woven wire,” Isaac said. The chicken operation has two converted storage containers, one for egg washing, the other for breeding. The ducks they raise are Pekin.

Harmony Ridge is raising 200 hogs of mixed breeds. The Olivers don’t breed hogs, but buy in feeder pigs. Having the hogs surrounding the vegetable fields helps keep the deer at bay.

In a way, the early years of learning how to cope with the onslaught of tasks and responsibilities that came from operating a smaller operation gave Isaac the tools to manage the even greater level of details that come from an even bigger operation.

“I’m glad we started the way we did,” he said. “I had a lot of support from my dad. We’re pretty proud of where we’ve gotten. We’re in a pretty good place but we’re still keep pushing to get better.”