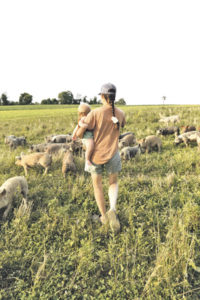 Clara Osborne and Jeremy Dunphy operate Pasture Song Farm on 150 leased acres, raising pastured meats, forage, small grains, cut flowers and a nine-month-old baby. The farm is located in Pottstown, PA, about 40 miles west of Philadelphia. “We lease 100 of the acres from a nonprofit called Lundale Farm,” Clara said. “Their mission is to foster agriculture in the area and also to show other landowners who want to lease land how to do it.” Lundale Farm comprises 520 total acres and leases land to multiple farm enterprises. The remaining 50 acres of leased ground is in a neighboring town.

Osborne grew up surrounded by farms in Lancaster County. During her first semester of college in New York City, she realized that she would rather be farming. She transferred to Warren Wilson College in North Carolina, where she majored in sustainable agriculture and worked on the college livestock farm. After college, she took a position at Kimberton Hills Dairy, where she met Dunphy, who grew up on an organic dairy farm.

About half of the 150 acres at Pasture Song are used for hay production; 10 acres are in active pig and broiler pasture; the remaining acreage is cover crops, shelled corn and small grains. They have the equivalent of one full-time employee helping with the livestock and cropping aspects of the farm. “Our typical rotation is hay to pasture. Then it’s corn followed by small grains,” Osborne said. “Our crop rotation is pretty flexible though because we keep adding ground.”

In 2021, they planted 20 acres of shelled corn for feed and 10 acres of rye that they’ll combine for cover crop seed. The straw will be baled and used for pig bedding. Typically, they raise an additional small grain, but this spring’s planting of oats suffered from the dry conditions, so they chose to disc them in and plant more corn.

A neighboring farmer combines the corn and grains for them before it is moved into a collection of grain bins. They buy about 80% of their soybeans from the same neighbor. Dunphy said, “We have the storage for 4,000 bushels. We use nine-foot hopper bins that have built-in fans to aid with drying. These hold anywhere from 500 to 1,000 bushels. In general, the small grains are at the appropriate moisture level at harvest. Mainly, it’s the corn that is too wet, so if that’s the case, we have it custom roasted at the farm.”

With an International 1250 grinder mixer, powered by a 75 hp New Holland tractor, they create a custom ration of soy and corn (and small grains if they have them) for their pigs and broilers. They raise pigs year-round and finish about 120 each year when they are seven to eight months old. About 75% of their piglets are born on the farm – a mixture of Tamworth, Berkshire and Hereford. The remainder of the piglets come from a nearby farm.

During the grazing season, they are divided into a breeding group, an older group that is approaching finishing and a younger group. “Right now, one group is grazing a stand of annuals and clover planted this spring and another is on a pasture planted in 2020. The breeding group is on a hedgerow,” Osborne said. Both pastured groups are rotationally grazed using a single strand of polywire, and the perimeter of the pastures is fenced with a double strand of steel wire.

“How often we move them definitely varies,” said Dunphy. “If we’re using pasture that we’re trying to preserve as pasture, we move once a week or every other week. If it’s a field we’re planning on renovating, we might leave them on for a month. We don’t really figure pasture in nutritionally. If it’s there, it’s a bonus. We figure it takes 1,000 pounds of grain to finish each one of our pigs.”

According to Osborne, pigs are challenging to pasture because they are more difficult to move than herding livestock. Also, their infrastructure – housing, waterers and feeders – must all be moved. Another challenge is the impact the pigs have on the pasture. “Pigs need to root and wallow,” Clara said. “Fortunately, they complement the crop rotation. We are able to smooth out the disturbances they create with the full field tillage that’s part of our crop rotation. They also add a lot of fertility.”

Smaller pigs are often started in a hoop barn where they are fence trained. During winter, they usually finish one group in the hoop barn, and the rest remain outside, often on the corn stubble from the previous growing season. Despite moving them through the stubble, mud is a perennial challenge. “We use a lot of bedding in the winter. We roll out lower quality hay around their house and feeder. We save the higher quality hay for the hoop barn because the pigs will eat it and it doesn’t get muddy like it does outside,” said Osborne.

Up to 1,600 broilers are raised during the pasture season in portable houses on skids, pulled daily with a tractor. This year they’re raising Cornish crosses. Each of the two houses holds 200 birds (for 400 birds per batch), and they raise four batches per season. Like the pigs, the broilers also consume the corn/soy ration, though more soy is added to increase the protein level. Grit is also added. The broilers complement their rotation by adding fertility to hay ground before it gets plowed and reseeded. When the birds are eight to nine weeks old, a mobile processor comes to the farm.

The flower production element of the farm developed out of the desire to have a farm stand and to eliminate the need for Osborne to work off the farm. “We live on a busy road, and we wanted to have a farm stand. It’s difficult to do that on frozen meat alone, so the flowers seemed like a good complement. We did a trial the first year and have been expanding ever since,” she said. She has several part-time and seasonal workers who help with cutting and arranging.

Currently, they grow about an acre of flowers, with a focus on spring and autumn production when Osborne said there is higher demand. Annual field flowers are grown in landscape fabric with underlying drip irritation in 140-foot-long beds.

Recently, Osborne started offering flower arranging workshops with locally-sourced snacks and beverages included. “People were often asking to see the flowers since you can’t see them from the road,” she said. “The workshops aren’t so much about technical flower arranging skills but giving people the opportunity to tour the flowers and have a bounty of flowers to arrange.”

All the meat and flowers produced at Pasture Song are direct-marketed. Customers can purchase individual cuts of pork and chicken at two farmers markets or from the farm stand. They also offer meat shares and meat bundles, which provide customers the opportunity to purchase larger volumes of meat. Flowers are available at the farm stand and farmers markets, and they also sell to a few florists.

In 2020, the couple added two Hereford cow-calf pairs to the operation, which graze on the 50 acres in a nearby town. They plan to build their breeding stock and will also source some Jersey Wagyu crossbreeds from a local dairy farm. “I really enjoy working with cattle,” Osborne said, “and it will be great to have another product to offer our customers.”

As their farm name implies, their current and future farming plans are guided by their belief in pasture – for the health of the land and livestock. “It’s also important to recognize the way we’re farming is made possible because of where we live. It’s not like we could go anywhere and farm like this. There is a lot of small farming going on around us, and a lot of industry has cropped up to support farmers. We can call the roaster, and they’ll be here within a few days. We didn’t have to go borrow a bunch of money and put up all of our infrastructure,” said Dunphy.