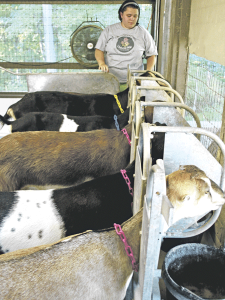 Not long ago, Sasha Hayes and Madison Horn were working in careers unrelated to production agriculture. Although they didn’t envision themselves operating a goat dairy, that’s what they’re doing today.

Their first goats were Horn’s mother’s Nigerian dwarfs, which are usually kept as pets, but today, the women are working on a dedicated breeding program to produce the best possible goats to make milk for their farmstead cheeses.

After realizing that building a goat dairy would require a strong breeding program aimed at producing goats with higher production capability, Hayes and Horn researched various breeds. Today, the primary dairy breeds at Clover Top Creamery in Charlottesville, VA, include LaManchas and Alpines. Hayes said she and Horn are tracking pedigrees and performance carefully because they realize those aspects are critical to a good dairy program.

“The breeding program is based on LaManchas,” said Hayes, adding that they like the temperament of the breed. “Our bucks are LaManchas – we know a little more about them. We also have some high-producing Alpines.” The herd includes 60 adult goats along with some select doelings being raised as possible herd members.

Hayes said the crossbred goats are proving to be sturdy and strong. “They go in, eat and don’t put up a fuss,” she said. “We don’t want to put them in a position where they’re stressed. This year we are milking 27 goats. The majority of milkers are LaManchas. Last year we bred our Alpine does to a LaMancha buck because we don’t have an Alpine buck and we don’t want to overcrowd the buck area. We aren’t sure if we’re going to continue with the Alpines but the Alpine/LaMancha crosses are turning out to be a great goat for what we need.”

The first year, goats were milked two at a time with bucket milkers; they now have a pipeline system. During the twice a day milkings, six does come in; three are milked at a time. Does are dry through winter, then start to kid from late January through March.

With breeding and due dates and cameras in the kidding barn, does can be managed properly and monitored as they approach kidding. Hayes said although they watched the does a lot more closely at first, time and experience has helped teach them how to determine the signs of impending kidding. “We make sure the kids are dried off and that Mom is letting them nurse,” she said. “We leave them with the moms until the colostrum is gone. We find it’s easier on us if the kids have a little extra time with Mom.”

After a few days with the doe, kids are raised on bottles, which Hayes said makes kids easier to handle as they mature. Kids are raised in groups of six according to age and sex for ease in feeding and management. Hayes said their breeding and kid management program focuses on the three Ps: personality, production and parasite resistance.

The biggest parasite issue is one shared by many small ruminant producers – barberpole worms that lead to severe anemia. “With the weather in Virginia and hot, humid summers, it’s parasites’ happy place,” said Hayes. “But a lot of our animals do well, and we can treat those that have a problem.” She added that they’ve learned to spot the early signs of parasite issues, including mood, which requires being tuned into the herd. “If a goat comes into the parlor and doesn’t want to eat or doesn’t finish her food, that’s a sign something is wrong,” said Hayes. “We check eyelids (FAMACHA) and Madison checks fecal samples to make sure we’re treating for the right thing.” Hayes added that Horn’s prior experience as a vet tech is useful when it comes to diagnosing health issues.

Horn took a cheesemaking course to learn the art. Hayes said Horn’s science background and skills are perfect for cheesemaking. “We have a manufacturing grade permit in the state of Virginia which allows us to make cheese,” said Hayes. “We can pasteurize our milk for fresh cheese, and use raw milk to make cheese that’s aged at least 60 days.” She noted that adding other dairy products would involve different equipment and additional permitting.

A variety of fresh chevres are produced at Clover Top. “We have five flavors,” said Hayes. “One of them is drained a little longer so it’s drier, then we roll it in Marcona almonds and drizzle spicy honey over it. It’s one of the most recent products we’ve added.”

Hayes describes one aged cheese as a geode because that’s what it resembles. “In Switzerland, they refer to it as Belper Knolle,” said Hayes. “We make the raw chevre, then put fresh garlic in it, then roll it into balls. Next, the cheese is rolled in toasted, freshly ground peppercorns and aged for at least 60 days, and the aging process results in the geodes acquiring a parmesan-like texture.” She said this cheese is best used shaved or grated over salad, potatoes, pasta or any other dish that needs a pop of flavor.

When Horn traveled through Vermont and saw on-farm stores selling cheese and other products, she decided to do something similar at Clover Top. “It gives us a chance to touch base with our clients personally,” said Hayes. “We also sell cheese at the Charlottesville City Market every Saturday. When we have extra cheese and enough time, we go to other markets in smaller towns during the week to get our name out there. We also sell to several stores in Charlottesville and neighboring towns, and to several wineries.”

Clover Top Creamery is a truly family business, with help from Horn’s sister Abby, mother Hillary and aunt Alli. While their business plan includes milking up to 50 does, Hayes said they’re in no hurry to get to that point. “We would consider a different license to allow us to make different products in the future,” she said, “but for now, we’re concentrating on perfecting what we’ve started. Even though there’s a lot to do, each day brings something unique.”