For Jim Stefanik and Sharon Roulier, the Hampden County Beekeepers organization is very much a family affair.

A native of Agawam, MA, Jim has been keeping bees for over 25 years. His daughter, Sharon, grew up learning from Jim firsthand, and officially began beekeeping in her own right five years ago. The father-daughter team was on hand to represent the organization at the annual Eastern States Exposition (the Big E) in West Springfield, MA. 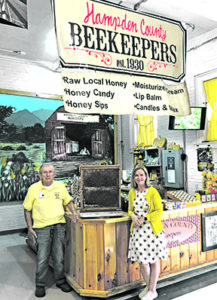 The Hampden County Beekeepers has over 250 members throughout western Massachusetts. The group was founded in 1930 with the objectives of furthering the advancement of apiculture, providing for the mutual help of its members and educating and promoting the benefits of beekeeping to the general public. In addition to providing networking opportunities to its members and monthly meetings, Hampden County Beekeepers moreover maintains a large presence at the Big E.

“We’re here to educate and inform the public about bees and beekeeping,” explained Sharon. “We have displays, information flyers and a live observation hive, so people can actually learn about the lives and functions of bees right here at the fair.” Guests can also sample and purchase a variety of the association’s members’ products. Sharon pointed out that it’s not just about raw honey – “although there is plenty of that! But there’s also honey candy, lip balms, candles, wax bars and moisturizer creams.”

To extend its reach to a more ample area of aspiring apiarists, Hampden County Beekeepers will be conducting its 2022 annual “Bee School” in a virtual format. The six-session course will take place from 6:30 – 9 p.m. via Zoom on Jan. 13, Jan. 27, Feb. 10, Feb. 24, March 10 and March 24. This Bee School program caters to those without previous experience and covers everything a budding beekeeper would need to know to start beekeeping. Membership to the Hampden County Beekeepers Association is included for all Bee School students, allowing them access to more advanced classes later in the year. Those taking the course are eligible to win prizes, including a complete beehive and a starter colony of bees.

Jim is happy the classes will go on. “Being a beekeeper is good for the world! And this way, we don’t have to cancel the school [because of the pandemic shutdown]. People can still learn what they need to on the computer.”

And Jim emphasized that there is a lot to learn. “People get to learn how to be a beekeeper and learn about bees in general. It starts out very basic: ‘What is a hive?’ ‘Which one’s the queen?’ That sort of thing, and then it progresses from there.” Jim said a good starter hive should have about 10,000 bees. “With any luck, and a good queen of course, you could have 50,000 to 60,000 by the end of your season.”

Jim drives home that the importance of honeybees and just how much of our everyday lives are affected by them is often overlooked. “Not enough people understand the real value of the two and a half million honeybee colonies in this country. The honeybee is the single most important insect that has a positive impact on man. That impact is not just in the jars of honey and beeswax candles. It’s also things like almonds, watermelons, grapefruits, blueberries, pears, apples, pumpkins and a million other things. Bees pollinate nearly all the crops grown in the U.S.”

Jim believes that honeybees have more impact on our daily lives than any other animal. “Well,” he laughed, “there are cows. We do get milk, meat and leather from them. Cows are pretty great. But the cows eat hay, and hay comes from alfalfa seeds, and guess who pollinates the alfalfa!”