Growing the farm with meat goats 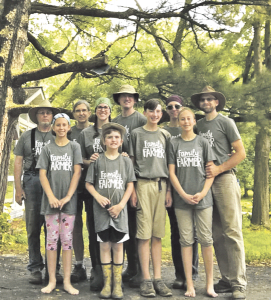 Tucked away in Central New York, the fourth, fifth and sixth generations of a farming family are working to live up to their brood’s mission statement: “To live lives of significance that we can share with our family and friends. Our aim is to produce quality products using sustainable methods that allows us to move responsibly into the future while protecting that part of God’s creation entrusted to us.”

Jim Taylor, owner and operator of Sunny Acres Farm in Athens, NY, is originally from New York City and came to Athens via New Jersey. His wife Debbie hails from Athens. “She actually was raised in the house we live in now,” explained Jim. The house was built by Debbie’s great-grandparents on what was the family farm in Greene County in 1897. Jim and Debbie bought the property from Debbie’s grandmother and founded Sunny Acres in 1975.

As time went on, he realized that switching the focus of Sunny Acres to meat goats made more sense. “First of all,” he explained, “the beef cattle market is very volatile, and that can undercut the stability of the farm. And you can raise seven goats on the same amount of space you’d need for a single beef cow. The market for goat meat was, for us, a much better bet.”

The demand for goat meat in the U.S. is at an all-time high, and continues to grow. Today, half of all the goat meat sold in the U.S. needs to be imported. “That stuff comes mostly from Australia. But they usually send feral goats, ones that they’ve processed in their mobile slaughter units,” Jim said. “Our goats are bred for this. We raise a breed called Kiko goats, derived from goats in New Zealand … plus, ours is fresh, not frozen. People here prefer ours.”

As for why goat meat has become more popular in the States, Jim said, “I think there’s two main reasons. Part of it is health-related; goat meat is very healthy. It’s a lean meat, naturally low in fat. It has a nice mild flavor to it, unlike lamb. The other part I chalk up to the increasing immigrant population both in the region and nationwide. Some immigrants seek out the goat meat because it’s a staple of their cultural diet. For others, particularly Muslims, there are religious restrictions on their diet, and goat meat is something they can enjoy.” Sunny Acres has focused on raising meat goats since 2002.

The goats raised at Sunny Acres are processed at a site in Monticello, in nearby Sullivan County. From there, the meat is distributed throughout the New York area, stretching east to New Jersey and west to Buffalo.

The farm itself sits on about 100 acres. “It was considered a bigger farm a hundred years ago than it is today,” laughed Jim. “It’s big enough for us.” By “us,” Jim means not just the herd of 25 does, but his entire family – he and Debbie, their three children and four grandchildren. “But not all in the same house!” he was quick to add.

In the future, Jim is looking to expand his offerings. “New York state law won’t let us sell any of our goat meat here on site unless it’s been processed at a USDA-approved processing site. We don’t have one here now, but there are plans to have one open nearby, less than 20 minutes from Athens, in the fall,” he stated. “Once that’s done we can sell our own goat meat right alongside our vegetables and eggs at our farm stand. I’d also really like to see our number of does get closer to my ideal number – about 100.”

And as for the all-important question: How does one best prepare goat? Jim deferred to the wisdom of his wife, “because it’s so lean and tender, you best prepare it slowly and while moist… My wife says the crock pot is your best bet.”