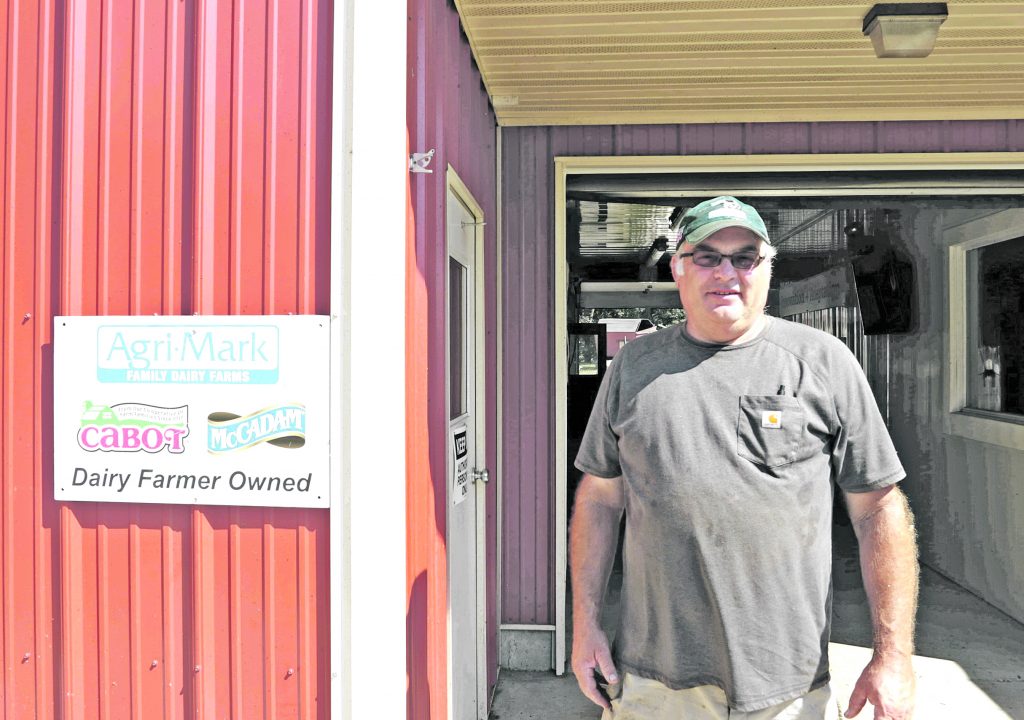 by Laura Rodley
CARLISLE, MA – Great Brook Farm was the first farm in Massachusetts to install a robotic milker. When they installed it, the design included cow traffic flow, two electronic sort gates and a large bulk tank. They also designed the new barn with enough space to house two robotic milkers. After an eight-year wait, this past winter, the second robotic milker was installed.
In 1967 Massachusetts bought the 1,000-plus acres that is run as Great Brook Farm State Park. In a miracle of forward thinking, the Commonwealth saw a need to bring the abandoned dairy farm that came with the acreage, vacant for 20 years, back to life so people could see farming up close. Situated in Carlisle, it is 20 miles out of Boston. Not only would people be able to walk, ride horses and bike in the park on more than 20 miles of trails, they could visit a working dairy farm.
Massachusetts put an ad in Country Folks Newspaper, which Mark Duffy answered. He has leased the land from the state for the last 31 years and fulfilled the state’s dream by resurrecting the defunct dairy farm, now open to the public. “A gentleman had assembled a large number of small farms into his 1,000-acre farm close to Boston. It was a private operation,” said Duffy.
Over 100,000 people visit Great Brook Farm State Park annually. A high percentage of them come through the barn, including school groups and summer camps. “We work with them,” said Duffy, “fulfilling the educational component for each group.” The Commonwealth’s staff give most of the tours so Duffy and his employees can concentrate on farm operations and animal care.
Duffy farms 80 tillable acres within the state park. He also leases land in adjacent towns to have enough land to feed his cows. He raises 170 acres of hay for haylage and 130 acres of corn for silage for feed; both are stored in trench silos. The farm has 100 Holstein milkers, with another 100 head of young stock, calves and bred heifers. Each milking cow currently produces over 80 pounds of milk per day. He’s raising more replacement stock now that the farm has a second robotic milker.
The farm is part of the Agri-Mark Cooperative, and, as member-owner, Duffy sits on their Board of Directors. He is also on the Board of the Massachusetts Association of Dairy Farmers and the New England Dairy Promotion Board. Duffy serves nationally on the Executive Committee of Newtrient LLC, which focuses on innovative solutions in resource recovery for dairy farms.
In addition to operating the farm, the family has an ice cream stand. April through October, they feature 60 flavors of ice cream, frozen yogurt, sherbet and sorbet. In yet another diversifying arm of business, they sell composted cow manure.
Duffy raised his family on the farm with his wife Tamma, a key partner. They work full time on the farm. They have three grown children, daughter Marlow and sons Christopher and Blake. Christopher works full time off the farm but puts in many hours helping out on the farm. He graduated from SUNY Cobleskill and interned in New Zealand, working with robotic milkers. He worked for DeLaval in North and South America, and now works for the local dealer. Marlow works as an ingredient buyer for Ken’s Foods Inc., and helps out with the ice cream operation and the farm’s social media. Blake does landscaping and hardscaping design.
Before the first robotic milker was installed, they milked in a tie-stall barn with a pipeline. “Since we have a diversified farm, one of the major advantages to robotics is the labor saving. It changes the skill needs for our workers – robotics can milk the cows and we can focus on caring for them. With the farm being open to the public, they can see the cows getting milked whenever they come by,” said Duffy.
The disadvantage of being a lessee is “I don’t have equity in this land,” Duffy said. “There are many different ways to farm. Like many other farmers, what we do is try to use the resources that we have available to us. We are close to urban areas; that’s all part of what keeps us in business. We do not own a square inch of land, and because of that, we really count on using other people’s land.”
The state counts on them to teach people about farming. The farm is open to the public year-round. The public gets to experience modern sustainable agriculture in action. People get married on the grounds, high school seniors have their pictures taken and memorial ceremonies are held on the grounds for people who have loved the park. There are frequent mountain bike events and dog-related events. Eventually, they make their way to the farm’s ice cream stand.
This past August’s rain proved challenging. Like all farmers, his business depends on the weather. Besides having crucial timelines to bring in harvests such as hay, scheduled school or camp groups reschedule if it rains. Duffy takes the vagaries of the weather with a grain of salt. But, if it rains, he gets a chance to enjoy an ice cream cone.