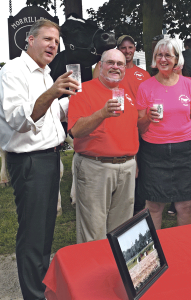 PENACOOK, NH – A bill to provide a way for grocery shoppers to voluntarily support New Hampshire dairy farmers by buying specially-labeled milk at a premium price – estimated at 50 cents/gallon – was signed into law by Gov. Chris Sununu on Wednesday, Aug. 7 at the Morrill Farm Dairy in Concord.

Gov. Sununu recalled at the bill-signing event that when Commissioner of Agriculture Shawn Jasper first talked to him about creating an avenue to allow consumers to choose to pay a premium for milk in labeled containers, he introduced it as “an interesting idea.”

“I told him it was ‘a great idea,’ not just an interesting one,” Sununu said.

Once the Dairy Premium program is activated, premium payments from milk sales will be collected from milk processors by the New Hampshire Department of Agriculture, Markets & Food, which in turn will make payments to in-state dairy farmers. Premiums will be paid on milk in containers labeled with a distinctive logo sold only in New Hampshire. The logo will also ensure that all dairy products are sourced either from New England farms or from New Hampshire-specific farms, depending on its wording.

Producers of New Hampshire dairy products other than fluid milk may also opt to participate in the program, which will be overseen by a Dairy Premium Fund Board set up by the ag commissioner.

The department anticipates that premium milk containers will be on store shelves before the end of this year.

“This initiative really builds on what we saw with the farm-to-table movement,” Sununu pointed out. “About 10 years ago, this whole idea started to really develop; it was a way to get local communities more involved in terms of how they can help their farms, their rural partners, all the indirect benefits when you support farming. In many ways, the dairy farmers were left out of that. This should help until the market corrects itself.”

Many details must be worked out with processors, distributors and market outlets. Some opposition still remains. Two months ago, a regional dairy association urged the governor to veto the bill, even though some of its members supported it, as per NHPR reporter Sarah Gibson. A spokesperson for Northeast Dairy Foods Association said that similar branding efforts made in Maine and Vermont had not met expectations.

Jasper said, “There is much work ahead of us to make the promise of this bill a reality, but after today we can continue in earnest with that phase. We now need to educate the public about the program and create the demand for the products.”

A key element will be the public’s ability to recognize these specially marked containers, Jasper noted.

Jasper started thinking about what could be done to help dairy farmers after he gave up being Speaker of the New Hampshire House of Representatives and was sworn in on Dec. 11, 2017 as a member of the executive branch. “As the idea for a premium plan rattled around in my head, I began to talk to people about the concept, and, as I did so, the plan evolved,” he explained.

In May 2018, Jasper put together an informal 10-member sounding board, including the day’s host, Rob Morrill. “Initially he was a bit of a critic of the idea, but, as I said, by talking and listening the idea improved,” he said.

Next, Jasper decided to see if the public would support the idea of paying a premium price to help in-state dairy farmers. He reached out to the University of New Hampshire and worked with Dr. Andrew Smith, director of the UNH Survey Center, to develop polling questions, in a process where sounding board members were a big help. 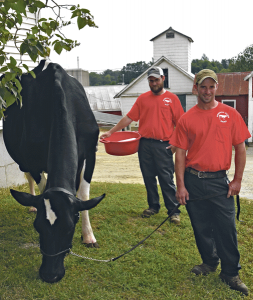 “Champions of New Hampshire Farms, a nonprofit organization, stepped up to fund that project,” Jasper continued. “We learned that over 80% of New Hampshire consumers would be willing to support this idea. To better gauge support, we also did in-store polling of customers who were actually buying milk, and these numbers held up.”

The commissioner thanked the effort’s funders: New Hampshire Farm Bureau (NHFB), AgriMart and Dairy Farmers of America – both farmer-owned cooperatives responsible for getting the milk from dairy farms to processing plants.

“In September 2018, we were ready to file a bill,” Jasper said. He thanked prime sponsor Rep. John O’Connor of Derry, a Republican who earlier had chaired the Environment and Agriculture Committee. The bipartisan bill’s co-sponsors were Rep. Howard Pearl (R-Loudon) and Sen. Jay Kahn (D-Keene). He also thanked Rep. Peter Bixby (D-Dover) as vice-chair of the E&A Committee and who made sure all the details in the legislation were right.

Jasper praised Sununu for his leadership. “Those of us who care about the future of dairy farming in New Hampshire owe our thanks to our governor,” the ag commissioner said. “This was not a case of merely asking the governor to sign the bill; he’s been a key player in getting us to this point.”

NHFB president Denis Ward said that the nonprofit federation had been very involved in the dairy premium bill. “But Commissioner Jasper has been the main architect, right from the start,” Ward explained. “There’s been some skepticism but really not much pushback. This is a great day and event.”

Between tumbling milk prices and falling demand, dairy farmers have not had a whole lot to cheer about for several years, he said, adding that all the stakeholders have high hopes this bill will help change that.