Goodnight Brothers cure hams to feed consumers across the nation 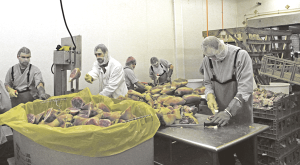 BOONE, NC – Standing in one of the production rooms of his family’s 50,000-square foot ham house, Bill Goodnight watched a team of his company’s experienced butchers in action, separating ham hocks and femur bones from whole country hams.

Thanks to the efforts of the butchers – and many others – Goodnight Brothers purchases just under 12 million pounds of fresh hams each year to cure approximately half a million whole country hams.

There are companies which produce more pounds of country ham every year, but they mainly deal in whole hams. Goodnight Brothers is the country’s leader in producing sliced and pre-portioned country ham servings.

Their signature product is a 1.25-ounce slice of country ham, perfect for serving on biscuits. That’s one reason Goodnight Brothers’ customers include Bojangles’ and Hardee’s.

“All of the boning is done by hand,” Goodnight said, watching his team work. “Save for the skinner and the band saw, the butchering in this room is all hand-work. It takes good sharp knives. And training. And a major focus on safety. Employees, you can see, are the key component of our business.”

Goodnight Brothers employs 135 people, all of them full-time. “Many of them have been with us more than 15 years,” Goodnight said. “Our operations manager, Rodney Farthing, has been here longer than me – forty years.”

The business began in 1948 as a produce company. The founders – ancestors of Bill, today the company’s vice-president, and his cousin Jim, the company’s president – started curing country ham, climatically, as a way to give their employees work in the winter months.

The company receives six to seven loads of fresh hams to its BRC-certified facility every week, each load containing 40,000 pounds of ham. The hams are salted the day they come in and then again five days later.

The company’s regular product is aged first in the winter room, at 40 degrees, before being moved to one of the 55-degree spring rooms, then to one of the 90-degree summer rooms.

The hams are stored on racks made from wood, which the Goodnight Brothers are permitted to use because of their history of long use.

“We were grandfathered in,” Goodnight said. “We’ve been using them for 70 years and never had an issue.”

In 1996, the company moved from its original location, in downtown Boone, to its current location on the outskirts of town.

With experience across four decades, Goodnight is seeing something today in the pork industry which he’s never seen before. “I’ve never seen prices this low this long,” he said.

The USDA defines country ham, among other ways, as having an internal salt content of at least 4 percent and having a weight at least 18 percent less than the weight of the initial fresh uncured ham. Goodnight Brothers hams have a finished salt level of 7 percent and exhibit 21 percent shrinkage. They also have a water activity of 0.89, which helps make the product shelf-stable. 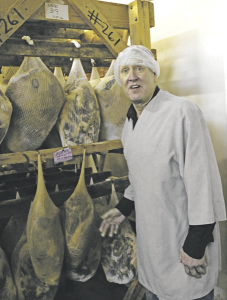 To make the best pre-portioned ham slices, the Goodnight Brothers like to start with a ham which is slightly smaller than the average ham – a ham which weighs between 20 and 23 pounds. The smaller size permits the hams to cure a little quicker, but more importantly, results in a final slice of ham being just the right shape and thickness for a biscuit.

Goodnight Brothers buys fresh hams from a variety of sources, including Clemens Food, Smithfield and Villari Foods. In addition to Bojangles’ and Hardee’s, Goodnight Brothers sell their country ham to the food wholesalers Sysco, U.S. Foods and Cheney Brothers. They also sell to a variety of smaller customers and make custom branded products to fit just about any kind of business.

There’s no doubt the 1.25-ounce sliced country ham product is the mainstay of their business. In 2015, when business was not quite as large as it is today, Goodnight calculated they had sold 40 million individual slices of country ham that year – enough to form a line of country ham biscuits all the way from Boone to Las Vegas.

Goodnight Brothers sells other products in addition to individual portions of country ham. They sell whole country hams, more than a dozen other cuts of country ham, and pork skins and bacon.

In recent years, they have also produced an ever-increasing amount of natural country ham products, cured with celery powder rather than synthetic nitrites. The natural country hams also age longer than the standard hams, up to 12 months, including longer in one of the warm summer rooms. They are also made from hams grown by a cooperative which uses heritage breeds and pasture raises its hogs.

Goodnight Brothers’ natural country ham is available as three products: side meat, thin sliced (like prosciutto) and biscuit cut. They are found widely in grocery stores like Whole Foods and EarthFare.

“I would like to build another aging room to accommodate more production of all-natural ham,” he added. He’s thinking a 10,000-square foot space would suffice.

One reason Goodnight Brothers has need for more aging is because they have also partnered with Lady Edison, a North Carolina supplier of animal welfare-approved extra fancy country ham to gourmet markets around the country. Goodnight Brothers ages the Lady Edison hams, which are cured for 18 months, sometimes with the leg on.

“All my career I’ve been trying to sell country ham outside of the Southeast,” Goodnight said. “With the Lady Edison product, I’ve been able to do that.”

Goodnight started working in the family company in the early 1980s, when he enrolled in Appalachian State in Boone.

“I worked in the ham house through college,” he said, before joining the company full-time after graduating from college in 1985.

At the time, the company was receiving a load of fresh hams each week and shipping 2 million pounds of country ham each year. During Goodnight’s tenure with his family company, the scope of the business has expanded six-fold, and is still growing.

“It’s really the only job I’ve had,” Goodnight said. “You’re either cut out for this business or you’re not.”