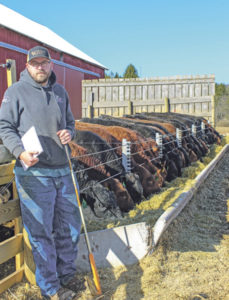 Not everyone has a clear plan for post-college pursuits, but while Austin Kolb was studying for a degree in animal science at West Virginia University, his future became clear: he’d continue farming on the Garrett County, MD, farm that has been in his family for generations.

Since the campus was less than an hour from the farm, Austin spent summers making hay. At the same time, he started to concentrate on developing a beef herd. “We grew some crops, but it wasn’t until after I graduated that we ramped up the grain cropping business,” said Austin. “We started with only 150 tillable acres on the home farm. It has been a long, slow process to expand to the acreage we farm today.”

Austin and his father Marvin are farming 2,500 acres today at Rolling Vale Farms and building a genetically superior beef herd. To improve the herd, comprised primarily of commercial Angus cows, the Kolbs purchased registered Simmental and SimAngus™ bulls to breed up the Angus cows, which then produce registerable progeny. They also purchased registered Simmental and SimAngus females to further expand the herd.

Austin travelled throughout the U.S. and Canada to look at exceptional cattle to improve the herd, concentrating on Red Angus, Simmental and SimAngus.

“With the Simmental breed, you can transition commercial cows to registered cows by breeding with registered (Simmental) sires,” said Austin. “The offspring can be registered as Simmental-Angus crosses, or SimAngus, at one-quarter Simmental.”

During a trip to Montana, Austin learned of a prominent Red Angus breeder who was having his bulls fed at a feedlot. “There weren’t a lot of Red Angus on the East Coast, and I knew the breed was starting to take off,” said Austin. “I purchased 40 bred cows and had them shipped here from Montana.”

In the East, the main market for Red Angus bulls is for use on commercial Black Angus-based herds. “Red Angus are a different breed – not just a different color of the same breed,” said Austin. “They were the same breed long ago, but it’s been long enough that the genetic pool is different enough that when you crossbreed to a Black Angus cow you get heterosis, which is what everybody wants in commercial cattle.”

For those who want to improve quality while preserving the overall type in a commercial Angus-based cowherd, Austin said using a Red Angus bull will result in predominantly black calves – a regionally important trait – with quality from Red Angus genetics.

“The Red Angus breed emphasizes carcass quality,” said Austin. “A lot of our customers who finish and sell beef directly to consumers use Red Angus bulls. They love the breed because they’re efficient on feed and finish easily.”

Retention of visible Simmental qualities are the reason SimAngus have gained popularity. “A commercial producer could easily use a purebred Simmental bull on Angus or Angus-type cows for optimum heterosis,” said Austin, “but the offspring might be less appealing for the Eastern market.” Austin added that while calves from this cross perform well, too much Simmental influence can hinder marketability at auction.

Austin’s found that a good SimAngus bull used as terminal sire contributes growth, muscle and thickness, but maternal traits are just as important. “The Simmental breed brings superior females with milk, good bone and structural correctness,” he said. “People who are into SimAngus love retaining their own heifers and appreciate how fertile and productive they are compared to traditional Angus cows. We want to temper the good qualities of the Simmental with what people expect of a good beef cow and sell them a ‘meet in the middle’ animal.”

Rolling Vale Farms maintains a spring calving schedule, and cows are expected to produce a calf every year. Prior to breeding season, Austin carefully evaluates each cow and selects a sire based on her qualities. “I’ll look at a cow, her production history and how her calves have done based on different sires we’ve used on her,” he said. “I’ll look at her temperament, structure, pelvic measurement, rate of gain as a calf and rate of gain on feed, then choose a bull that best complements her. I can produce a better animal that way.”

After synchronization, heat detection and several timed breedings, heifers are bred first, on April 20, to allow the Rolling Vale crew ample time to focus on heifers during calving. After cows are bred on May 20, all females are moved to summer pasture in groups of 20 to 30 with a bull. Females remain on pasture through summer, then return to the home farm in November.

While some beef producers use ET to produce more offspring from superior cows, Austin has chosen not to. “I’m extremely picky about my cows,” he said. “To replicate genetics through ET, you should have the ideal cow, and I haven’t found that cow yet.”

Rolling Vale Farms focuses on safe and stress-free cattle handling. “We like to work cattle without talking,” said Austin. “All you need to work cattle is body language – we don’t need to talk or make any noise.” Working cattle safely and quietly requires constant awareness of one’s location in the animals’ frame of reference and applying pressure at the right time.

The Kolbs’ hands-off policy helps ensure calm cattle that can be worked with as safely as possible. “We don’t touch our cattle,” said Austin. “We want a bull to move easy and calmly and never have a bad experience with humans, and we want him to know we’re still the boss in the field. The moment he learns otherwise, we’re in a dangerous position.” He added that it’s important to maintain and be aware of the animals’ flight zone and when they’ll sense pressure to move. “If you get in the pressure zone, they’ll get out of your way,” he said. “We don’t want them to be afraid and jump over a gate.”

All Rolling Vale Farms cattle are sold by private treaty. Customers can select a bull at any time after weaning in October, but bulls remain on the farm until mid-April, when they are tested to ensure they’re producing viable semen.

Austin said the farm’s recent effort to promote genetics through social media and a mailing list has worked out well, and that customers often return to purchase more animals after seeing how well Rolling Vale Farms cattle handle and perform.