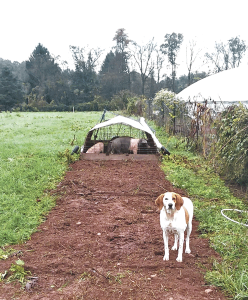 When pasturing pigs, there are always valid concerns about damage done to soil through their rooting behaviors. Frequently moving pigs to prevent them from damaging the soil structure once the vegetation is cleared is one of the key aspects of keeping pigs on pasture. Pigs love to graze, and utilizing their ability to do so, while enjoying a wide range of fodder, is a quick way to clear new ground for planting.

Dru Peters and Homer Walden of Sunnyside Farm in York County, PA, raise vegetables, herbs and eggs and offer pastured meats (poultry, pork and beef) while their daughter runs her own business on the farm raising flowers. They’ve been on the land for a decade, and have developed their own mobile pen system to accommodate not only the poultry but the pigs.

Walden designed the mobile pigpen, which has gone through several incarnations, so that the pigs are preparing the soil for the beds that will be used to raise their crops. The pens are four feet wide, just the right size for a wide planting bed, and 12 feet long. They’re big enough for the pigs to move around and graze in without being crowded, and have enough height so that the pigs aren’t crowded or uncomfortable.

The pens are sturdy, with wood or PVC frames and goat panel fencing. They have a truck tarp over most of the area for sun protection, and contain a PVC tube fitted with pig nipples which holds six gallons of water. There are two solid wheels for moving the pen. The pens need to be moved when the water pipe is almost empty – if the water is full, the pens are too heavy to lift.

A rope system and leg power is all that is needed to lift the pens onto the wheels and roll them to fresh ground. Each pen – which is also easily converted to house chickens, laying hens, sheep or turkeys – costs less than $400 to build and will last for years.

“The wheel system has to work very elegantly in order to make it really easy to move,” Walden said, while the frame must be sturdy enough to withstand the 60 miles per hour winds which gust routinely in their windy location.

The pens, no matter which animals they are housing, are pulled from the front, not pushed from the back. Peters saw no benefit to having to walk across the freshly tilled and fertilized ground when moving a pen.

The couple purchases piglets each spring from a neighboring farm which breeds and raises pastured pigs. The pigs are an assortment of breeds, and all have performed well in the system.

Each mobile pen is used to house four pigs who call it home 24/7 until they reach about 200 pounds. At that point, they are too strong and large to continue with the pen and are moved into a fenced paddock and trained using an electric wire. The training is easy, Walden said, and after being enticed through the wire once or twice with food, the pigs learn to avoid it at all costs. After training, the electric wire is no longer needed and can be removed. The pigs don’t stay in the area long, as they are soon sent to slaughter.

“They do some serious clearing of ground in a very short time,” Peters said. “If you’re seriously considering doing this you need to have space for them to dig up.”

The four-pig mobile pens are placed on ground where new beds are being prepared. It takes about 30 minutes for the pigs to clear the area under their pen, and they are provided with other foods such as waste vegetables, broken eggs, weeds from the hoop houses and bakery scraps. They don’t feed any grain.

“What we’ve learned is that there’s always things that pigs can help dispose of on a small, diversified farm,” Peters said.

The pigs are moved a minimum of once per day, but typically are moved several times. The area they’ve cleared and fertilized is a bit rough and needs to be raked out, but otherwise is ready for leaf mold, woodchips or other soil amendments in preparation for planting the clay soils. The beds on the farm are 200 feet long, and it takes about three days for one pen of pigs to clear the row.

“It doesn’t take much time at all for them to clear out a lot of ground,” Walden said, and after 10 years on the farm using the mobile pig system, there’s not a whole lot of ground left to be cleared.

The pigs aren’t the only ones who enjoy fresh pasture via mobile housing on the farm. Fifteen pens, built on the same type of mobile frame as the pigpens, are designed in an A-frame style for the laying hens. No matter the animal, the base of the pens is the same, but the height, shape and other design features are customized to each group’s needs. Turkeys are housed in taller pens, while the broiler chickens are in pens without the roosting area and easy-access egg collection system designed for the laying hens.

The egg layers, of which there are more than a dozen breeds, produce eggs in a rainbow of colors and a variety of sizes. The farm mixes these eggs in each dozen, a unique sales technique that attracts customers and helps their eggs get noticed.

The beef cows enjoy the lush pastures left behind the birds as their pens move forward bit by bit each day. But the hens won’t rotate back to the same ground again for about one year.

“These chickens will scratch almost everything off the ground, and what comes up after that is unbelievable,” Peters said.

Mobile pig pens have allowed Sunnyside Farm to provide the pigs with pasture access while putting them to work clearing beds for the farm’s crops. The innovative design of the pens, adaptable for numerous livestock species, durable and yet easily moved, has allowed the couple to capitalize on the benefits of pastured meats without the risk of livestock losses or damaged soils. A perimeter electric wire placed outside of the mobile pens has kept predators at bay.

The couple was inspired to pasture pork in mobile pens, not content with stopping at the typical poultry species, once they discovered that “the quality of the egg, and the quality of the chicken, was so far superior” when the birds were on pasture. They wanted to get the same benefits for their pork.

Not only are they growing a tastier, healthier pig, they are also reducing labor and waste on the farm by using mobile pigpens.

“It’s an easy and efficient way of cleaning things up on the farm,” Peters said, and because the pigs are moved so frequently, the soils are not damaged but enhanced.

The couple spoke at the 2019 PASA Sustainable Agriculture Conference, and recently presented a webinar sponsored by the non-profit Food Animal Concerns Trust (FACT).