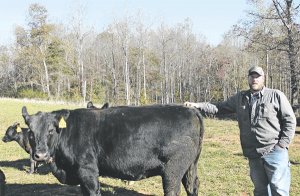 Today, Goforth Angus provides seedstock to producers in North Carolina, Virginia and other states in the Mid-Atlantic and Southeast, as well as nationally.

Having been a commercial producer and being a registered breeder, Goforth knows the needs of both sides of the industry, and breeds accordingly.

“What we’re looking for is a good-looking production animal,” he said. “We want mothers that are good at producing milk. We want animals that get a lot of growth and have a lot of look in them. We want to keep carcass weight. And we want a strong average daily gain – I think every herd needs that.”

Goforth built his registered herd by sourcing from some of the nation’s finest Angus breeders. He got donors from Spruce Mountain Angus in Colorado. Other genetics came out of Wisconsin, from Riley Brothers Angus and Gaffney Family Cattle, including a donor from Gaffney’s noted dam RB Lady Standard 305-890.

“I always wanted a daughter out of her,” he said.

Today, Goforth traces most of his cows back to Lady Standard 890 genetics. One of those daughters, RB-GFC Lady Upshot 890-3144, raised a bull which Goforth has since entered into the stud service at Universal Semen Sales. That bull, Goforth Admiral E25, born in January 2017, ranks in the top 1% in the following EPDs: weaning weight, yearling weight, carcass weight, residual average daily gain, calving ease maternal, feedlot value and beef value.

Lady Upshot has also produced a daughter, AAA #18332124, sired by Connealy Black Granite, with a lot of potential. “She’s one of our upcoming promising donor cows,” Goforth said.

Goforth keeps his genetics strong by flushing and using ET. AI is used only for first-calf heifers. His vet is Brent Scarlett of Scarlett Mobile Large Animal Services, based in Asheboro.

Goforth’s herd currently numbers 80 cows. He’s keeping bred heifers with the goal to grow to 200 cows. He works with a cooperator with land in North Carolina and South Carolina who runs some of his recip cows.

One thing Goforth likes about registered animals is they are highly efficient on feed. He feeds his heifer calves seven pounds of grain a day, his bulls 10 pounds of grain a day. First-time heifers when calving are provided alfalfa. In hard winters, he supplements with silage. For warm-seasons forage here in the fescue belt, he drills crab grass into fescue.

Goforth sells his bulls regionally at the Southeast Bull Expo and Sale in North Carolina and the bull test station in Culpeper, VA. He also takes them out west, to Montana, to the Midland Bull Test. He takes females out west, three or four animals each year, to the National Western Stock Show Angus Foundation Female Show.