Goats, caramels and the Big Picture 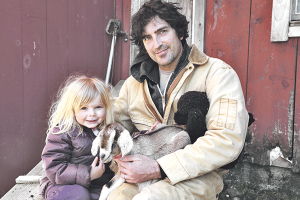 There are a few select awards that recognize the very highest level of achievement in a craft. Film actors have the Oscar. Musicians have the Grammy. Even advertisers have the Clio.

Specialty food producers have the sofi Award, and the husband and wife team of Lucas Farrell and Louisa Conrad, owners and operators of Big Picture Farm in Townshend, VT, have just added two more sofi Awards to their growing collection.

Since 1972, the sofi Awards have honored creativity and taste across 49 categories of specialty foods and beverages. The awards are sponsored by the Specialty Food Association, a nonprofit trade association that fosters trade, commerce and interest in the specialty food industry. The organization’s membership is made up of over 3,800 specialty food artisans, purveyors, importers and entrepreneurs as well as distributors, retailers and others involved in the specialty food trade.

In response to new safety protocols necessitated by the COVID-19 pandemic, the 2020 entries were held this spring in a new facility, one with greater amounts of space to allow for social distancing. The Rutgers Food Innovation Center in Bridgeton, NJ, a part of the New Jersey Agricultural Experiment Station, hosted a bevy of judges from a variety of businesses and organizations.

The move was lauded by its participants.

“I like that it’s in a facility,” said judge Helen Park of Nestlé. “I like that it’s very separated so we each have our own samples. We go at our own pace and our own sequence and we really can focus on our own opinions about what we’re reviewing.”

“It’s cool to come to a new space,” added judge John Lawson of Whole Foods Market. “And with COVID, to use this space in a way that keeps us socially distanced and safe.”

Louisa and Lucas met while she was an art and anthropology student and he was studying environmental studies at Middlebury College. After completing graduate degree programs out of state, the two returned to Vermont. They soon began a six-month internship at Blue Ledge Farm, a goat dairy, in Salisbury in 2008.

In 2010, the pair purchased Peaked Mountain Farm, rechristening it Big Picture Farm. “We bought three goats and started making our caramels in the barn,” explained Louisa. “Then we began selling them at the Brattleboro Area Farmers Market.” Their success was immediate.

This led to expansion and growth. Today Louisa and Lucas oversee a staff of eight employees on their 100-acre operation.

Louisa described wrapped caramels as “our bread and butter. If you include our new flavor, ‘The Swirl,’ which is half-sea salt, half-chocolate, we now have 10 flavors.”

In addition to their caramels, they also began producing cheese in 2012 and chocolate in 2015.

Louisa admitted that their cheesemaking constitutes “just a small part” of the Big Picture operation. “It’s not something we would have done on our own, but the infrastructure we got when we bought the farm was already in place for making cheese,” she said. Big Picture offers two cheeses, “Sonnet” and “Haiku.” Louisa said it works out well that the cheesemaking takes place largely in the summer, when the goats’ milk production is highest and the caramel sales are at their lowest.

“Our chocolate-covered caramels have done very well. So have our truffles and goat turtles, which are made of sea salt vanilla caramel, cashews and dark chocolate,” she said. There are over a dozen chocolate selections currently available for sale.

Louisa estimated that 80% of Big Picture’s sales come from caramels, 15% from chocolate and 5% from cheese.

While customers can make their purchases at the farm itself, Louisa said it’s “not a true on-site retail” business. Instead, she has concentrated on wholesale and online sales. “We sell wholesale to about 1,400 gourmet stores, specialty stores, gift shops and museum shops across the country. We also specialize in corporate and holiday gifts,” she explained. Prior to this year, online sales constituted about 20% of the farm’s transactions. Now, due to the COVID-19 shutdown, Louisa said online sales are up nearly 400% and account for close to 60% of her overall sales.

Louisa is pleased with the caramels’ performance at the 2020 sofi Awards. “It’s very competitive, there are over 1,800 entries. This was the first year that the confections category was swept by non-cheese products,” she noted. This was the farm’s fifth gold award; they’ve also won a number of silver awards over the years. Louisa credits the maple syrup she gets from Plummer’s Sugar House in Grafton, VT, as a component of her success. “Sometimes, we even tap our own trees and take it to John [Plummer] to process.”

Looking ahead to Big Picture’s next chapter, Louisa has a few new initiatives to focus on.

“We’re working on getting a chocolate bark out for the fall. We also have a caramel, the ‘Caramellow,’ which has CBD [cannabidiol] in it. It’s been awesome,” she said. “We sell most of it in Vermont and a few of the other New England states. We’re looking at expanding that to other states that allow CBD products.”

Looking to take advantage of the growing interest in agritourism, Big Picture is also starting to offer lodgings on the property. “We have the original farmhouse, which can sleep up to 20 people, that’s available,” Louisa said. The farm’s renovated colt barn, which sleeps four, is currently being used for employee lodging, but Louisa hopes to have that available to agritourists soon. “It’s hard right now, because of the COVID-related travel restrictions in Vermont. But we want to be ready for when things open up.”