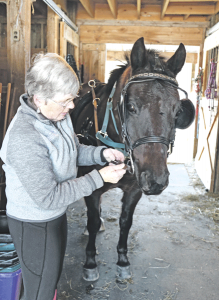 On a recent Saturday afternoon, Jenny Kimberly, a resident of Windsor, VT, drove her willing Morab (half-Morgan, half-Arabian) 11-year-old Lucas on a good ride. Kimberly’s significant other, Bruce Hickey, a retired farrier, likened Lucas’s power to that of a turbo engine.

Kimberly loves all things horses, and has all her life. “I had horses when I was a kid, and got them again 35 years ago. It was horses, boys, then horses,” she said. She owns three Morgans, a mule named Betsy, and a Percheron/Welsh cross white pony who is now at High Horse Therapeutic Riding. She is also a member of the Green Mountain Horse Association (GMHA), and has been so for over 25 years.

Founded in 1926, the South Woodstock, VT-based GMHA is the nation’s oldest continuously operating horse association. Started to buffer Rutland, VT’s annual horse show that was suffering from a deficit of entries, GMHA was born. Their mission: keep the horse show thriving and preserve and mark trails.

In 1927, they inaugurated a two-day, 60-mile competitive trail ride. The horse show was moved from the Rutland Fairgrounds to the Windsor County Fair in Woodstock in 1929. In 1932, the horse show was relocated to the Upwey Oval at Upwey Farms, destined to be renamed the Woodstock Horse Show. In 1935, GMHA had their first 80-mile trail ride, which has since expanded to its current day 100-mile ride.

World War II caused a brief break in the horse shows, which resumed at Upwey Farms after the war. By 1956, GMHA had purchased land in South Woodstock, where it hosted its first horse show on its own land with 167 entries, marking the largest field in any Vermont horse show thus far. In 1957, the GHMA horse trials were one of the first held in the United States since the U.S. Cavalry Team competed in the 1948 Olympics. It was also the first year of their annual Junior Horsemanship Clinic.

To expand on their 100 box stalls, the Annual Woodstock Horse Show was held as a fundraiser in 1961. By the early 1980s, GMHA was holding a second recognized horse show. By 2006, they added a third recognized horse show, and they now host competitions in five disciplines. Their calendar is full of events all year long.

Kimberly has ridden in the 100-mile CTR many times, and won it five times (four times with a half-Arab horse name Lyric, and the fifth time with a Morgan named Heidi). She has competed in driving competitions, sleigh rallies, pleasure shows and combined driving of dressage, marathon and cones.