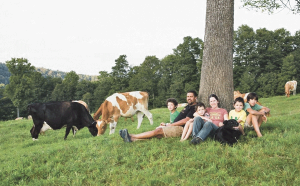 The COVID-19 pandemic has obliged many of us to rethink our day-to-day routines. Habitual tasks have been upended, and what used to be normal doesn’t seem so normal anymore.

Located on Rock Bottom Farm’s 1,000-acre plot in Strafford, VT, Strafford Creamery was founded in 2001 by brothers Earl, William and Berry Ransom. The three were raised at Rock Bottom, which was founded by their parents in 1963.

“We’re working the same as we always have,” said Amy Huyffer, Stafford’s CEO. “We really can’t do it any other way.” A graduate of Vermont College of Law, Amy married Earl Ransom in 1999 and has been working at Strafford since its beginning.

Strafford operates out of a 4,000-square-foot facility and with a herd of over 70 Guernseys. Apart from family members, the creamery has five full-time employees in both production and administration.

Amy described Strafford’s uninterrupted regimen: “We start early. The cows get milked twice a day, at four and four. We have to get the chores out of the way before the creamery’s crew show up – by 7 a.m. at the latest.” Strafford’s production team then starts their long day’s work at 7:30 a.m. It starts with putting together all of the creamery’s machinery.

“The creamery is like a giant puzzle we assemble daily,” Amy said. “At the end of every day, we take it apart for a thorough washing, and then we put it all back together the next morning and get to work.

“We process our milk into reusable glass bottles, using HTST (high temperature, short time) pasteurization. It best preserves the flavor and texture of the milk,” she continued. “We offer skim, 1%, 2%, whole, chocolate and non-homogenized, old-fashioned creamline milk.” They also produces half and half.

Despite production not being lessened by COVID-19, there has been one virus-related development affecting business at Strafford: Customers are not returning their glass bottles. The erroneous belief that they must dispose of glass bottles for sanitary reasons has made it necessary for Strafford to inform them via social media that they should continue to return the glass bottles as they always have. The creamery very nearly ran out of bottles in April, but is seeing more bottles returned now.

Mondays, Tuesdays, Thursdays and Fridays are dedicated to bottling milk. Wednesdays are set aside for ice cream.

“We attended the ice cream short course at Penn State University. It had people there from Edy’s, Hood – all the ice cream people,” Amy said. Strafford features vanilla, chocolate, strawberry and maple-flavored ice cream. “We have a small sugarbush here on the property. It has about 100 taps. Penn State said we couldn’t use our maple syrup to flavor our ice cream; they felt it would come out too sweet. I don’t think they realized all the different types and qualities of syrup we have in Vermont. It actually came out really well and is very popular.” Amy and Earl’s 17-year-old son Jackson oversees the farm’s sugarbush.

Strafford sells its product wholesale to retailers and cooperatives throughout Vermont and New Hampshire. “Strafford only has 800 people in it,” Amy explained. “It didn’t make much sense for us to set up a farm store. We really wouldn’t get the number of people here to justify having one. We’re in City Market in Burlington, the Brattleboro Food Cooperative. We have our stuff in over 35 retailers in the region. There’s actually a waiting list for people who want to carry our milk and ice cream.”