Getting the best soybean and wheat yield 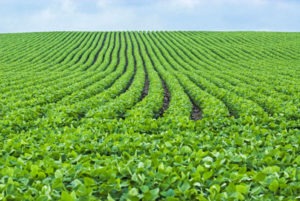 “Wisconsin is pretty similar to us as far as agronomics,” Stanyard. “The things he’ll be talking about are things that we can relate to.”

Conley said that two-thirds of the test plots his teams use for research are farmers’ fields. Many of those yield over 100 bushels of soybeans per acre. He believes that gathering large amounts of information and disseminating it to farmers is vital for improving yields.

“We’ve been talking this whole idea of big data,” Conley said. “What we’re trying to do is get at this big data approach and how we can use this data.”

A few years ago, his group redrew the maturity maps in the U.S. by gleaning maturity information from databases. Since New York is at the same latitude as Wisconsin, the findings for each state should be similar. The last map was drawn in 1980.

Conley said that differences between Wisconsin farms’ soybean yield from the 1980s and now “could be indicating differences in climate but also the differences in the soybean breeding. Breeders can effectively shorten the vegetative growth phase and give us more in the reproductive phase.” Management also affects yield.

The data were drawn from about 8,015 farms (equaling 600,000 acres) in the upper Midwest. Farmers provided the GPS locations and a team of undergrads drew where the fields were.

Conley said the researchers developed a technology extrapolation domain (TED) as a special unit with a combination of attributes such as weather and soil type “in which yield responses to a given technology can be expected to be fairly similar.” About half of his trial was no-till and half was conventional, based upon the management method of the particular farm. That strategy helps farmers apply researchers’ insights about a plot in Wisconsin to a plot in NY if the farm’s TED is the same. Analyzing the data can help farmers pinpoint their ideal planting date based upon their farm’s TED.

“Planting data is a big driving factor in soybean yield,” Conley said. “In TED 5R, after April 20, farmers lose nearly half a bushel per acre for every planting date delay.” With an earlier planting date, the plants have the opportunity to grow an extra two to three notes. Farms planting late may be sacrificing plant size, which means they cannot achieve maximum yield. The TEDs can also give guidance on seeding rates.

“Growers are collecting data at all times,” Conley said. “GPS and equipment advances have allowed for increased use of variable rate technology.” He added that growers are unsure which data layers to use when creating these prescriptions. They should also consider if it’s worth the time and investment.

Conley aggregated the soybean yield data from 20,926 plots from 211 replicated field experiments established from 2005-2017 within 12 states and Ontario, Canada. The experiments were aggregated in three clusters based on soil and weather. Planting early or late did not appear to make as much difference in areas that typically produce high yield crops.

Conley said it’s important to figure in the price of beans when making the decision to replant. For example, $15 beans may be worthwhile to replant a scantily populated field, but $8 beans would not.

He wants farmers to think about the main factors that can help them minimize the gap between their yield and the 120-bushel genetic optimal yield. “We have the reference treatment which is what the farmer typically does and the improved strip, what our algorithm says farmers should do,” he said.

Thanks to modern genetics, soybeans “put on three times the amount of yield than they did 30 years ago,” Conley said. “You don’t need to focus on erect, branch or stems.”

He said soybeans can be planted if the soil temperature is 46º F. “Typically, what we see is if you plant earlier, you’ll need a higher seeding rate,” Conley 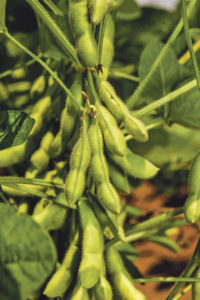 Genetics and variety selection also make a difference in achieving high yields. Like NY, many of the fields he plants in trials are near dairy farms, for dairy farms. For that reason, the test weight is a big driver for how a soybean field is managed. To boost soil fertility, “crop rotation and sequence are important,” Conley said. “The best rotation is corn, soybean, wheat, in that order.” He added that it’s important to understand the development and growth staging of winter wheat.

Conley encouraged farmers to plant new seeds each year. “Because of the challenges out there, plant certified or private, professionally prepared seed that is true to variety, clean and has a high germination percentage – greater than 85%,” he said. “Do not save seed from fields that received a glyphosate

For those who need to plant saved seeds, Conley encouraged first determining if they can legally plant the seeds they have saved, clean the seed, perform a germination test and then assess the need for a seed treatment.

“A lot of the new genetics out there, you can’t do it,” he said. “We strongly recommend you plant new seed every year.”

He also strongly recommends a fungicide seed treatment on winter wheat. He suggested a seeding rate for wheat planted from Sept. 20 to Oct. 1 as 1,750,000 seeds per acre.

“The yield penalty starts at September 25: a bushel an acre a day,” Conley said. “After October 1, we start to lose yield at a rapid pace. If you need to get it in any way for straw or cover, you should realize you’ll take a yield hit.”

He suggested a wheat planting depth of 1 to 1.5 inches, regardless of the planting date.

He begins increasing the seeding rate once he gets to mid-to late October. Conley tells farmers to apply nitrogen at the green-up stage. At week nine, that’s the time for foliar fungicide. To treat scab, he advised waiting until the anthers protrude.