Get your ROPS on 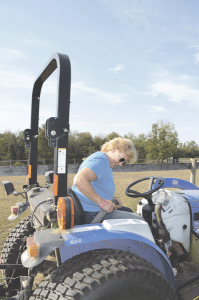 It’s almost spring, and tractors will soon be in the fields – and instruction for anyone operating a tractor is a key factor in preventing accidents and fatalities.

Dr. Aaron Yoder, associate professor in Environmental Agricultural and Occupational Health at the University of Nebraska Medical Center, said tractors are often used many hours each day, and the total time (exposure) to a tractor is greater than other equipment on the farm. Tractors are vital for a variety of tasks, including tillage, planting, portable feed mixing, baling, manure hauling, mowing, towing and as a stationary power source.

With tractor use comes the risk of overturns, PTO entanglements, falls, contact with hot spots that cause burns, road traffic and mechanical hazards. Understanding how to safely operate a tractor and prevent rollovers is one of the first lessons for a new operator.

Yoder said a significant number of tractor-related injuries and fatalities are related to rollovers. Drivers should be familiar with the two types of rollovers – sideways and rear – and understand how to prevent them. The sideways rollover is most common, and slightly less likely to be fatal than rear overturns because the operator is sometimes thrown away and clear from the tractor before it completes the overturn.

“One cause of rollovers is gravity,” said Yoder. “The center of gravity is outside of where the tires touch the ground, and centrifugal force turns the tractor in a direction we don’t want it to go.” Side rollovers can be prevented in several ways, including wide-set wheels to provide a more stable base, restricting speed according to conditions, avoiding “bounce,” slowing down on turns, using the engine to slow down on downhill grades, avoiding cross-movement on steep slopes, using caution around ditches and keeping the front loader bucket low when the tractor is in motion.

Rear overturns are more likely to be fatal, and happen very quickly, with just 0.75 seconds to the point of no return. “There isn’t an easy exit,” said Yoder. “You don’t typically get thrown off in a rear overturn. The instinct is to hold onto the steering wheel, and if the tractor doesn’t have roll-over protection structure (ROPS), it’s going to come back over on top and crush.”

The main cause of rear overturns is hitching too high. Yoder said sometimes the operator hitches to the top link of a three-point hitch rather than hitching to the drawbar – a dangerous move. “Also, starting out too fast or popping the clutch,” he said. “In three-quarters of a second, the torque will pull the front end up and start the tipping process. Once it hits the point of no return, there’s nothing we can do to stop it from going over other than ROPS, which limits the degree of roll.”

The main safety step to prevent rear overturns is to hitch properly to the drawbar. “That way, if the tractor becomes an immovable object or gets stuck, the front end comes up only a little bit and doesn’t tip the tractor all the way over,” said Yoder, adding that it’s also important to limit the height of a three-point hitch. “Make sure it’s balanced well – if we’re putting weight on the back, we have weights on the front to counteract those forces.”

Starting off slowly in low gear also helps prevent rear overturns, as does avoiding ditches and obstructions such as wash-outs. Yoder said it’s important to be aware of any new ditches formed as a result of autumn and winter flooding, washes or cave-ins, and to be aware that such ditches may have debris that hides the depth and slope. He also advises using extra caution when traveling on slopes, and recommends going straight up or down.

ROPS plays an important role in tractor safety. Their purpose is to limit rollovers to 90º and to protect the operator if the rollover does exceed 90º. It’s important to note that ROPS does not prevent rollovers from occurring. “The best thing is to prevent the rollover and not have to rely on the ROPS,” said Yoder, “but have it there just in case.”

An essential part of the ROPS system is seatbelts, which are required for ROPS to be fully effective. Although ROPS offers some level of protection without a seatbelt, protection is optimal when the operator uses one. During some tasks, such as spring cleanup that may involve multiple mountings and dismountings of the tractor, it’s important to allow time for the operator to use the seatbelt each time they return to the seat.

“Don’t wear a seatbelt on a piece of equipment that doesn’t have certified ROPS,” said Yoder. “If it’s homemade and collapses, or if there’s nothing on the tractor and you’re strapped in, there’s no chance of you being thrown away from the machine.”

ROPS is available as fixed or foldable. Fixed ROPS is a two-post bar that moves up and down; a lot of newer equipment has foldable ROPS. “One of the big issues [with foldable ROPS] is the weight and the force required to put them back up once they’re put down,” said Yoder. “A lot of people have difficulties with that – once they’re folded down, people don’t put them back up.”

There’s also concern resulting from an increase in people being injured on tractors equipped with ROPS, but operating the tractor with the it folded down. “Some European countries are banning the foldable ROPS and are requiring manufacturers to permanently fix them so they’re up,” said Yoder, adding that the temporary solution is either bolting or welding ROPS in a permanent upward position.

Newer tractors with cabs are equipped with internal ROPS. Owners of older tractors often put weather cabs, or canopies, on a tractor, but such structures don’t provide protection and can actually result in serious injury because they hold the operator in and don’t allow escape in the event of rollover.

The National ROPS Rebate Program provides rebates for rollbar retrofits. To see if your state is included in the program visit www.ropsr4u.org.