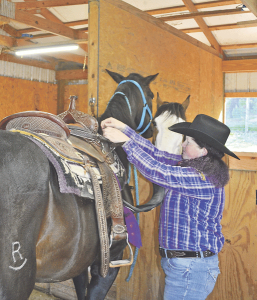 A wall full of ribbons is an impressive sight, but is it a confidence booster or a reminder of failure?

When she was 12, Jessica Rupp, of Aspers, PA, started participating in local shows in English classes. But her heart was set on barrel racing.

“I competed in hunter and jumper classes until I was about 16,” said Rupp. “But for me, English was starting to not be fun – I felt too much pressure.” That’s when she switched to youth and high school rodeo with a good horse that taught her a lot about barrel racing and pole bending. Rupp also benefited from lessons, help from friends and encouragement from her family.

Rupp was especially close to her grandfather, who had always been her inspiration and encouraged her to pursue her dreams with horses. When it was time to move on after high school, Rupp and a high school friend decided Meredith Manor International Equestrian Centre in West Virginia was the right place for them. She took two horses with her, but rode many others during her time there. As she worked up to Riding Master III, she had already started to pursue job options. After a phone interview and submitting a riding video, Rupp was hired by a cutting horse trainer in Texas.

She packed up her mare Poppy and left for Texas. When she became too busy to ride Poppy, Rupp was encouraged to breed the mare to a good stallion. Since barrel racers often choose horses from Quarter horse racing lines, Rupp did the same and bred Poppy to Jet Out Of Debt, a grandson of First Down Dash. The resulting foal, Pops Dashin Lace, or Laci, was born in 2005.

When Rupp’s grandfather was in failing health, she returned to Pennsylvania to help care for him and brought Laci home with her. Laci was just a little over one year at the time, and Rupp continued her training. Her other horse, a paint gelding named Romeo, was her competition horse.

Rupp planned to train Laci for barrel racing, but when the mare was three, she sustained a serious injury to her hip that required extended care for six months. Laci recovered without any lingering effects, and over the past several years, Rupp has used the mare for trail riding, western pleasure at local shows, benefit beach rides in South Carolina and mounted shooting.

But Rupp still wasn’t doing what she had her heart set on: barrel racing. “After Laci got hurt, I didn’t know how much she could take,” she said, adding that the vet wasn’t sure either until healing was complete. “I decided I was never going to push her to do anything she wasn’t capable of.”

Then Rupp had to come to terms with another issue: what people thought of her and the fear of failing in front of others. “I hadn’t competed in barrels for five years,” said Rupp. “I was just watching everyone else’s success – it was safer. The last time I took Romeo to a barrel race, I did well in exhibition but I hit a barrel in the actual run.”

Rupp was determined to overcome her fears, and last year, after encouragement from her family, she took Laci to a nearby barrel racing event. “It was extremely hard for me,” she said. “I was really nervous. I wasn’t even going to do exhibition, but I took her in, trotted the barrels and everything went fine.”

The next turning point came last autumn when Rupp and a friend went to Quarter Horse Congress. Her friend encouraged her to pursue her long-time desire to compete at Congress, and being there helped Rupp set that goal.

Rupp received another push to pursue her dreams when she saw a post on Facebook announcing a contest for a spot in a Martha Josey barrel racing clinic. Rupp put her name in and was surprised to learn that she had been selected, and chose to attend the clinic held recently in Ohio. 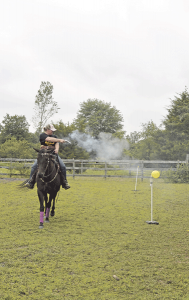 “I was going to take Romeo,” she said. “He’s my old faithful, but his arthritis is getting too bad and it isn’t fair to push him. I had to come to the reality that he needs to retire from barrel racing. My friend said ‘I think this is all meant to be – you won this and it’s meant for you to take Laci.’”

Rupp admitted she was nervous about taking Laci to the clinic; her mind filled with “what ifs,” wondering if she was going to fail. Rupp told her friend she’d be happy to lope one easy pattern by the end of the weekend. But in addition to barrel racing strategy and training, the clinic included a healthy portion of motivational encouragement. Participants learned the importance of laughing at themselves instead of being critical.

Although the positive talk helped, Rupp was still apprehensive. Prior to the clinic, she had only trotted barrels with Laci. “I didn’t want to push her too soon or mess her up,” she said. “But they told us to do what we had been doing, and I wasn’t the only one who trotted.”

The first session included horsemanship work as well as trotting or loping the barrel pattern. During the second session, the instructor worked with riders individually. “He had us trot the pattern then talk with him about what we wanted to work on,” Rupp said. “I told him I never loped her in the pattern, and asked whether to trot or lope. He encouraged me to go in and decide based on how Laci felt going in. He said ‘Get their mind working, their feet working, get them listening to you and don’t watch everyone else – get your own horse warmed up and focus on what they need.’”

The strategy suited Laci just fine. After some warm-up work, Rupp took Laci in and loped the pattern. “She didn’t rush or hurry,” she said. “I was surprised how fast Laci caught on and how natural it felt for her. Some of her turns felt effortless, even compared to some of the horses I used to barrel race.” Rupp’s first run at a trot was timed at 44 seconds. By Sunday, she had shaved that time in half without rushing.

Rupp will continue training and competing with Laci this season, and plans to attend AQHA Congress again, this time with Laci. She also plans to attend the Josey Ranch reunion barrel race in Texas next spring, open to past clinic students.

“Coming home from that experience completely changed my way of thinking,” Rupp said. “The clinic really brought my confidence up. They showed us it’s better to go slow and be correct because you can place higher than someone who goes fast.”