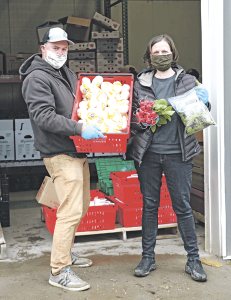 The owners of Warner Farm, Kitchen Garden Farm and Riverland Farm are all friends. They had been tossing the idea around of combining forces and becoming a collaborative (or cooperative).

When COVID-19 news hit Massachusetts full force mid-March, “we met to talk about it and flesh it out,” said David Wissemann, who has worked with his father, Mike Wissemann, for the last 10 years on the 150-acre Warner Farm, which has been in their family for 10 generations.

As all the farms are in Sunderland, MA, they named their unified operation the Sunderland Farm Collaborative. They were slated to provide high-quality organic produce and products for local schools and colleges like UMass Amherst and Smith College, and local restaurants – then came the cascade of school and restaurant closures. Rather than despair, David Wissemann and Emily Landeck of Riverland Farm and Caroline Pam and Tim Wilcox of Kitchen Garden Farm quickly realized that with the benefit of being joined as a collaborative, they could funnel what they already planned to produce to people in the surrounding communities.

To help people comply with the stay-at-home directive, they could offer and provide home delivery twice weekly to the towns of Sunderland, Whately, Deerfield, Hadley, Hatfield, Montague, Amherst, Northampton, Florence, Easthampton, Greenfield and Turners Falls. A $10 delivery fee is added for all home deliveries.

They made their first deliveries the first week of April. Since then, “we have been able to fulfill 350 orders at a time and go out twice a week,” said Wissemann, totaling 700 orders a week to 3,000 unique individuals.

They have an online platform at sunderlandfarmco.com where people can register as customers and order from all the different products during the period they are open for orders. Since they’ve started, not only do they offer products from their three main farms, they offer products from 25 other producers as well, including flour from Ground Up Grain in Hadley, eggs from Cream of the Crop Farm in Russell, apples from Shelburne’s Apex Orchards and C&C Orchards, cider from Carr’s Ciderhouse, tortillas from Mi Tierra Tortillas, Sfoglini Pasta, goat cheese from Thomas Farm, mushrooms from Mycoterra Farm, bread from Rise Above Bakery, products from Narragansett Creamery and Williams Farm Sugarhouse and coffee from different coffee suppliers including YUP Coffee Roasters.

The producers get a harvest list, a day to “harvest” it, and the next day everything is brought to the packing site.

For doorstep delivery, customers receive a call when the order is delivered. Their drivers are all wearing masks and gloves and their vehicles are sanitized.

They also offer four different pick-up sites which have the added advantage of drawing people to that site. Two of the sites are local breweries: Abandoned Building Brewery in Easthampton and Progression Brewing Company in Northampton. “Local breweries have been seeing decreased business. They really like seeing these orders come in. They also have refrigeration space, which is a requirement, making sure everything stays cold, like milk,” said Wissemann.

The other pick-up sites are at Millstone Farm Market at Warner Farm in Sunderland and Leverett Village Co-op in Leverett.

“I think the thing that surprised us the most was the tremendous demand. The first couple days we were selling out of capacity,” said Wissemann. As quickly as they could, they had to streamline their delivery routes to meet demand. “We only have so many vehicles. We had to work out how to use them as efficiently as possible.”

People have heard of them through word of mouth, and also through a local radio station that featured the collaborative over the airwaves in the station’s grassroots efforts to support local businesses, letting listeners know what businesses are still open, where, and how to contact them.

They have been working hard to scale up to meet demand – but they can’t hurry Mother Nature. “We understand it’s a rough time for produce. We are anxiously awaiting radishes and asparagus,” Wissemann said.

On Warner Farm alone, they are waiting for their approximately 10 acres of asparagus to finish growing and ripening. But not only are they all still in business, they are thriving, helping many other local businesses, and with an overflow of customers, it doesn’t look like it will taper off any time soon.