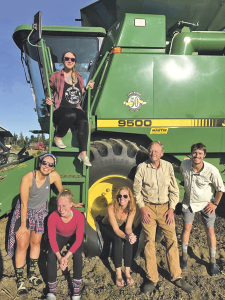 A continued search for value-added and the pull of heritage was what led beekeeper Todd Hardie of Thornhill Farm from bees to rye. Hardie, who went to ag school and apprenticed at apiaries in New York, spent most of his career in commercial beekeeping in New York and later Vermont, producing raw honey. It was one of his value-added projects – mead and honey wine – that led him down a path to distilled spirits, ending in growing grain for whiskey.

“I think it’s in my genes to grow grains and make whiskey,” said Hardie, whose family started distilling in Scotland at least 130 years ago. “You have to give value to the product. The value comes from making whiskey. You can’t do a small farm, especially organic, without that type of value.”

Hardie said that his region is also blessed with some great bakers, who appreciate local craft grains in their bread. About two-thirds of Thornhill’s rye is stone-milled onsite and goes to bakeries and retailers for flour while the other third is set aside for Caledonia Spirits Smoked Whiskey, which has been barrel-aging for 3.5 years. Hardie expected it to be released before the year’s end, but noted that the distillery has shut down most of its production to make hand sanitizer.

Initially growing rye and barley, the two grains needed to make whiskey, Hardie has pared down to just rye to simplify his operation. He now encourages and supports other local farmers to grow the barley needed for Caledonia Spirits, the distillery he started around 1990. He sold the distillery, which also produces vodka and gin, 4.5 years ago to focus on growing grain.

He grows A.C. Hazlet rye on 82 acres. He is happy with the variety’s performance, he said, but will trial a few acres of Danko rye this autumn to see if it performs better.

Hardie plants his rye by Sept. 20, along with low-growing legumes (two white clover varieties) for a cover crop. His goal is to have the rye at about four inches by the time it gets cold in early October. He harvests around the second week of August.

Thornhill doesn’t have any pests to worry about, but vetch is a huge issue, Hardie said. To curb weed growth and maintain good soil health, he grows the rye crop for two years, then a cover crop that gets tilled under. Last year he grew oats and buckwheat to focus on soil amendments. “We don’t have another cash crop like soy beans,” he said. “We don’t have the equipment and there’s no market for it.”

Growing grain organically is important to Hardie and part of what keeps him interested in farming. “I have a commitment to be organic – it’s really important to me that we take care of the earth and feed her in an organic way,” he said, adding he thinks it makes the bread and whiskey taste better.

All of Thornhill’s rye and the grain from other farms that go into making Caledonia Whiskey are malted by nearby Peterson Quality Malt then sent back to Thornhill to be smoked with apple and cherry wood to produce a lightly smoked whiskey.

“Again, it’s all about building value,” Hardie said. “A smoked whiskey is different from a lot of others.”

He also grows elderberries, this year increasing from four to six acres. He added elderberries to his farm 20 years ago as another way to add value to his raw honey by making it into an elderberry cough syrup. He still makes elderberry syrup for his own use and shares cuttings and recipes for anyone else interested in learning, but most of the seven cultivars he now grows go to regional herbalists. A portion goes to the University of Vermont, which is studying the plant’s nutritional value. In the past he has sold the berries to breweries and a honey winery.

The farm has also taken timber from the property as part of its revenue stream for the past two winters. This winter, Hardie said, the hard and soft wood being pulled will go to building a duplex for farm workers, since there is a shortage of housing for them in the region.

Visitors can camp on the farm through the website Hipcamp (like Airbnb for campers). Hardie, who gives guests tours of the farm, said that it adds a modest income, but a more important value is for people to come to the farm to learn about farming. “Many have never been on a farm – all have never been on a grain farm,” he said, adding he is happy to take the extra time to help people have a better understanding of the food they eat.