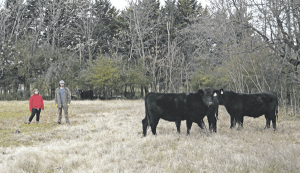 Daniel Scotton grew up on his family’s cattle farm in North Carolina, but he didn’t necessarily envision himself returning to the farm. But as he finishes his degree in sustainable agriculture at the University of Kentucky, Daniel is planning a future raising cattle on Clear Springs Farm in Julian, NC. With a minor in horticulture and after working on the university’s three-acre organic farm, where he met his partner Gwen Beirne, Daniel has a new perspective on agriculture.

“My family has been in the cattle business for four generations, counting me,” said Daniel. “Like many people raised on a farm, I always wanted to live on a farm, but I knew the reality of farming.”

Daniel explained that his grandfather grew up raising tobacco but didn’t enjoy it. “By the time he was in his early teens, he was going to livestock sales and stockyards,” said Daniel. “He bought cattle, and was able to buy some land through trading cattle.”

After being away from the farm for several years, Daniel realized how much he missed it. “In my last year, working for the organic horticulture unit, I felt like I was home,” he said. “I was ready to come back and give it a shot.” Daniel is well aware that many operations have labor problems and struggle to make a profit, but he has ideas that should make a difference.

His plan includes raising grass-finished beef in a rotational grazing system. The family started to switch to rotational grazing when Daniel was in high school, but Daniel said it didn’t go as planned, partly due to invasive species. “It was mostly multiflora rose and privet,” he said. “It was a headache to manage that amount of square footage in long rows. Now we have two rows in the middle, and we can bush hog and put up temporary fence where we need it.”

Daniel is in the process of establishing paddocks of about one acre each, and will determine stocking rate based on pasture growth and the number of animals being finished. He plans to move cattle once or twice a day, depending on pasture growth. He added that while the area doesn’t receive much snow in winter, it rains a lot.

The cow herd is primarily Angus, some the result of crossing with Red Devon, a breed known for finishing well on grass. “Red Devons are incredible moms,” said Daniel. “We also have some black baldies that are the result of Hereford x Angus crosses years ago.”

Since cows don’t require as much monitoring as young stock, Daniel currently keeps two brood herds of 25 cows each on nearby farms. Each farm has handling facilities that enable Daniel to handle the cows slowly and gently. He starts handling cattle at a young age to accustom them to the facilities and ensure smooth, easy handling in the future.

Although Daniel may use A.I. in the future, it’s more cost-effective for him to use a bull in his current set-up. When selecting bulls from among those tested at North Carolina State University, Daniel looks for a variety of traits including temperament and the propensity for genetically transmitted diseases.

“We’ve considered calving at different times of the year to maintain consistent production year-round,” said Daniel. “At one property, we keep the bull in year- round. The only problem is timing vaccinations. At the other property, we’re aiming for fall calving, and that has been consistent.”

Calves are weaned at an average of 500 pounds, and since cattle are already accustomed to grass, there’s no drop in condition at weaning. Right now, Daniel is finishing both steers and heifers. At weaning, he decides which heifers to retain and which animals will require some grain at the end of finishing.

Although that planting is now doing well, Daniel said establishment was difficult. “It was either dry or rainy and the ground went from hard, rocky clay to soggy ground that would sink the tractor,” said Daniel. “As soon as we had time between rainfalls, we planted.” Despite having a drill, Daniel said it was difficult achieving the correct planting depth. To ensure a good stand, he planted extra rye, especially at the ends of the pasture.

When Daniel’s parents and grandparents were raising cattle, beef was sold by the half, quarter or eighth. Over the past year, they’ve switched to selling primarily by cuts, which have a higher per pound value. Finished animals are sent to a processor about one hour from the farm, and Daniel always hauls at least two animals at a time to reduce stress.

To monitor the success of his program, Daniel weighs cattle at the time of loading, then compares that weight to hanging weight. “The processor is doing a great job getting a high percentage of meat back to us,” he said. “We’d like to be certified Choice, and our processor assures us we are that quality.” Although there’s a USDA-inspected processor in the area, there’s an eight-month wait. Daniel said that’s a little intimidating because cattle might not be ready on time after a drought or a wet winter.

Daniel hopes to begin selling beef at the Piedmont Farmers Market this year, and plans to draw people to his products with flowers. “It’s kind of hard to sell beef at a market,” he said. “It isn’t ‘beautiful.’ I want an eye-grabbing stand that will entice people to walk over and start a conversation with me about what we do.” Daniel and Gwen plan to establish flowers near a pond, which will supply irrigation water.

Daniel said North Carolina Cooperative Extension has provided him with good information about raising beef cattle, and now that he’s finishing cattle on grass, his focus will be on forage management. In the future, he’s hoping to eventually increase his herd and finish more cattle.

“I wanted to see if I could do it,” said Daniel, reflecting on his choice to return to his family’s farm. “I’m lucky my family has worked so hard – not everyone has that.”