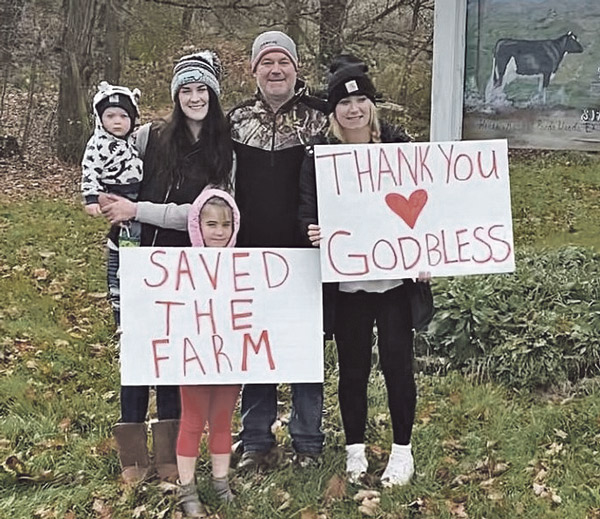 HUBBARDSVILLE, NY – A family farm goes up for auction, a heroine emerges, conflict ensues, 10,000 friends come to her aid, and together they save the farm from the auctioneer’s gavel. One might guess this dramatic plot is the makings of a Hallmark movie. For Nicole Head, Madison County’s Dairy Princess in 2010, this true story was an act of defiance, desperation and resilience. Nicole’s grandmother, Diane said, “It was an act of love.”

Headline Farm’s Holstein pedigree and original 60-acre farm has been in the family since 1904 when the Mason Road collection of dairy families used to be called “Dairy Street.” Dewitt C. Head, his son Lynn, grandson Clyde and great-grandson Dewitt Jr. added to the land and farming setup over the years, encompassing over 900 acres. In 2000, Dewitt Jr. retired and sold the farm to his son, Tim and his wife and children.

Dairy farming in stressful times took its toll on the family unit and ended with divorce proceedings four years ago. In the latter part of September 2020, as the parties were unable to reach a settlement, the judge ordered the sale of the farm on Nov. 5 to reach a settlement payoff. The family had already sold the cows and most of the equipment to satisfy the negotiations but it wasn’t enough.

“We tried every way to get the money needed without losing the farm,” said Dewitt. “I couldn’t imagine walking out my back door and being on someone else’s land. It is a bad, bad situation to live through.”

For daughter and granddaughter Nicole, it got personal. “After the auction signs went up, it hit me like a freight train, that all of my father and grandfather’s hard work and dedication was going to be taken away from them — from us. This is more than just a farm. This is our home,” she said. As the sun was setting on their land, Nicole found herself having a conversation with her God and seeking advice. “I can’t explain what happened amidst my tears, but I took out my phone and made a video for myself, for closure, and shared it on my TikTok account.”

Two of Nicole’s 3,000 TikTok followers immediately suggested she start a GoFundMe fundraising campaign to save the farm. “I took their advice reluctantly but figured ‘What have I got to lose?’” she said. “We were on the brink of losing the farm in 30 days. I kept my plans a secret from everyone, knowing my family might not approve of such charity. What pushed me the hardest was the admiration for my grandfather and dad.”

Her plea on GoFundMe was “If 250,000 people could spare one dollar each” she could save the farm from going to auction on the open market. The former dairy advocate set up accounts on PayPal, Venmo, CashApp and the GoFundMe page and used her communication skills on TikTok, Instagram, Facebook and the hashtag #SaveTheFarm to generate interest in her cause. With her catchy videos, support started to roll in at a rapid clip.

Thousands of dollars were donated by Oct. 14 and Nicole’s TikTok account added over 10,000 new followers. The campaign was bolstered with a story shared by a local radio station. By Oct. 20, the balance was over $36,000. Things got interesting when “Teen Mom” reality TV star Jenelle Evans shared a screenshot of the GoFundMe with her 2.9 million followers, calling for TikTok people to “do their thing” — “Every share, every penny and every thought counts” for Nicole. By milking time, the fund had reached over $91,000.

However, no good deed goes unpunished. During the campaign there was a counter-culture brewing on TikTok, with a female truck driver identifying as @Zyereri starting a GoFundMe campaign with the hashtag “#TakeTheFarm.” The plan was to buy Headline Farm at auction and turn it into a commune and “weed farm.” The polarization of political ideologies was on full display as liberals and conservatives battled online in the comments section.

In a dramatic twist, the feud actually pushed Nicole’s balance over the $155,000 mark, even though the #TakeTheFarm campaign earned over $104,000 by Halloween (when it ceased). The drama was watched by over 17 million TikTok viewers. “I’m sad this happened. It had nothing to do with politics. I’m just a woman trying to save her family farm,” said Head.

Nicole ended the campaign before the goal was reached, as the lawyers agreed to a settlement. The auction was cancelled Nov. 1 – the same day as Dewitt and Diane Head’s 56th wedding anniversary. “What a present,” said Diane. “I didn’t realize there was so much love in the world. We are blown away from the generosity.”

Nicole’s dad Tim choked back tears as he thanked everyone who helped saved the family farm. “I am the fifth generation to run this farm. Nicole will be the sixth. I just want to thank everyone for their donations, the love and the support to go on for generations to come. Thank you so much.”

Another treat was Texas musician Jeff Martin composing an original song for the Head family titled “We Saved the Farm” (which you can find on YouTube).

In the final analysis, over 10,000 people helped Nicole raise $156,000 to save the farm from the auction block. Her social media influence has grown to over 98,000 followers, which may position her well for agriculture advocacy opportunities. She is also sharing other farmers’ plights to save their farms in hopes of a positive outcome. Her advice to others: “Share your story. Put yourself out there. Don’t be afraid of judgment. Keep your nose to the grindstone. And invest in people — they are more than willing to help.”

With the pressure off, the family is preparing to take a comprehensive look at diverse, profitable opportunities the farm can provide. “We owe Nicole a great amount of thanks, love and respect for her passion and perseverance,” said Dewitt. “She is an incredible young woman and mom with a bright future.”

“With all of your help, a small town girl with a dream was able to save her family’s farm and home. I am forever thankful for each and every one of you. The outpouring of love my family has received through all of this truly restores my faith in our world. God bless you and thank you from the bottom of my soul,” Nicole said.