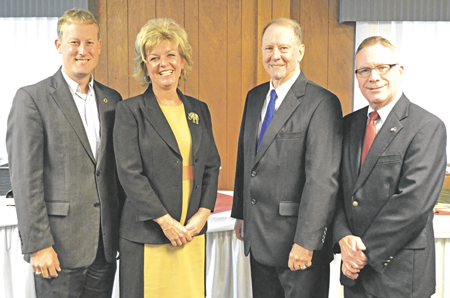 by Stephen Wagner
It had been a few years shy of a decade since I had last seen and chatted with my old boss, Secretary of Agriculture Sam Hayes (R-PA). State Representative Mindy Fee holds a “farmers’ breakfast” twice a year, an occasion for her constituents to hear the state of Commonwealth and federal affairs by public officials who are in a position to know what’s going on. It’s also under the auspices of Penn-Ag Industries, of which Chris Herr is executive secretary. Herr was one of Hayes’ deputy ag secretaries. I had been one of a series of press secretaries in Hayes’ term as AgSec.
Had I introduced him, I would have said, “The halls of PDA still echo with Sam Hayes stories. That is because he was usually the first one in the building in the morning and often the last one to leave in the late afternoon. He got more done in any given period of time than many of his predecessors. Talk about a work-a-holic. After 9/11, when Pennsylvania Governor Tom Ridge was tapped by President George W. Bush to head up and develop the newly minted Department of Homeland Security, Hayes got a phone call from Mark Schweiker, Ridge’s lieutenant governor, who was then governor for Ridge’s final year. Schweiker was looking for someone to be secretary of another state agency, the Department of Legislative Affairs (LA). The final years of most administrations can prove to be much more relaxed and yet somewhat more chaotic than the previous years. Schweiker wondered if Hayes would be willing to leave Ag and assume leadership of LA. Hayes explained that he could do it, since he had a good executive team in place to run Ag for that final year. Schweiker felt that Hayes was his man because of his many years in the State House, some as Minority Whip. But Hayes said, ‘Let me think about it overnight.’ Whatever entered his thinking, he decided to take Schweiker up on his offer, but to also remain Secretary of Agriculture, running two agencies simultaneously.”
“One of the constitutional duties and rules of the legislative branch [of government],” Hayes said, “is legislative oversight, especially in the realm of rules and regulations which are so bad that you can almost choke on them.” State senators and representatives have to make sure that the intent of the legislature as regards the budget is carried out. “The same with laws passed,” Hayes stressed. “The executive branch should not pass or adopt any rules or regulations that are outside the bounds of the law passed by our branch, the legislative branch.” Hayes made clear that the mother of the three branches is the legislative.
Turning to the dairy industry, Hayes zeroed in on trade. “We are a bountiful commonwealth, and we are a bountiful nation – so bountiful that we cannot consume all of these foodstuffs ourselves in 2018,” he said. “To stay agriculturally viable, we have to look around and about for other markets – not only domestic markets but international markets as well. Mexico is only 40 percent self-sufficient in dairy. Mexico is a major market for powdered milk. If we are not careful, geo-politically, to nurture these markets, Mexico could look elsewhere, like to New Zealand. Powdered milk travels easily and inexpensively. Mexico has been an economic friend, and we should protect that market for our dairy industry.”
The powdered milk notion has definitely taken root. “The USMCA would allow U.S. dairy farmers more access to the Canadian market, particularly with milk powder,” Dave Gallagher wrote in the Bellingham [Washington] Herald. “Skim milk powder is one of the products produced at the Darigold facility in Lynden, much of which is shipped to Asia . . . Darigold President and CEO Stan Ryan issued a statement saying the company was grateful that the U.S. was looking out for the American dairy industry with this latest agreement. ‘Dairy trade with Canada was one of the most difficult and contentious negotiating issues to solve in the entire USMCA deal,’ Ryan said in the statement.”
Politico also chimed in about powdered milk: “Maybe more significant were Canadian concessions that will eliminate a milk ingredient pricing policy that gave incentives to domestic cheese producers to use a surplus of Canadian milk protein concentrates and skim milk powder that resulted from increased butter production. The pricing policy affected U.S. exports of so-called ultra-filtered milk – a new product that wasn’t subject to tariffs under the old NAFTA. Those exports had been a major source of income for farmers and processors in Wisconsin and New York already suffering from a glut in dairy.”
“Dairy farmers are hopeful that the new U.S. trade deal with Mexico and Canada may help alleviate some of the pain they’ve experienced the last few years as the price of milk has cratered, threatening their livelihoods” – so says CBS News. “The overhaul of NAFTA, now dubbed USMCA for the U.S.-Mexico-Canada Agreement, aims to end discriminatory pricing and limit Canadian policies regarding its dairy powder exports. U.S. dairy farmers claim those policies have unfairly restricted their ability to compete and allowed Canada to flood world markets with its own versions. Milk powder is popular in countries with poor transportation infrastructure and refrigeration, as it can provide a milk substitute that doesn’t need to be refrigerated. It is also used in food products like pastries and chocolate.”
“Have any of you heard of BRICS?” Hayes asked. BRICS is an acronym for Brazil, Russia, India, China and South Africa. “That economic trade consortium was put together by Russia and China. They brought in Brazil to make entry into the western hemisphere. We have to protect our western hemisphere and our markets. It’s important for agriculture and it’s important for America. I’m not here to lay out a public policy schematic that will do all of that, but you and I have to be geo-politically savvy. A nation that cannot feed itself is a nation at risk!”