For the love of farming, making cheese and raising champions 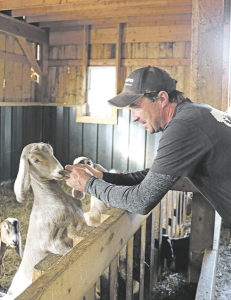 As though plunked into the middle of a cornfield like Dorothy was in “The Wizard of Oz,” Thomas Farm sits in the center of the suburban homes of Sunderland, MA. It is a perfect setting for the busy farm stand where Jim Thomas and Laurie Cuevas sell their produce, plants, prize-winning cow and goat cheeses, raw milk and eggs from 400 free range hens.

Thomas built the farm’s 108-foot-long barn in 2011 while he was working construction with Karl’s Excavating in Hadley, MA. Although not born on a farm, he had milked cows for about 15 years prior to his construction career. He gravitated toward goats, as they made the most sense for his limited acreage. Leaving construction to farm full-time in 2015, he added a milkroom, designed and welded a goat milking parlor and built an FDA-regulation cheese room.

Cuevas grew up on her family’s dairy farm in Cheshire, MA. Her family lost their farm in the late 1980s and Cuevas pursued a career in global marketing for 20 years. Never able to shake the desire to be a farmer, she started a 4-H dairy club, nurturing and coaching many youth to state and national recognition. She left the corporate world in 2014 to answer her heart’s call, raising Brown Swiss and opening a local store. The two met shortly thereafter, realized they shared the same passions and soon started farming together.

“It is incredibly gratifying to work with someone you never get tired of being around,” said Cuevas. “We work really hard every day, but we never take each other or being physically able to do what we love for granted.”

Their farm’s 90 registered Nubian goats each have names, such as Dolly, Misty, Bailey, Sally and Jellybean. The goats are seasonal milkers, typically milked twice daily from March to December. Each goat produces about six pounds of milk daily. They begin kidding season in March.

“This year we had 112 babies in less than two months. It was complete mayhem,” said Cuevas.

All the babies were bottle fed using milk from their five milk cows, three times a day. At one point they calculated they were feeding over 1,100 bottles a week. Bottle feeding keeps close tabs on the kids’ health and well-being, with the benefit of them growing up acclimated and affectionate toward people. Not only did they know Thomas and Cuevas, but others flocked to the farm to see the baby goats and help bottle feed them.

While most were sold, they kept 15 replacement kids in another pen, sporting names like Betty White, Joan Jett and Pinky. The young goats can have kids and often become part of the milking herd just after they are a year old. “The goats are so cool and very clean. The young goats learn the milking routine quickly. They are really smart,” said Cuevas.

The goat milking parlor is pristine because unlike cows, goats never urinate or defecate while being milked. “I put my coffee down on the stand behind the goats when I’m milking without a second thought,” she said. “I would never do that with cows!”

The goats are tested once monthly through Vermont DHIA. Their milk records help determine which offspring to keep, and aid in detecting potential health problems.

Cheese has been made on Thomas Farm for about five years, almost daily. First the milk is pasteurized. Each batch is then crafted using the specific cultures and methods needed to produce each individual type of cheese. Learning through trial and error, the couple slowly developed their cheeses to suit an eager following of local restaurants and markets, including a variety of Farmstead cheeses: cheddar curds, wheels of cheddar, Gouda-style cheese from their cows’ milk and chevre and Gouda-style cheese from the goats’ milk. 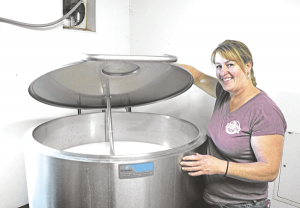 Cuevas and Thomas both love cows. Taking a rare vacation to the World Dairy Expo in Madison, WI, a few years back, they saw cheese curds for sale and decided to try making them. Their resulting Thomas Farm Cheese Curds, made from cow’s milk, won a gold medal at the 2019 New England Cheese Competition at Eastern States Exposition this past September, where they have won nine medals over the past few years with both cow and goat cheeses. Their goat chevre won second place for the second year running at the National American Dairy Goat Convention National Goat Cheese contest, held in Boise, ID this year.

The goats are voracious eaters, consuming more than 10 bales of hay daily. Contrary to popular myth, goats can be very picky eaters and need excellent quality feed to maintain good health and milk production. While Thomas Farm has 25 acres, it is not enough to produce the thousands of bales of hay they need. “This is prime land. Everybody wants it,” said Thomas, but in big pieces, not small sections. “We cut hay on a lot of smaller fields.” Between vegetables and hay, they rent an additional 50 acres of land.

“The soil is just amazing here in the Pioneer Valley,” said Cuevas, perfect for growing vegetables and plants for their farm stand. Thomas built a wooden root washing machine to clean their carrots. They start flowers and vegetables in their greenhouses.

Like all farmers, they work long hours, but they have fun too. Visitors are greeted by a covered silage pile with a 10-foot-high “MILK” spelled out in tires anchoring the plastic cover.

Cuevas is an ace at taking pictures to share on social media. When a kid was born last year with a heart shape on her back, Cuevas documented this amazing occurrence. (The kid’s mother’s name was Sweetheart.) Her photo of baby Charlotte ended up gracing the February page of the MDAR calendar. She also posted a video, “Flying Baby Goats,” that captured the Nubians’ trademark long ears flapping up and down as they ran into the barn from the pasture as though each were Sister Bertrille from “The Flying Nun.”

What Thomas and Cuevas share that some farmers find hard to maintain is fantastic people skills. When a customer stopped to buy eggs at their farm stand, he recalled having a conversation with Cuevas during a local event where she was giving out samples of cheese. “The two of us do all the work on the farm. That often surprises the visitors that frequent Thomas Farm. We welcome a lot of students and various groups here. We deeply believe in nurturing a love and awareness of agriculture,” Cuevas said. “We recently hosted a class from the UMass sustainable soils program; we’ve had students from Amherst College, Becker College and Vermont Tech in the past year as well. The kids and teachers from the elementary school walk here from their school for field trips.”

For more information, visit www.ThomasFarmstand.com or Thomas Farm and Dairy on Facebook.