For all the cheese in Dudley 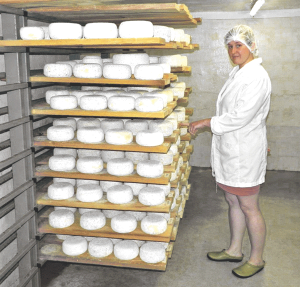 For many of us, exposure to events in our childhoods have profound effects on the career paths we take as adults. For Marie-Laure Couet of Dudley, MA, it was a visit to a cheese facility in the Alps that set her on her path. At 8, her parents embarked on a tour of France that included hiking through the French Alps. On one of these excursions they found their way to a modest Alpine cottage where the occupants made goat milk cheese. This visit made a lasting impression on young Marie, one that stayed with her through her adolescence when her career goals began to take shape. She felt compelled to manufacture cheese.

One of her early experiences was on a farm where goats were milked, and she learned some of the idiosyncrasies of the species. This exposure helped shape her decision-making skills as she worked her way toward fine-tuning exactly what sort of operation she wanted to develop. One of the unique aspects of her learning curve was the apprentice program she entered once she knew cheese making was to be her career. She elected to spend two years in Europe studying and learning in Spain, Germany and France. There was no monetary compensation for the labor she provided at each of the facilities. There was no formal program available in Europe that catered to the needs of young people interested in cheese production so it fell upon Marie to do the necessary leg work to find the facilities that would accept her and allow her to gain experience in the art and science of cheese production. For many the language barrier alone would have been enough to discourage such an undertaking, but Marie was fluent in French (with a dad who is French-Canadian and a mom who is French). She suggested her Spanish is passable and she “gets by” in Italian.

It was after a considerable search in 2012 that Marie and her partner found a property in Dudley that met most of their anticipated needs for developing a cheese business – and enough land to accommodate a goat herd if ever the time should come when that would be viable. There was a classic New England farmhouse and a neglected barn in need of extensive remodeling. It was not until 2015 that the facility was approved for the production of its intended product. The room in which the milk is processed is now state of the art, as is the storage/curing room where product is held until it is deemed ready for sale. As a commercial food processing plant it is subject to several regulatory agencies that oversee such activities at the local, state and federal levels.

Each of the varieties of cheese produced has a somewhat different recipe so careful record keeping is a must. The daily production is recorded in a master log and necessary information travels with the product through its life in the curing room. 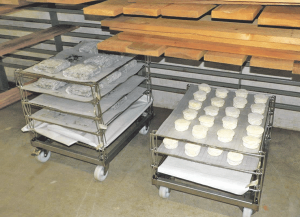 The naming the numerous varieties produced is something of a game. At this point in time Marie has chosen to name the many different varieties after her great-grandmothers. What she plans to do when that list is exhausted is a decision that will have to be made at the highest level of management.

At this time the cow’s milk used in production is obtained from two local dairies. The quantity of milk used in any one production cycle is small – too small to justify hiring a full-sized tanker to do the hauling. Marie purchased a small milk tank which she mounted on a small trailer. She hauls purchased milk from the farm to her plant. On the other hand, the sheep milk used in her production is purchased from a sheep dairy in Fultonville, NY. Here, the cost of delivery is about $12/gallon, which makes it a somewhat pricey commodity.

On-site sales are conducted in a small room as one enters the barn. All sales are done using the honor system. The majority of sales are conducted using rented space at farmers markets in Massachusetts and Rhode Island. One of the better outlets to date has been the Pawtucket Wintertime Farmers Market in Pawtucket, RI. This market runs Nov. 3 – April 27, a time when most farmers markets are idle. This time period is a particularly good one for the sale of gourmet cheeses. Other Massachusetts markets served from spring through autumn include Wayland, Westborough and Worcester. At this time there has been an entry into the retail market, with Whole Foods offering select cheeses from Couet Farm and Fromangerie at their markets.

Marie’s story is an example of what an individual can do if she is allowed to pursue a dream and carry it to fruition.