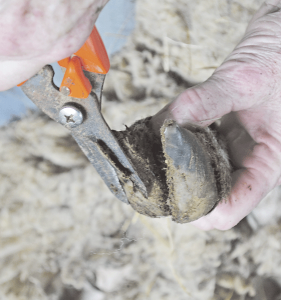 The economic loss that occurs when a herd of sheep or goats (both are susceptible to the same strains of foot rot) is infected is substantial, and the disease is difficult to fully eradicate once introduced. There is no such thing as a herd that has just a bit of foot rot: either the causative organism is in the herd, or it isn’t.

The causative organism is Dichelobacter nodosus. The organism can exist asymptomatically in a herd, biding its time until the necessary environmental conditions are met. Until then, foot rot does not occur. This foot rot pathogen is anaerobic and can exist in the environment for about two weeks, although it can live in the hoof for extended periods – perhaps longer than 30 days.

“The most common way to get it is to buy it,” Neary said of the causative foot rot agent.

Quarantine of animals new to the operation, of those who have been off farm to fairs and shows, and of any animal showing signs of foot rot should be routinely practiced biosecurity measures. Aggressive quarantine of these animals would involve foot soaks, some moderate hoof trimming and the introduction of mud and moisture in an attempt to activate any dormant D. nodosus before introducing these animals back into the flock.

The necessary environmental conditions for foot rot to flourish include warmth and moisture; mud and manure; and both the Fusobacterium necrophorum and D. nodosus bacterium. Without the presence of both bacteria, foot rot infection does not occur.

Fusobacterium is a normal inhabitant of pastures and barnyards, as it lives in the intestinal tract of the sheep and is excreted. On its own, it is not harmful. But combined with D. nodosus, which has to be introduced into the sheep’s environment, foot rot infections occur. Untrimmed, neglected hooves add to the problem.

Minor hoof infections, known as scald, can be caused by F. necrophorum alone. This is not foot rot, and occurs only under wet conditions. Scald, characterized by red tissue, hair loss, moist hoofs with slightly elevated temperatures and some smell, does not progress to foot rot on its own.

“If nodosus bacteria is not present in that operation, they will not get foot rot,” Neary said, even if the moist, muddy environmental conditions and F. necrophorum are all present.

But add some D. nodosus into the environment, and virulent foot rot occurs. The development of dark tissue in the affected hoof indicates the presence of D. nodosus, and of foot rot infection. Because different strains of the D. nodosus bacteria are more severe than others, foot rot symptoms can range from mild to extreme.

Foot rot causes the connective tissues of the hoof horn to be digested by an enzyme which is secreted by the D. nodosus bacteria. As the keratin is digested, an offensive odor is released.

The best way to treat foot rot is to prevent it. If it is introduced to a herd, aggressive steps are needed to eliminate the pathogen. A vaccination for foot rot was highly successful at preventing infection, but is no longer available in the United States (although it is still marketed in other countries).

Zactran, an antibiotic used in humans and to treat cattle respiratory infections, is extremely effective against foot rot. It must be prescribed by a veterinarian and supplies are limited. Concerns about resistance are highly relevant, and judicious use of the medication, when available, is warranted. The herd should be culled aggressively and whole herd treatment should occur when animal numbers are at their lowest, both for increased effectiveness in combating the disease, and decreased expense.

An effective way of eliminating foot rot is to fully depopulate the herd, and restock with clean animals after a three-week period, in order to eliminate the pathogen from the environment. This is not do-able for many producers, but it is effective, Neary said.

In conjunction with antibiotic use, or if the antibiotic is not used, other measures need to be taken to eradicate foot rot. The goal is to eliminate this aggressive disease and not allow it to linger in the herd. Animals with active foot rot infections should be quarantined away from non-infected individuals as foot rot is highly contagious.

It was previously thought that aggressive hoof cleaning to rid the hoof of foot rot was needed. That is no longer recommended. Instead, it is believed that aggressive trimming can spread the disease and cause hoof damage. Outside of normal trimming to keep the hoof healthy and clear of excess growth, no additional trimming is needed for foot rot. It is recommended that trimming occur one week after antibiotic use in order to keep the hoof clean. Equipment should be disinfected between animals as a precaution against spreading any remaining bacteria.

A foot bath – better yet, a 10-minute foot soak – with a drying agent, mixed with soap to keep it in suspension is needed for all animals in the herd. Zinc sulfate is recommended, and copper sulfate is effective as well. Formaldehyde could be used, but has negative drawbacks including hoof hardening, which make it less desirable and effective. Foot baths work best in cases of scald, or early stages of foot rot, but they can’t penetrate deep enough into the hoof to eradicate severe disease.

“They certainly are a useful aid to try to control and/or eradicate foot rot,” Neary said of foot baths. “By themselves, it’s hard to eradicate [foot rot]. I think they’re still valuable.”

Foot soaks should be repeated two or three times per week and the animals moved to a dry area after treatment. Healthy animals should be kept in areas where no sheep or goats have been located for a minimum of 14 days prior, in order to prevent environmental infections from occurring. If any of the “clean” group of animals shows signs of foot rot, immediate removal of them to the quarantined pen is warranted.

Once any infected animal shows no further signs of foot rot, it should be removed from the infected pen and moved to a third area, quarantined from healthy animals. This area, too, should be sheep-free for at least 14 days prior to use. The animals should remain in this area for at least 14 days. Re-inspect them and re-treat as needed before they rejoin the healthy herd. Re-inspect healthy animals regularly, to catch any previously overlooked foot rot in its earliest stages.

Susceptibility depends upon genetics of the individual animal as well as breed genetics. Foot rot heritability is estimated between 0.1 – 0.3, depending on breed. Merino-derived sheep breeds are highly susceptible to foot rot.

Keeping records of treatment and results for each animal will help to select for animals which show more natural resistance to foot rot.

“Do everything you can not to introduce D. nodosus bacteria back into the flock,” Neary said. “Prevention is by far the best strategy. It’s a disease that’s entirely preventable.”