Focusing on the ‘forgotten farms’ 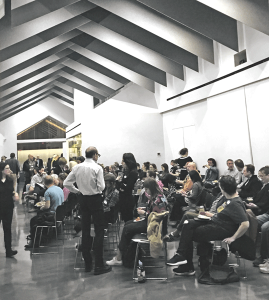 Discussions about class and class divisions are familiar fodder for debate during election years. The issue of class division amongst farmers, however, is a much less discussed development. A film premiere was recently held in New York City to highlight this issue.

Gardner, a professor of environmental planning at Williams College in Williamstown, MA, set out to make a film addressing the lack of awareness of these farms.

Gardner explained, “I found that when dealing with educated, liberal elites, like the students at Williams, there was a real gap in their knowledge of farmers and farming.” A frequent assignment in Gardner’s class is for students to interview a farmer. “I was seeing that every student was talking to a small scale farmer at the Williamstown Farmers Market. And while there’s nothing wrong with that, I learned that many people had in their minds a two-tiered concept of farming. On the one hand, there were these small boutique farmers, people making less than $10,000 a year on their produce, who were seen as the good guys, and large-scale industrial farms, the ‘big bad agriculture’ entities, that were seen as the bad guys. There was no knowledge of the commercial family dairies stuck in the middle of all that. These farmers are the backbone of New England agriculture. There are three family dairies right here in town. Not one of my students interviewed any of them.”

Gardner sees the new food movement, with its emphasis on the organic horticultural hobbyist, as largely responsible for the erasing of these family farms from the public consciousness. “Forgotten Farms” is her effort to remedy that. Working with her partner, director David Simonds, Gardner wanted to dispel what she sees as “naïve views about farming.” She pointed out, “It’s not just my students. A lot of people think that all commercial farming is wrong and harmful. They don’t realize what these farms do for our community. They don’t realize that these farms grow in size because the families that run them grow. When these families expand, the farm’s herd has to grow to support them… I talked to one concerned student who said that larger farms were bad for the environment. She compared it to deforesting the Amazon jungle. This film shows that a farm can be big and treat its animals humanely, a farm can be big and be environmentally responsible. We have to make people understand that family farms are not the enemy.”

The Center for Agricultural Development & Entrepreneurship (CADE) arranged for the documentary’s New York City premiere. Shown on March 9 to a sold out crowd at Project Farmhouse in Greenwich Village, the film strives to relate an honest and unbiased account to its viewers. “We don’t romanticize family farmers,” said Gardner, “nor do we bash boutique farmers. We just want people to know who these people are and what they do.”

“This isn’t a ‘Go out and buy a gallon of milk now!’ movie,” said CADE Senior Program Manager Lauren Melodia. “It’s just an honest attempt to make people aware. The majority of farms in the Northeastern United States are managed by dairy farmers, but most people don’t know that because they don’t see them. They aren’t in the farmers markets because they sell their products through cooperatives. They can’t leav 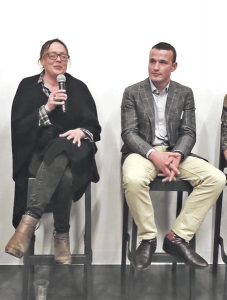 e their property as much as a lot of these other farmers because they have to milk their cows twice a day. They’re invisible.”

Since its completion in 2016, the film has had over 130 showings, from Canada to Congress. New York City provided a unique opportunity. “It’s such an influential population center,” Melodia said. “It’s a great opportunity to get this message out there.”

That message is appreciated by its subjects. “Creative people, the filmmakers, can tell our story better than we can,” said Lorraine Lewandrowski, owner of Honeydale Farm in Herkimer, NY. “The premiere had such a wide variety of people there, and they all learned what it’s like for us.”

According to Gardner, “Our hope is that there will be more and more showings, and it will mobilize activists and officials to appreciate and protect these farmers.”

And it’s already started. “That student who thought big farmers were like Amazon deforesters? After seeing the film, she said ‘We have to help these farmers!” She’s arranging for the film to be shown at NYU.”

Any readers who might want to host a screening of “Forgotten Farms” are encouraged to contact Gardner at www.forgottenfarms.org.