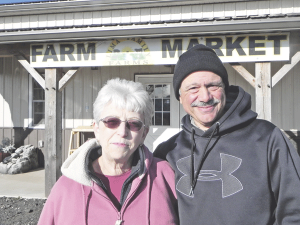 HILLSBOROUGH TOWNSHIP, NJ – At last winter’s meeting of the New Jersey chapter of the Northeast Organic Farmers’ Association, Philadelphia-raised civil engineer-turned-cattle farmer John Lima revealed that the only experience he had raising livestock was keeping a few goldfish. He earned his master’s in civil engineering from Drexel University in 1977.

It was more than enlightened self-interest that led John, 68, and his wife Kathy to their second careers as cattle farmers. Because he specializes in building and restoring earthen dams and Kathy’s elders had health issues, he adopted organic, sustainable and regenerative practices on his 306-acre farm. Lima and his crew at Lima Family Farms grow their own vegetables, but the main business is raising grass-fed, pasture-raised beef cattle. Like a lot of second career farmers, John and Kathy were motivated by wanting to raise their own good, clean, chemical- and hormone-free food.

“My wife’s family has a history of Alzheimer’s and dementia. We started doing research and found out a lot of that could be associated with diet. Back then, the food we were eating was strictly from the supermarket,” Lima explained. “Most nights now when we eat dinner, almost everything we eat is from our farm. I don’t want my wife to get dementia like her parents did,” he explained, arguing the cost of long-term care in assisted living facilities for his late in-laws far exceeded the cost to raise their own livestock and vegetables – or at least it did when he worked on a smaller scale.

Lima still works at his civil engineering firm in Warminster, PA, a few days a week but plans to spend more time on his farm. He bought 150 acres in Hillsborough in 2007 and then another 156 acres of contiguous land to allow more space for his cattle to graze. While he is not certified organic, he has been moving in that direction since he first purchased the farm and began raising food for his wife and the rest of his family.

Through the years, he needed lots of mulch for his earth dam construction projects. “When you strip soil [for dam construction projects], you have to put down mulch so you don’t get a lot of erosion,” he said, “and I couldn’t get enough mulch, so in 2002 I bought a 50-acre farm near Vineland [in southern New Jersey] and started growing winter rye and sorghum and sudangrass to make mulch.

“That went well, so I convinced my wife I needed more mulch, and we bought this farm … Then the earth dam construction market went south,” Lima said, recalling the Great Recession of 2009-14. “I started adjusting to the slowdown by growing some hay. In 2010 I was able to pick up 17 heifers. We started to breed them. Up until then, I had never owned any animals at all.”

Lima was quick to credit other friendly farmers in central New Jersey who offered advice and served as mentors, including George Rude at nearby Griggstown Farm; Dr. Joe Heckman, a soil scientist, raw milk advocate and organic enthusiast at Rutgers; and Virginian farmer Joel Salatin. He heard about Salatin through his daughter Kate, who lives in Washington, D.C.

“He’s a very big proponent of grass-fed everything,” Lima explained, “so my daughter and I went down there to look at his farm and how he did things. I bought some chickens, some hens and some broilers, and heifers, and we just took a little bit of this farm to raise them. The rest of this farm was used to grow straw and hay.”

Lima was open about all of his early successes and failures. In 2011, he opened his farm stand near Amwell Road, which can get busy with passing cars on weekends. He had no way to anticipate demand for eggs, chickens, turkeys, pork products and beef. They started by selling their excess near the front of their driveway. Gradually they moved the farm stand back toward their geothermal-heated house. Patrons of the farm market now utilize a parking lot and a separate, spacious building with a number of large refrigerators stocked with frozen and refrigerated farm-fresh meats.

“I had no idea there would be such a huge market of people who wanted farm-fresh food,” he acknowledged. “We quickly found out there was demand for egg layer chickens for soup. We sell these soup chickens and use that money to go buy new young chickens, so that way we have new chickens for eggs.”

Recently, Lima and his crew began processing their chickens on-site. They now process 75 broilers each week and sell frozen chickens from December through March. Working with other savvy farmers in the area, he quickly diversified his product lines to include smaller artisan food producers.

“Anything we sell here, we also eat,” Lima explained. “People are willing to pay more for good, farm-raised food products.”

All of his farm-raised pork is processed at Nello’s Specialty Meats in Nazareth, PA, about an hour away. “He is a real artisan-type processor,” Lima said. “You can open up our freezer case and you’ll find pork roll and about 15 varieties of sausage in there. We also have a person nearby who makes chicken pot pies for us, and they’re incredibly good. We have another person who makes beef broth and chicken broth from bones.”

Lima said he sells about four beef cattle each month now, “and we breed our own, so we know the genetics of what we’re getting. If you buy an animal, it might be more genetically inclined to prefer grain, and you’re trying to finish it with grass. Certain cows are made to gain five and six pounds a day on grain, so if you take that animal and put it on grass it really struggles because it wants so much more than I can give it. It doesn’t do as good a job for you. That’s why we raise our own, and they’re mainly Black Angus.”

His flocks of chickens are raised free-range in outdoor pastures, except in winter months when they’re moved to spacious greenhouses that provide access to the outdoors.

Candidly, Lima noted there’s not much infrastructure to support livestock farmers around the Garden State anymore. He has to go to Lancaster, PA, to get equipment and supplies much of the time, although he noted the Bell Meade Co-Op still remains nearby in Hillsborough.

“When we first started out, we put some signs out and put the farm stand out by the edge of the road. We kept moving it back and so eventually, we built a structure here,” he said. He and his crew made the conscious decision to make sure their livestock were visible – happily enjoying themselves out in the fields – from the driveway.

“The hardest thing was figuring out how many days a week we should we be open. If you’re paying somebody here to watch the store, you have all these costs. Next thing you know, you’re spending all this money on a slow day,” he said, “so we’re constantly trying to figure out where that sweet spot is.”

The farm uses hoop houses and greenhouses to grow their vegetables, but they also bring in vegetables from other smaller farmers in the area.

“We’re always looking for better ways to be doing stuff,” Lima said, adding he’s already created models of how to do chicken farming, egg selling and pig raising operations successfully on a small scale. Like many in the organic farming community, he truly believes in sharing the knowledge he’s picked up on his own and from other supportive area farmers, organic and conventional alike.

Lima has a good handle on Hillsborough’s diverse economic demographics. “I wanted to be selling for my community, for people who make a lot of money and for the people who make less money,” he explained after a tour of his pig, cattle and turkey pastures. “I want to be able to help people feed their kids with good food, so how do I keep the price down so that more people can enjoy this? I don’t want to raise the price – I’m trying to figure out ways to lower the price.

“Our goal is to feed our community,” Lima stated. “We’re not feeding the world here. We’re just feeding our community. If there are enough farmers around the world just feeding their communities, then everybody can enjoy better food. They’ll get sick less, there’s less Alzheimer’s and dementia and the costs for treating all that stuff comes way down.”