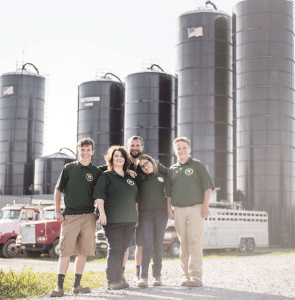 If you have ever taken a drive through Cayuga County, there is a good chance you have cruised past some fields that belong to the Patterson family. The Pattersons run a sixth generation large-scale dairy and crop farm in Auburn, NY. On top of the 1,600-cow milking herd and 1,200 replacement heifers, they grow about 2,500 acres of hay, corn and wheat. Julie Patterson said that their children Tad, Wyatt and Rylie have their own show cows as well, but “they don’t get treated very special around here and are just a part of the herd.” She noted the show cows “still have to pull their own weight, just like the rest.”

Her husband, Jon is the farm manager and Julie is in charge of bookkeeping, human resources, planning for the future of the farm and managing their social media. The kids have taken a strong interest in the farm over the past several years. The oldest, Tad will be attending SUNY Cobleskill this autumn for his sophomore year — majoring in agricultural business. When he’s home, he doesn’t hesitate to jump in on the action at the farm. Julie mentioned that Tad “loves to keep his eyes and ears on the reproductive management on the farm.” Wyatt helps out on the farm part-time when he is not in school; and her youngest, Rylie, just started working with calves this summer. Julie explained that her daughter loves working with the calves and is learning a lot — she’ll be entering ninth grade this year.

Although she loves having them on the farm, Julie said, “If they do decide to come back [to the farm], we’ve told all of the kids that they have to work someplace else first. It’s important to get experience and exposure elsewhere so they can bring good stuff back to the farm.” She wants them to go out and explore other things first.

While the Pattersons don’t have any plans in place to expand at the moment, they have been working very hard to create a more efficient farm. Julie explained that over the past few years they’ve seriously lowered their cull rate and increased their pregnancy rate. Instead of buying in cows, they decided to improve what they already had. When it came to getting their cull rates down, Julie mentioned they switched to sand bedding in two-thirds of their barn, which has helped a lot in substantially lowering mastitis cases. In the past, they’d used recycled manure on deep bedded stalls, which wasn’t benefiting them, so they made the switch. Julie said the recycled manure seemed to be more beneficial to those who use mattresses, but without the mats in their barns, it had a negative effect on herd health. They also improved their herd by implementing genomic testing so they weren’t breeding back unsuccessful animals.

This summer has been a busy one so far for the Patterson family. Despite the craziness going on in the world and the bipolar markets, they’ve gone ahead with many of the projects they had planned. Currently, they are working on updating their bunks. 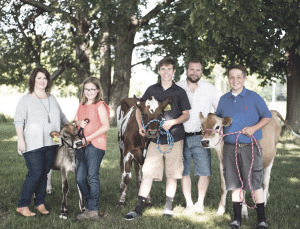 Julie specified, “The bunks needed new walls and floors to help expand their capacity while also providing a safer environment for our 25 employees.” They’ve also been working to fix their digester, which has been an excellent addition to the farm. Julie said, “It has been great being able to use the digester to apply nutrients to the hayfields and it keeps the neighbors happy.”

On top of ongoing projects, Julie said they’re trying to do anything they can to make their farm more efficient and take out some labor. They did some work on their pasteurizer and the Kubota they use to feed calves by making them more automated. The automation will decrease the amount of time employees are waiting around while the pasteurizer is cleaned out. They are also in the midst of building a satellite lagoon that will allow them to store about six million gallons of manure (if they have a really wet spring). It will also give them the ability to pump manure to it and drag line it to around 85% of their fields. This will eventually lead to less drive time on the roads and on the fields. Lastly, they are working to improve efficiency by installing an automated foot bath. This was done so less people will need to handle the chemicals and they know that things are getting done effectively and safely.

Julie said there are four farm values that they live by. Over the years they have worked diligently to be successful in safety, animal care, environment and integrity. Each day, they work hard to create a safe place for their employees and their animals while also working hard to improve their practices so they can care for the environment. They do it all while upholding their integrity.

Feel free to check out the Pattersons’ farm on social media @jampatterson on Instagram and Patterson Farms Inc. on Facebook.