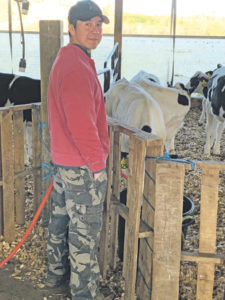 When the Murray family started farming in Copenhagen, NY, in the 1950s, their dairy looked much like others. But the family was progressive from the start, and quickly expanded with a free-stall barn and parlor in the 1960s, followed by additional expansions.

“I worked on the farm as a little kid helping my siblings feed calves,” said Mark Murray, adding that he was given the option to work on the farm. “I started milking and doing other chores when I was 14, and knew right away that’s what I’d end up doing.”

When Mark was in high school, the herd at his family’s Murcrest Farms averaged around 300 cows. While Mark had already decided he wanted to dairy farm, he also knew that herd size wouldn’t support two families.

After studying animal science and dairy business management at Cornell, Mark returned to the farm. Although the existing plan was to double the herd to include 600 cows, Mark said the increase helped with his decision to return. Today, Murcrest Farms LLC is milking just over 1,200 cows three times a day in a double-18 parallel parlor.

“We’ve been using almost 100% AI since the 1960s,” said Mark, adding that his grandfathers were interested in promoting good genetics in the herd. “One of my focuses over the last 10 years has been making more efficient cows. We’ve always had big cows, and I love big cows, but they also eat a lot. With better management practices, especially nutrition and forage quality, herd production and feed efficiency has been up year over year, even with smaller cows.”

As dairy manager, Mark makes mating selections. He maintains his own index for genetics and focuses on specific aspects to improve each cow, then works with the semen sales rep to ensure he’s selecting the best bulls.

Mark breeds the top portion of the herd with sexed semen to get the most desirable heifer calves to maintain or grow the herd. The rest of the herd is bred to beef sires. “We get replacement calves from our best animals, so it speeds up the genetic progress of the dairy,” he said. “We aren’t raising more heifers than we need, which eliminates that added feed cost and facility needs.” The increased cost of sexed semen is offset by the higher prices received for beef cross calves.

All replacements are raised by the Murray family. After colostrum feeding, calves are raised in groups of eight in a free-choice system. “My wife Sara is the calf manager,” said Mark. “She monitors calves and deals with calf health. Another full-time employee feeds and beds, moves calves and cares for weaned calves.” Mark’s father Lynn is a managing partner in the business, and his mother Peggy handles financials and bookkeeping.

Mark said raising calves in groups has multiple benefits, including increased growth rate and improved overall health. “The goal of the system is to eliminate stress on calves,” he said. “Calves always stalled in growth for a week or so when we moved them from individual stalls to group pens at weaning. Now those same eight calves are just changing barns.” Calves are housed in the same groups as they start a grain and hay diet, and there’s no social stress related to weaning. When calves are moved to groups of 30, they integrate quickly.

Cows and heifers at Murcrest Farms are fitted with SMARTBOW® activity monitors, which Mark said has increased heat detection rate and allows earlier intervention on health issues that might be missed in the early stages. “We’ve moved away from synchronized breeding to a more standing heat approach, especially with the heifers,” he said. “We allow the technology to do a lot of that for us.”

The monitors collect information on overall activity, which helps identify cows in heat and also tracks rumination. “There are two different health alerts,” said Mark. “An urgent alert means the rumination rate is dropping rapidly hour over hour. It also gives a long-term rumination alert – there isn’t a severe drop, but she’s eating a little less for several days.” Cows with acute mastitis, lameness or ketosis are evident, but the system allows him to catch cows trending with long-term rumination declines, and those are the cows that may be missed until they’re obviously ill.

One feature of the SMARTBOW® activity system is a location tracker that allows Mark to find the precise location of any cow at any time within three feet. “If I walk into a group of 150 to find one animal, I can find exactly where she is,” he said. “I don’t have to spend more time looking for her.”

Mark said the activity system helps significantly with transition and calving. With monitoring, pre-fresh cows can be left alone to carry out their natural behavior. “My goal is to let my cows do exactly what they want to do for as much of the day as possible,” he said. “By having the activity system on the cows, we can walk through and do visual checks and use the system to determine which animals to concentrate on and only disrupt their lives instead of every cow in the group. It lends itself well to our philosophy on cow health: to leave them alone and let them be cows as much as possible and only intervene when we need to.”

The current theme for Murcrest Farms is balance. “We crop close to 3,000 acres for our 1,200 cows, which is a lot of land for the number of cows,” said Mark. “It allows us flexibility and we can put up some of our own grain and build forage inventory. In 2014, the focus was on dairy production, with the majority of capital going to that part of the business. We’ve stayed at about the same size for a number of years, so now we’re using larger choppers, mowers, mergers and truck fleets to focus on forage quality. Purchasing larger equipment to cover ground faster has been a worthwhile investment that has paid off with better forage quality.”

While technology can improve cow health and crop quality, Mark said it doesn’t replace good people. “It’s another tool,” he said. “When we moved from notebooks to computers, it didn’t change the need for quality people – it gave them a tool to do their job better, more easily and faster. You can’t get rid of your best people when you get an activity monitoring system and expect the same quality, care and productivity. Give good people good tools and things get that much better.”

The Murray family has participated in educational videos (produced by American Dairy Association North East), which are available for viewing on the Murcrest Farms Facebook page.