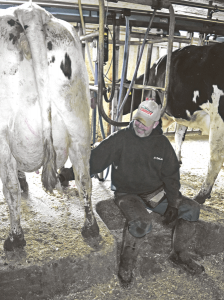 MILFORD, NH – In line with longstanding tradition, the latest recipient of New Hampshire Green Pastures Dairy Farmer of the Year award was recognized at two different events, held in adjacent states nearly five months apart: in September 2019 at the Eastern States Exposition in West Springfield, MA, and in February at the Farm, Forest & Garden Expo in Manchester.

The Fitch Farm LLC, an outstanding fifth-generation dairy farm, is owned and operated by 46-year-old Walker Fitch and his wife Sarah along with the nearly full-time help of his 79-year-old dad, David, who lives in nearby Lyndeborough.

“I’m still adjusting to Daylight Savings Time, and I started milking late. I usually get up at 3:45 a.m. but ‘springing forward’ has put me off schedule, still nearly by an hour,” he explained.

Walker milks eight cows at a time, with each standing on a low cement platform in a milking parlor that was created in 2000 at one end of a red clapboard barn, built for tie-stalls. The cows wait their turn in what was once the long end of that structure.

The farm maintains a rolling herd average of 25,334 pounds of milk, 952 pounds of butterfat and 762 pounds of protein, according to the UNH Extension website.

Walker’s father and his eight-year-old son, Kaiden, led a tour up a slight rise to a bright and spacious greenhouse-style free-stall barn where the milkers stay 24/7, along with the 35 or 40 heifers raised every year.

Like his son, David rises nearly every day at 3:45 a.m. and scrapes and cleans up all the manure on the extensive cement floors.

“Back in the fall of 1999 and into 2000, we put up the steel for the first three hoops of this modern barn, including the highest over the main aisle,” he recalled. “This was a project designed to double the size of our herd, from around 50 cows to around 100.

“We’d hoped to get a contractor to do the whole job, but we ended up doing it ourselves because no one turned out to be available. We did get a contractor to come and put up the two layers of plastic, separated by air, that make up the cover, and he finished the job just a day before the winter’s first big snow storm. We doubled the free-stall space for the cows and heifers by adding two more hoops on the other side of the main aisle later that year.”

David noted that the cows which doubled the herd’s size were ones they’d raised themselves.

“There was a lot of planning to make this all happen,” he said.

His son hopes to invest in installing a row of fans on the prevailing wind side of the structure, designed to keep the cows and heifers cooler during summers, which are increasingly becoming hotter, David said.

David proudly pointed out the three big bunkers in the barnyard where Fitch Farm stores its own corn silage and haylage as well as brewers’ spent grain (BSG, available from an in-state brewery).

The Fitches till several hundred acres, spreading manure and having their crops custom-harvested. Some of these lands are family-owned; some are leased. Some have conservation easements that keep them open and undeveloped, and there is an aquifer owned by the New Hampshire Fish and Game Department.

As a conservation measure, winter rye is planted as a cover crop. Back in the 1990s, Fitch Farm participated in a UNH Cooperative Extension manure management program, designed to reduce the use of nitrogen fertilizer.

Walker takes pride in selling raw milk at an affordable price for families: $5 a gallon. “I testified at the State House in front of a Senate Committee so that dairy farmers could sell 20 gallons of raw milk a day, when averaged over a week, without a license,” he said.

“I think the Fitch Farm was given the Green Pastures award because of its good long-term stewardship practices,” Walker explained. “When I was growing up and attending Alvirne High School in Hudson, the Fitch Farm was one of six dairy farms in town. Now we’re the only one.

He noted Pomeroy Farm in Mont Vernon is still in operation, and that family won the Green Pastures award in 2010.

Walker said he absolutely made the right choice in staying on the farm. The first Fitch owner bought it in 1860 to raise cows and chickens. “The last five years have been rough, but it was looking like it could turn around,” he said. “The coronavirus could be a setback for us all, however.”

Walker was less sure when asked if he would like to see either Kaiden or his five-year-old daughter Audrey remain on the farm.

Milford’s population is continuing to grow and now has over 15,000 residents, and the city of Nashua is spreading in its direction, he noted.

“We’re in a fishbowl here, where there are a lot of people who think they know more about cows and farming than we do,” he said. “My wife and I would be happy to see our children grow up and really want to be farmers, but we’ll never pressure them. Yet, if that happens, it wouldn’t surprise us if they decide to head to a place where farming remains in the mainstream.”