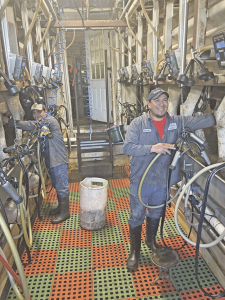 At a time when many second and third generation dairy farm kids left the family business, Kris and Unc Brock jumped in with both feet. Kris was working at an optometrist’s office and Unc had a trucking business. The couple had been around cows as kids and thought a small dairy operation would make an ideal retirement gig.

It didn’t take long to realize they didn’t want to wait. In 1993, they leased a farm in Valley Falls, NY, and began raising calves for another farm. Four years later, they renovated the barn, bought 50 fresh cows and began milking.

“What we wanted to do was a little crazy, but we both liked cows and wanted to have our own farm,” Kris said.

Wanting a place of their own, the Brocks looked at land across the area and into Vermont when a farm in Schaghticoke, NY, became available in 2001. The farmer had quit the dairy business years before and was ready to sell – but he wanted to make sure it continued as a farm and he sought the couple out.

“We were already established in the community and thought we’d give it a try,” Kris said. “He hadn’t milked cows here in a long time so we had a lot to do in the milking parlor and barns. It took about a year before we brought the cows here.”

Initially, the deal was they would never have more cows than Kris could milk on her own. For years, the American Dairy Association North East board member did just that. They started with a double-six milking parlor and have expanded to a double-seven unit. It’s an odd number, but since the couple runs a mixed herd, some of the cows are smaller and they can fit an extra in.

Currently, the farm milks about 170 cows and ships to Cabot for use in cheese and yogurt. At that size, Kris no longer does the milking – the family has a staff of about 10 and credits the employees with making it possible.

“We really have the best employees,” Unc boasted. “We couldn’t do it without them.”

The herd is a mix of Holsteins, Jersey crosses, Ayrshire and even a few Linebacks. The family was known as cattle dealers, willing to buy and sell from all over, and that presented a small challenge when they started milking.

“There was a stigma that we had to live down of cattle dealers not producing good milk,” Unc said. “I told our inspector that we have a theory, a rule. If we wouldn’t sit right down and drink a glass of it, then we don’t put it in the tank. We have good clean milk, good quality milk. We just had a 4.3 butterfat and 3.6 protein.”

When most dairy farms feed products to increase their herd’s total volume, the Brocks take a different approach. In addition to growing 750 acres of corn and grass hay for grinding and haylage, they use byproducts. Fish sticks, potato peels from a chip factory, croutons, tofu byproducts and more might show up in the feed bunk at any given time.

“The limiting factor of feeding croutons is the garlic,” Unc said. “When the truck driver opens the tank, the garlic smell that comes out of the milk blows the socks off you.”

Making a living off a milk check isn’t easy and is especially challenging for smaller herds. Diversifying the farm has been an important key to their success. In addition to the dairy, they raise about 100 goats. Most are sold for meat; however, some milk is sold to a local soap maker.

“We really got goofed up with the goats this year because of the coronavirus,” Unc said. “With Easter being cancelled we’re still feeding the ones we would have sold.”

Each year the Brocks raise about 1,000 turkeys and they also raise steers for beef sales. Instead of raising the beef cattle on site, they work closely with the local Amish communities who they send the steers to for custom feeding.

“They do a really great job for us,” Unc said. “We have several different partnerships worked out.”

Perhaps what they’re most widely known for is their Farmers Feed Bunk food trucks. With two units they cater weddings and attend fairs, festivals and events.

“I always said after our daughter Val graduated from college that I wanted to do something I enjoyed doing and I always loved to cook,” Kris said. “I would experiment on friends and make them vote for their favorite items when I first started.”

As first generation farmers the Brocks have created their own multi-generational farm. Their daughter Val Lavigne, who is also a licensed milk inspector, and her husband Greg work on the farm and are raising their three children in agriculture. Their twins Nora and Sadie (4) and Owen (2) are eager to give mealworms to the chickens, feed the goats and pitch in with other chores around the farm.

“There was no better way to raise our daughter and now the grandkids love being a part of it,” Kris said.