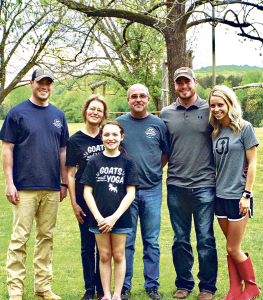 On April 20, the Fine Family Farm of Denton, NC, opened its doors to nearly 50 enthusiastic yoga students, eager to experience one of the hottest trends in their discipline – caprine vinyasa, better known as goat yoga. Cindy Purser of the Yoga Pilates Barre in nearby Albemarle, NC, guided students through basic yoga poses in the presence of eight curious Nigeria Dwarf kids. Precious moments abounded as the kids interacted with students, delightfully interrupting moments of focus and concentration.

Goat yoga started around 2016 in Oregon and has been described as a blend of yoga and animal-assisted therapy. Contact with the goats enhances the naturally relaxing state of yoga, allows for the release of stress and makes it easy to find one’s “inner child.” This was the first goat yoga session of the year for Fine Family Farm and an important step toward assuring this farm stays in the family for generations to come.

A generational family farm is a labor of love. Each succeeding generation builds upon a commitment to the land and the dedicated individuals who came before, leaving subtle layers of growth and progress. Andy and Missy Fine, their twin sons Cary and Christopher and their granddaughter Aubree are the latest family members to influence this land that has been passed down since its original land grant in 1792. Of the 300 acres that composed that land grant, 200 acres still belong to members of the family. The only land that was ever sold was a 100-acre track purchased by the U.S. Forest Service during the creation of the Uwharrie National Forest. “It’s a legacy that I intend to keep,” said Andy. “Adding agritourism to our existing farm operations is one more thing that I can do to make it happen.”

North Carolina has seen steady urban growth for decades, with farmland being gobbled up by development at one of the highest rates in the nation. Conventional crops and livestock operations often do not produce enough income to compete, leading farmers to explore fresh opportunities for their farms. The Fine Family Farm is located near the resort area of Badin Lake and is near the Charlotte metro area, making it a good destination for agritourism.

“We attended a seminar, worked with the local tourism bureau and visited as many farms incorporating agritourism as we could before deciding which route to take,” said Missy. The goat yoga classes grew out of Missy’s own involvement with yoga through her teacher, Purser. The Fines have a small herd of Nigerian Dwarf goats and a group of purebred Boers, making goat yoga a natural choice.

The Fines decided to restore the existing structures on their farm and take advantage of the natural beauty of the pastures, pond and forest instead of building public venues. “We want visitors to see a real working farm, not something that is staged for their experience,” Missy said. The Fines believe many farmers become so buried by their work that they take the unique qualities of their own farms for granted. “The things that you see and handle every day, like tractors or livestock, can be fascinating to someone who has not been exposed to them. Old farm buildings, like the well house here, had uses that they’ve never heard of.” 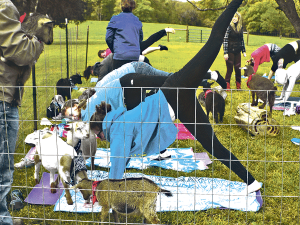 The Fines have renovated the circa 1936 farmhouse and the granary building where Andy’s grandfather once sold fertilizer. “We are keeping things as original as possible,” Andy said. “We even have the 1956 calendar that my grandfather used to give to his customers and my grandmother’s wood/electric stove.”

The Fines began receiving visitors in February 2018 and have already hosted a wedding, a graduation day, a children’s day at the farm, a pick-your-own pumpkin patch and the popular goat yoga sessions. Each has been a learning experience for the visitors and the Fines alike. “We want to build on our experience and add other activities as we are able,” Andy said.

Future plans include offering the farmhouse for special events or for a farm stay experience through Airbnb. The Fines enjoy local music festivals and can visualize the farm as a site for bluegrass and gospel music evenings. Missy is a retired elementary school teacher, so educational programs involving children have a special meaning. “It’s surprising how little some children know of nature and the outdoors,” she said.

The Fines have about 25 head of Angus-influenced cattle and are also considering the addition of grass-fed beef to their operation.

At the goat yoga class, students happily snap selfies as the kids nibble, nudge and climb. “It’s amazing how quickly the goats bond with the people,” Missy said. “I think they get as much out of this as the yoga students.”