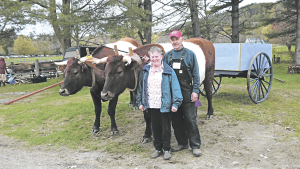 How Gail Billings came to own oxen is a longstanding love story. When her husband Chris, in his role as Santa, asked her what she wanted one Christmas, she said, “You’re going to think this is really strange, but I want a pair of oxen.”

Nonplussed, Santa said, “I’m just the man for the job.” He presented her with her first calves.

That was many teams and 28 years ago. Now 64, she has co-owned a six-year-old pair of red Dutch Belted, Harley and Davidson, since they were five days old. They performed during Draft Animal Day at Billings Farm & Museum in Woodstock, VT. Their breed is on the Rare Breeds Cattle Conservancy endangered list. Billings organized the day’s ox portion.

Her husband Chris’s connection to the Billings Farm dates back to the 1600s, when many Billings came to Woodstock and Plymouth, VT.

Her grandchildren, Hayden and Coy Lyford of Randolph, VT, followed in her footsteps as Teamsters, and have competed against Billings in the ring. They convinced their grandparents to start a 4-H group, so in 2014, Billings became leader of the Hooves ‘n’ Horns Working Steers 4-H group, assisted by Chris and their friend Rebecca Bushey.

“It is very satisfying to watch a green kid and a green team grow together, learn and soon become a team themselves. To watch their confidence level, social skills and speaking skills progress to new heights is an absolute thrill,” Billings said.

Whenever Billings is invited to attend an event with her cattle, she asks that her 4-H group of teamsters-in-training come too. She and her Hooves ‘n’ Horns teamsters made up nine out of the 23 teams that pulled the County Grammar School House to its original site in Brownington, VT, in 2016.

A rich history of Randalls

A resident of Randolph, VT, Billings has another team of Dutch Belted and three teams of Randalls. Randalls are the official cattle of Vermont and the state’s only native breed.

“No one seems to know where the Randalls came from. They were originally black and white and speckled. When people started bringing over Holsteins and Jerseys to improve the breeds that the settlers had brought, the Randall family realized that this special breed would be gone if they kept mixing the breeds,” said Billings. “Mr. Randall and his predecessors closed their herd, and didn’t let any animals on or off the farm… If the Randall family members wanted to show cattle, they had to show Holsteins from neighboring farms.”

Samuel Randall started his Sunderland, VT, farm in 1912 with his son Everett. When Everett Randall died in 1985, his widow sold the herd.

Cynthia Creech read an article about the Randall cattle, which had been bought by a farm in Adams, MA, and were again up for sale, and purchased them. In April 1987, the herd of 15 arrived in rough shape to her then-home in Louisville, TN. “At the time I bought mine, we thought they were the only ones still alive,” said Creech. Blood tests performed by geneticist Dr. Philip Sponenberg of VA-MD Regional CVM and American Livestock Breed Conservancy Tech showed that they were a distinct, unique breed. He advised increasing the herd and not to change them, echoing the caution of Samuel Randall. Creech has since connected with others who owned one or two, including Phil and Dianne Lang from Howland Homestead Farm in South Kent, CT. The trio started The Randall Cattle Registry (www.randallcattleregistry.org). 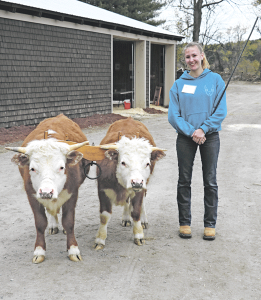 The Randalls had kept exemplary records. This year, in a concerted effort to track the rest of the Randalls, Firefly Farm of North Stonington, CT, put out a call for hair samples of Randalls for DNA testing. Billings and others sent in samples.

“In their intelligence and demeanor, they are very much like the American Devon breed. They are very dependable, and still act very wild: you put food out and they act like they are starving,” Billings said. “Some people wanted them for dairy or beef. We wanted them for draft animals. They are not big like Chianinas. They are very strong, have a touch of wildness about them in their heritage, definitely are more aware of their surroundings and are not so domesticated. They learn to trust you, and you learn to trust them. Our steers are castrated, so we are not promoting them by adding to the breed. We promote them by educating folks about this breed of cattle.”

The trust she has learned for her oxen is the best part. “If you’ve had a lousy day, you go out to the barn, and it’s so different. Their love is so unconditional. For me it’s a thrill if I can yoke them and go for a walk with them, can trust them to let people pat them. I’ve taken them to a bank drive-thru, to the local daycare center and to the senior housing.

“I like letting people see and learn about the oxen. A lot of people are training oxen as adults and turning into teachers,” she added. “Many people here have never seen an ox. I walk my cattle like you walk a dog. I have to be careful, because it ties up the traffic with people stopping to pat them. I get them used to potholes, dogs barking at them. Like a horse, you get them used to it. I train them so when they’re in a parade, they don’t get scared and run off.

“A lot of people love to ride by the farm on Sundays after church to see ‘the boys.’ Several people in the community feel like they are their animals,” she said.

When her 3,260-pound Red Holstein ox Crockett died, and another of her large oxen, Stratton, died, their loss reverberated throughout the community. At the Draft Animal Day, attendees were enamored of the oxen, and the pride that the young 4-Hers had in their teams was palpable.