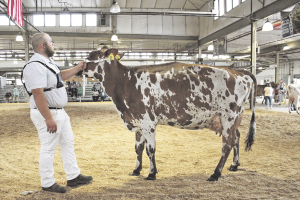 SYRACUSE, NY — Showing his cows at the New York State Fair recently offered 16-year-old Vince Pascarella a chance to represent the best of Pascaralla Family Farm. A senior at Cattaraugus-Little Valley High School this year, it’s obvious that Pascarella enjoys the experience. Each time he entered the ring, he alternated between expressions of concentration and excitement. The teen cares for his animals all year, preparing them with optimal nutrition, grooming and handling and his efforts paid off. His bearded, burly appearance lent the look of an older exhibitor, as did his comfort in walking his animals around the ring. Pascarella has been showing since he was eight years old and all that time in the ring also helped. He took home Honorable Mention in the Junior Show with his three-year-old and second place with his aged cow; third in the Open Show with his aged cow and 10th with his junior three-year-old. He brought two cows to the fair.

Pascarella Family Farm is a 100-head dairy in Otto, NY. The farm is home to 75 heifers and also raises 100 acres of corn and 200 acres of hay. Pascarella has served as president for three years at the Cattaraugus Little Valley High School’s chapter of FFA.

“I’ve always really been very into the dairy side of everything,” Pascarella said. “Most kids are into the tractors and equipment, but I like the cows better.”

In fact, Pascarella used to play football as a child, but gave it up at age eight when he began showing at the Erie and Chautauqua County Fairs.

He’s pleased at the interest fairgoers show in his animals.

“It’s surprising how people want to be educated about dairy information that don’t know,” Pascarella said. “They’ll stop and ask instead of just walking by.”

He likes showing to see how his animals compare with others. He selects all the sires and dams and purchases a lot of the semen using revenue from calf sales.

Pascarella advises children and teens who want to start showing to take care to get their animals accustomed to walking on a lead.

He added that newbies should “not focus on winning your first year. Take the steps and work our way up to winning.”

Although he receives tips from family friend and mentor Larry Hill of Kennedy, NY, Pascarella said exhibitors should learn to do their own animal grooming and not pay another person to do it for them. 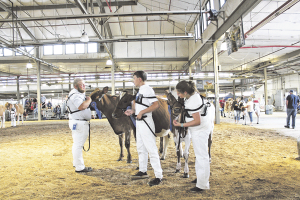 “Learn how and work your way up,” he said, “but if you have questions, ask someone who does know.”

At the show, it’s all about appearance.

“Have your cows as clean as possible and presentable,” Pascarella said. “You should be presentable too.”

Once in the show ring, it’s vital to stay emotionally positive.

“Don’t get angry or upset with your cow if she does bad in the show ring,” he said. “It’s not her fault. Cows can sense if you get riled up.”

An only child, he helps his parents Tony and Barb Pascarella. Tony works full-time at the farm while his mother is also a bus driver for Cattaraugus Little Valley School District. With so few working the farm, figuring out how to get everything done has been an ongoing challenge for the farm family.

“It’s hard trying to find help for the morning with our milk truck,” Pascarella said. “The time the milk truck comes, it would be hard for me to help get out the milk and go to school.”