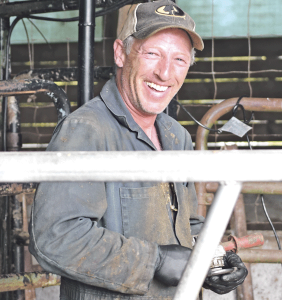 Trimming hooves used to be his full-time job, but now he only practices this specialty on weekends and works the rest of his work week as a skilled carpenter, he explained on his most recent visit on a Sunday in June when he trimmed a total of 35 cows.

“After all, years ago I earned an associate’s degree in carpentry at the New Hampshire Technical College in Manchester, now Manchester Community College,” Marquis said. “I lost about half my work in the Great Recession of 2008. Smaller family dairy farms sold their herds, often selling their land to far larger farms.”

There’s still a need for hoof trimmers, he said, noting that he figures he’s trimmed the hooves of 150,000 cows, plus some llamas, alpacas, goats, donkeys and Angus beef cattle.

Once cow Tiffany entered the trimming chute, Marquis could see her right front hoof was sore; she held it up off the cement floor before being strapped onto the hydraulic tipping table. After taking a closer look, he diagnosed her lameness and pain as stemming from hairy heel wart or ‘a raspberry,’ two common terms for papillomatous digital dermatitis (PPD) – the most common cause of lameness in cows.

Tiffany became somewhat agitated as Marquis treated the wart, including the hair-like projection for which it is named. After trimming the foot and cutting the wart out, he placed cotton dressing on the area and then wrapped a length of brown cling gauze around Tiffany’s hoof and ankle.

After a couple of days, Heidi Mason will remove the gauze and check out the hoof to be sure it’s healing well. Marquis credits her for the good overall condition of the herd’s hooves, noting that she’s the one who gives the cows foot baths to prevent soreness. The Masons milk 120 cows; they recently culled 20 to meet DFA’s milk quota.

Marquis also keeps his eye out for laminitis. Sore hooves can have serious consequences if left untreated – there’s a downward spiral, he explained. “First a cow with a sore hoof doesn’t want to walk, so she stays lying down a lot and doesn’t want to eat, and that affects her milk production,” he said. “Her overall general health is affected, and then she’s no longer on her regular breeding cycle.”

But most of Marquis’s trimming work is to ensure that a cow’s weight is evenly distributed on her hooves. He learned by doing as a part of a two-man team one summer when he was in high school. “If we treated a cow with a significant problem, we’d go back once a week to see how she’d progressed,” he recalled. “Then I had an opportunity to buy this equipment I’m still hauling and using for $9,000 in 1998. It’s a ‘dinosaur’ now; you can spend up to $100,000 for the more automated equipment that’s now available.”

“On average, I work on 30 to 40 cows a day,” he said, noting that he still uses a pen and notebook to write the name and number of each cow whose hooves he’s trimmed (plus any extras) so he can prepare a bill at the end of the day. He charged $10 a cow for his work at Northwinds Farm, plus extra fees for any wrappings.

Hoof trimming has provided Marquis a good living, working with animals and farmers, traveling from farm to farm, he said. He and his wife Melanie have two adult children and a 12-year-old, plus three grandchildren.

Marquis regrets that numerous factors have made it harder and harder for small family dairy farms to survive in Vermont and New Hampshire.