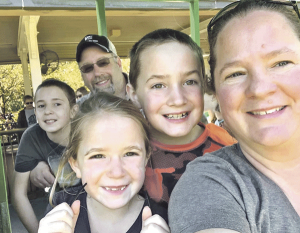 Just off of Route 20 lies a farm that goes by the name of Fesko Farms. Nestled in between Skaneateles and Otisco Lake you can find this dairy and crop farm. Kim and Eric Brayman are the brains behind this 4th generation operation. Along with raising around 730 milking cows, they have 3 young kids who also take interest in the farm life. They utilize a double 11 herringbone to milk their primarily holstein herd. Along with livestock, they crop 2,300 acres of corn, hay, wheat, oats, and soybeans, allowing them to have all of their cow chow grown in-house. They work alongside 12 full-time employees and a handful of part time employees as a way to keep the farm running smoothly, and take some stress off their shoulders!

To the average person driving by a dairy farm, it may look like everything is running perfectly. Everything is going just the way it should be. Most dairy farmers know that in reality, things are not perfect by any means. When the pandemic hit, it affected dairy farmers in a way that they never could have imagined. Stress levels quickly increased as the country went into a state of emergency. Like every other business, it hit dairy farmers out of nowhere, and they had to learn how to adapt very quickly. The cow’s can’t milk themselves and the fields need tending to. Farmers can’t just take a week off and figure out their contingency plan. It was just the icing on top of the cake of stress. When things started getting serious with COVID-19, stores were shutting down, more and more people were getting sick, and travel was discouraged, Kim and her family were in the midst of a much needed trip to DisneyLand. Lucky for them, they planned their trip for the perfect time, just before it shut down. She knew that when they got back to New York, after their fun trip, things were going to be tough.

She arrived back to the farm and immediately had to start brainstorming how to adapt to the world’s situation. Like most, her employees were scared. How were they going to get groceries? Were people going to be allowed onto the farm? She held a meeting mid-march and began addressing all of their concerns. She said, “It was the second week of March. We sat them all down and said, okay this is what’s going on and if you have any questions or want to talk about anything this is the time to talk about it.” Kim made sure to go over the NYS guidelines with her staff immediately, to make sure that everyone was informed. One of the first safety precautions that they implemented was hand sanitizer in all of the areas that were utilized often. She also put a box of masks out for the employees. She stated that many of the employees didn’t wear the masks, but they were there, just in case they wanted one. She added on by saying, “I could understand them not wanting to wear them in the parlor, as wearing them to the store was uncomfortable and hot just for that short amount of time shopping.” A long milking shift in a steamy, hot parlor isn’t very ideal. Many of the employees were concerned about how to obtain groceries every week. They were afraid of the virus and the grocery shelves were bare in the beginning stages. Brayman explained to her workers, “you have three options for shopping. The first option: you carry on like normal. Everybody goes to town, everybody goes shopping, do your own thing. The second option is I go shopping with one of the guys and we get everything. The last option is to use Instacart.” They decided to go with Instacart, which is a grocery delivery service, and so far it has been working great for them! She exclaimed that, “even now when we ask them if they want to go into town to get groceries since everything has calmed down, they say nope, and continue on with Instacart.” Their local school has also been providing free meals that the employees have been graciously accepting. The Fesko’s also sanitize tractors in between each use to ensure safety for their employees. She continued in explaining, “thankfully when someone gets in a piece of equipment they are the only one getting in it for the day, but if we knew it was going to be swapped out between people it would get wiped down.”

When asking Kim if they have a contingency plan in place she responded by saying they have some pretty amazing neighbors. At about the same time I was asking this question, her husband Eric, walked in and added to her responses by saying if anyone on the farm got sick, their neighbors couldn’t be there fast enough to help fill in a milking shift or run machinery. On top of having their loyal neighbors, they signed up for the Paycheck Protection Program which has been helpful to them in feeling more covered in these crazy times.

Fesko Farms ships their milk to DFA and DFA requires that they must drop their milk production by 15% as a way to combat the oversupply of milk in the market. While grocery stores sold out of milk, a huge part of the milk market are schools and restaurants, which shut down when the pandemic started, causing the price of milk to fall. Eric explained, “we had to sell off a bunch of low cows. We had a guy out of Pennsylvania that wanted to buy a group of 20 fresh cows and we sold them.” Kim added onto Eric’s point by explaining the selling of cows was, “twofold because they had to cut production anyways, and it served as extra income.” This was a hard decision to make because right before COVID, they had plans to grow the herd to get their barns to maximum efficiency. In order to combat the loss of cattle, Eric said, “we bought another farm’s base, as they were retiring. We were able to get back to where we were after the initial shock.” As a way to protect themselves from this loss of income in milk, they became insured under the Dairy Margin Coverage and the Dairy Revenue Protection.

We ended the interview with the topic of stress, because most of us have a lot of it these days. Kim said that milk prices, planting, and keeping the farm going are all very stressful aspects in her life, but says, “the hardest part has been trying to teach my kids!” With the schools being closed, she is now responsible for teaching 3 young kids on top of everything else. Fesko said, “we usually enjoy a good challenge, but this was a little overload.” We discussed how even though kids aren’t facing the struggles parents face, they are still sensing our anxious energy, hearing the conversations about cutting milk production, and it does wear off on them. Fesko said, “The kids aren’t sleeping well, and even the dog has been on edge.” We are all doing our best to combat and deal with the added stress that this pandemic has brought, but sometimes it’s good to realize we aren’t doing okay. She explained one thing that has had a very positive impact on her is the Zoom call she makes with other women involved in dairy each week. They grab a drink, open up their computers, and chat about their lives and how things are going on the farm. Kim said, “it is a great way to bounce ideas off of each other and just ask, hey what are you doing about this on your farm? Being able to pull off of each other is huge and makes me feel less alone in these crazy times.” Having that sense of togetherness is crucial in these very trying times.

Despite everything going on in the world, Kim and Eric adapt and do everything they can to raise happy, healthy, cattle and kids, all while caring for the land. Check out their Facebook page Fesko Farms for more about their life on the dairy!