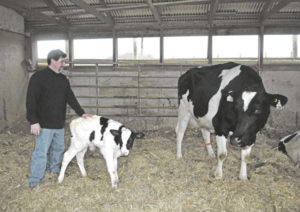 No matter how dairy calves are fed, the goal is the same: to make sure calves have a good start. While some farmers raise calves in pairs, historically, most calves are raised without direct contact with other calves. Using autofeeders for group-housed calves is a significant management switch and requires a commitment starting with personnel managing fresh cows and their calves.

“There are some benefits of group-housed calves – either paired or group-housed calves,” said James. “Calves learn from each other, have earlier starter intake, adapt better to novel situations and less stressful weaning.” He suggested starting with professional assistance from an ag engineer who can design a facility with adequate year-round ventilation, good drainage, efficient material storage, biosecurity and internet access.

A variety of autofeeder systems are available. When selecting a system, farmers should determine whether the company has good technology, software, dealer service and online and phone support.

Autofeeders should deliver milk or replacer accurately and consistently. Ideally, the system will be automated from the mixer to the calf nipple. Look for an autofeeder with a good sanitation system, and determine whether electrolytes, probiotics or prebiotics can be added in liquid or dry form. Can the system track data such as daily consumption, drinking speed, breaks, trends and health records, and can it interface with PCDART or DairyComp? Can the system back up data via the cloud?

It’s important to have the right people working with calves on autofeeders. Calf managers should have good observational skills, passion for calves and be diligent about sanitation. It’s also helpful if managers are willing to use data to complement calf observations. The herd veterinarian is a vital team member and should have a can-do attitude with good communication skills. Partner with the vet to plan vaccination programs, timely diagnostics and aim for nutrition that will allow each calf to withstand disease pressure.

Calves that will be managed in an autofeeder system should begin life in a clean calving area with plenty of tested colostrum. Calves are typically backgrounded individually for up to 14 days, then grouped according to age. The backgrounding area should be close to the autofeeder area to avoid stress from moving.

James said training to the autofeeder begins with a vigorous calf. “I move them in the afternoon after they’re fed,” he said. “The first training might be the next morning. Calves haven’t eaten, and I lead them to the feeder and turn on the pump. I may not train them again until the afternoon or the next morning. It has to be gentle – no fear, no hurry. Sometimes it takes a bit of tough love. If the weather isn’t too bad, let them get hungry. They learn from their peers.” He added that it isn’t helpful to continually aim calves to the nipple during training because calves quickly learn that a person will lead them to the stall.

The number of calves in each pen varies according to herd size. Smaller herds with fewer than 14 calves born each week are housed in what James calls “dynamic pens.” Calves are added continually but with no more than a 14-day age spread. For larger herds, pens are filled within a few days. When the youngest calf reaches weaning age, the entire pen is emptied and not used for several weeks before it’s repopulated. Stocking rates should be fewer than 25 calves per group, and the resting area should have at least 35 square feet per calf.

Establishing a feeding plan is critical. “You have to feed eight quarts of milk a day as early as possible,” said James. “If we feed less, they’re going to be hungry and calves will cross-suck.” Healthy, vigorous calves will consume eight quarts by seven to 10 days of age.

James said some machines will feed a blend of milk replacer and milk. But whether the system is feeding milk or milk replacer, consistency is critical. Milk or waste milk should be pasteurized. “We’re already starting out with a higher bacteria count in milk compared to milk replacer,” he said. “If you’re depending on unsaleable milk, monitor how much unsaleable milk you have each day. If you have enough waste milk to feed calves, you might have other situations to address.” James said well-managed farms have enough waste milk to meet about one-third to one-half of milk needs.

“Unsaleable milk is not free,” said James. “It costs money to produce it, so if you look at the cost of feeding calves, that should be in the equation. With milk replacer, you pay for quality.” He said for optimum gain, milk replacer protein should be no lower than 24%, and fat can be up to 25%. “Milk replacer must mix at 105º,” he said. “If milk replacer requires 130º to 140º, it will not mix in an automatic calf feeder.”

For the first 28 days, calves can drink as much as they want, but are limited to two liters per visit. “If they drink two liters, they have to wait two hours before the machine will let them have another meal,” said James. “At day 28, I reduce from ad lib to eight liters a day. It’s a wake-up call – it’s time to get serious about eating calf starter. We hold that at eight liters to stimulate starter intake and gradually wean between 42 to 56 days, from eight liters a day to two liters a day.”

Sanitation is critical – autofeeders are designed to include a cleaning cycle, and James said the automatic cleaning of the mixer, heat exchanger and through the lines to the nipple successfully mitigates health issues.

Feeding behavior varies among calves. Alarms can be set to notify the manager if a calf is not consuming a consistent amount of milk. “These data are supplements to visual observation,” said James. “Most calf managers walk the pens first, notice calves that are ‘off,’ then look at the data. If we look at the data first, sometimes we don’t look acutely at all the calves in a pen.”