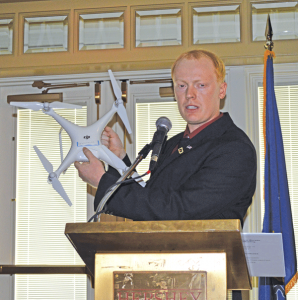 By actual definition, an unmanned aerial vehicle (UAV) is “commonly known as a drone, as an unmanned aircraft system (UAS) or by several other names” – “an aircraft without a human pilot aboard.” William Thiele spoke at the 69th annual meeting of the PA Farm Bureau about this topic. Thiele is a sixth-generation farmer from Butler County, north of Pittsburgh, and has been a Farm Bureau member since 2015. At the time of his speaking, he had been flying drones for four years, utilizing them on his dairy farm.

Note that drone farming is not an actual practice that suggests hands-on farming. There are other agricultural implements to take care of those chores, ones with specific functions to aid in planting and harvesting and everything in between. Drones, however, do manage to keep an eye on things – an eye in the sky. Thiele likened a drone image to photos that were taken back in the day by helicopter, such as aerial pictures of farm houses with surrounding acreage.

“There are two different types of drones used in agriculture,” he said. “One is a multi-rotor drone … and there is also the fixed-wing drone,” which resembles a wing without a plane. The fixed wing can cover hundreds and hundreds of acres. “It is literally something you just pick up and throw it, and it will take pictures similar to satellite images of your fields. The battery life in a multi-rotor drone is different than that of a fixed wing. It can only go out a mile or two in some cases.” Both are used for the same purpose, however.

Referencing wet spots in a particular aerial shot of farmland, taken by the drone, Thiele maintains “there’s stuff you can’t see from the air, especially in a state like Pennsylvania where we’re not exactly flat as a tabletop around here in most spots, so we need to be able to see what is over top and see what we can do to apply fertilizer, apply spreading, things like that.” Showing a slide taken by the drone, he noted an area that laid low “where corn was supposed to go,” but the photo showed a huge flood patch of water from the roadway well into the field.

Pioneer Seeds has Impact Plots, which looks like a grid of varying greens and some tan shades when seen from the air. Thiele saw them when he attended a seminar. “The purpose is to take a drone and to fly over top of these crops, which were collections of different corn hybrids in these plots, to see which one is doing the best judging by the color,” he said, adding that drone views of this really beats walking through all the corn, something that can be wearying by the end of the day. He noted that inspection of any of the hued plots can be examined in this fashion simply because you have a drone.

A Normalized Difference Vegetation Index [NVDI] “is a software you can get for a drone just like mine that results in maps like this one,” showing an area shaped like Pennsylvania but reversed, with a squiggle, colored mostly green with un-rhythmic red spots randomly placed all over the map. “Reds are the bad spots and the green is good,” he explained. “With this application, you can see what your crop health looks like.” It can also be paired with something called Drone Deploy, an app that assigns the drone missions – to go back and forth on the fields, photographing images. It will stitch together a photo of a field from which the user may mine data and thus determine plant health. This is more advanced than flying and snapping photos, “but it is something that is being used in the agriculture world today.”

Drones can be used to check on livestock as well. “I’m sure many of you have pastures that go down over steep hills, where your cows are covered by trees and you can’t see them from your house or your barn,” Thiele said. He noted there’s a feeling of comfort in knowing that you can send the drone out to check and see what’s going on in situations like that. “It beats walking out to the site.”

This raised another point. “The first time I flew my drone out over the cattle,” he related, “they were scared to death. They were afraid of the buzzing sound, and freaked out, taking off and running the other way. The second time I did it, they had begun to get used to it.”

A survey of 269 U.S. farmers showed that three-quarters of them would use drones at some point in the future, and that 51% already own and use drones. Forty-nine percent will hire an operator. The April 2018 Munich Reinsurance America Inc. Survey also indicated that 83% use drones daily, once a week or more. Seventy-three percent use drones for monitoring crops, and 46% for soil and field analysis. Forty-three percent engage in drone use for health assessment of crops and livestock. But the survey also listed security concerns: 76% were concerned with drones themselves, 23% have privacy issues, 20% were worried about cyber security and 17% care about potential damage or injury.

“Those who use the drone daily do stand counts, see what the crops are doing. And that’s every single day just to see if there’s any difference from the day before,” Thiele said.

The drone Thiele brought with him cost about $1,800, but his parents got him his first drone for $300 (a beginner’s model). When you purchase a drone, you must register it with the Federal Aviation Administration. The FAA doesn’t want drones to fly higher than 400 feet because of low-flying aircraft in that same space. Horizontally, Thiele can go as far afield as four miles away. He has never gone the four-mile limit, but has done three miles. “It’s a bit scary when you’re that far away,” he said, “especially when your battery starts to get a little bit low and you start to get nervous. Whenever your drone takes off, it will record a ‘home point’ which is known as altitude zero. If I go one mile away, then click my ‘return home’ button on my controller, it will make a beeline right back to that home point.”