According to a national phone survey, 400 U.S. agricultural producers think the new year will see a “modest improvement” for their operations. As you take a look at your own bottom line, you’ll have to be the judge of that.

Based in the Midwest, the reputable Purdue University/CME Group Ag Economy Barometer indicated the Index of Current Conditions and the Index of Future Expectations were higher in December than November. “The rise in the Ag Economy Barometer was primarily driven by farmers’ perception that the current situation on their farms really improved. The sharp rise in the Index of Current Conditions is correlated with the farm income boost provided by the ongoing rally in crop prices. That appears to be the driving force behind producers’ optimism,” said James Mintert, the Barometer’s principal investigator and director of Purdue’s Center for Commercial Agriculture.

However, the confidence isn’t over the moon. “Producers were noticeably more inclined to think now is a good time to make large investments in their farming operations than in November,” said Mintert. Some experts surmise the positive response might be a function of year-end tax planning and figuring how to apply COVID relief funding. While farmers were bullish about increased farmland values, more producers said they expect farmland cash rental rates to rise in 2021.

“Farmers were less optimistic when asked about the ongoing trade dispute between U.S. and China. By December it dropped to an all-time survey low of 47%. When asked whether they expect U.S. ag exports to increase over the next five years, only 51% of respondents in December said they expect to see export growth,” indicated Mintert. U.S. exports to China have increased substantially in recent months, especially for corn and soybeans. In turn, the rise in exports has been key to the improvement in crop prices. Despite that, producers have become less optimistic that the trade dispute with China will be resolved in a way that’s beneficial to U.S. agriculture.

In the December survey, farmers continued to express concerns following the November election about several key policy issues affecting agriculture. “Over 80% of farmers in the December survey said they expect environmental regulations to become more restrictive. Over 70% of producers expect to see higher income and estate taxes. One-third of farmers said they expect the farm income safety net to weaken, and just over one-fourth of producers said they expect government support for the ethanol industry to weaken,” Mintert said.

In dairy, forecasted total milk production has been moving upward. “Increased milk production itself would place downward pressure on prices, but taken with recent demand signals, there is some room for cautious optimism,” said Nicole Olynk-Widmar, professor of agricultural economics at Purdue. “U.S. dairy prices are competitive presently on the global market; we’re expecting higher exports of cheese, butterfat and dry skim milk products. While U.S. butter prices have been the focus of attention for multiple years, they have lowered considerably and presently even U.S. butter prices are competitive on the world market.” 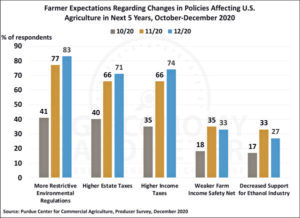 Locally, there is some optimism despite the pandemic. Beginning, small and medium-sized farms are getting more consumer-direct dollars and that is leading to more expansion plans and diverse enterprises to fill the need. Businesses that support these farms are building more facilities, fencing systems, greenhouse infrastructure and are selling or renting more equipment. And it’s hard not to realize the backlog of processing space, and even buying freezers and refrigerator units has been in high demand.

This year’s virtual Cornell University Dyson School of Applied Economics & Management 2021 Agricultural and Food Business Outlook Conference on Jan. 25 and the USDA’s 97th Agricultural Outlook Forum virtual event Feb. 18 – 19 will give many farmers a better context for 2021 and beyond.

Each month, the Purdue Center for Commercial Agriculture provides a short video analysis of the barometer results, available at purdue.ag/barometervideo. For even more information, check out the Purdue Commercial AgCast podcast. It includes a detailed breakdown of each month’s barometer in addition to a discussion of recent agricultural news that impacts farmers.