Farmers get face-to-face with elected officials 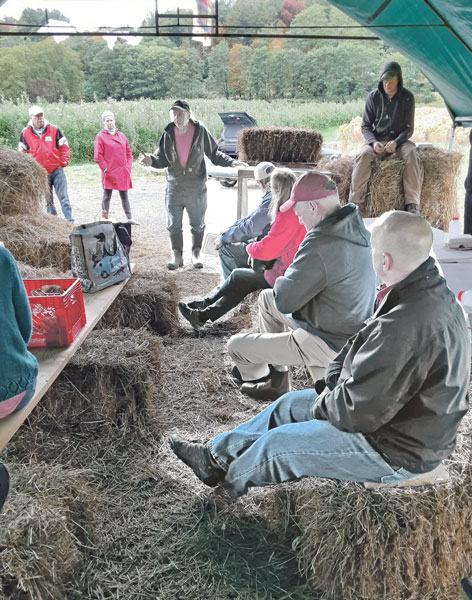 Don’t just talk, show. That’s the key to a strong presentation, and that’s what farmers of varying experience, age and production did recently on the Food, Water and Climate Farm Tour, hosted by Cornell Cooperative Extension. Over the course of two days, legislators from across New York State toured operations, asked questions and heard concerns straight from the mouths of those most affected by rules and laws pertaining to agriculture.

The first day included a visit to Richard Giles and Kalan Joslin’s farm, Lucky Dog Organic LLC, and the 607 CSA at Lucky Dog Farm, managed by Tianna Kennedy, in Hamden, Delaware County. Forty-two local farms work with the CSA to market their farm products in the region and in New York City. Day one wrapped with remarks from State Assemblymember Donna Lupardo (D-123 and chair of the Committee on Agriculture) and New York State Ag & Markets Commissioner Richard A. Ball.

Lupardo said the first thing she did after she was elected was take advantage of an invitation to go on farm tour, and it dramatically changed her perspective. “Since that point, I’ve been very interested in all things agriculture,” she told Country Folks. She’s known as the state legislator who’s worked hard to change the rules for industrial hemp and the craft beverage industry – and she’s continued her tradition of going on farm tours.

“The tours have taken on more of an urgency and more of a significance since the pandemic,” Lupardo stated. “And my colleagues from New York City have shown more of an interest in coming.” Big reasons for the interest include the supply chain issues and the Nourish-NY program, which has strengthened the connection between New York’s agriculture and its urban areas over the past 18 months.

The second day began at Ean and Kate Mitchel’s Chicory Creek Farm in Mt. Vision, Otsego County. Kate said before settling where they are, they looked at land in Otsego, Schoharie and Delaware counties but were priced out of the other two. They own 12 acres of arable land, with 4.25 in production now. Their markets are wholesale, food hubs and a little bit at their farm store. “There’s not a lot of markets out here, so our main focus is growing stuff we can store, stuff that can last in the field,” she explained. They grow crops for November through January, and are expanding into greens. Ean added that being able to produce on the edge of the growing season was how they “wheedled” their way into the market.

Kate said an advantage of buying an old dairy was the number of buildings on the farm. Focusing on state support, she noted that a grant from NYS Ag & Markets allowed them to insulate a main barn, bringing it up to GAP certification. “The timing of the grants has been so fortunate … but you need to be established to get them,” she noted.

“We’re big on efficiency – both in how fast and how long something can last,” Ean added. That includes their two high tunnels, for which they received assistance from NRCS.

Unlike some farms, Ean said that with a lot of the decisions they make, the financial aspect is put on the back burner. Sustainability is their end goal. But, for that to be possible, Kate told their visitors it would be helpful to have more small-scale resources for soil, water and manure testing.

At the next stop, Brick House Road Farm in Richfield Springs, owner Steve Purcell said he’s also interested in longevity, and he’s done that through some trial and error and some assistance from the local SWCD. A former dairy farmer, Steve sold off his herd in 1998 and transitioned to grass-fed beef. One major change he’s implemented is a covered barn yard for winter, with the goal of keeping Fly Creek, which runs through his property, as pristine as possible.

Steve raises between 40 and 70 head of Red Angus (along with some pigs and chickens – he once raised ostriches too) on his 130 acres, utilizing 18 pastures for rotational grazing. After the cattle are done grazing, he composts their manure and spreads it on the pastures before the first snowfall – manure is “a very valuable byproduct,” he said.

To make his operation cleaner and more efficient, he’s hoping to create a manure storage facility and install a cattle handling system in his barn. Farmers also need good transition plans. Steve said he has fond hope his granddaughter will take over the farm he’s owned since he was 24.

The final stop was at Willy Bruneau’s Middlefield Orchard south of Cooperstown. A true do-it-yourselfer, Willy explained that the 128-acre operation, which includes both fruit and vegetable production, was his “retirement project.” He does U-pick berries, apples and pumpkins, hosts a corn maze and sells at three farmers markets.

His farm was formerly a hay and corn field. “I built everything myself,” Willy noted. And because of that, he doesn’t want the government involved in his business – no grants, no government assistance. “I want to fail or succeed on my own.”

He faces his challenges head-on, and shared them with his visitors. It was rainy for both days of the tour, and Willy noted weather affects both his production and sales; a hailstorm in July damaged a lot of his apples. Another issue is the constantly changing list of allowable pesticides and fungicides he can use. He said he has to gamble every year, hoping that what he purchases in January can still be used in May. “A lot of chemicals are already federally regulated, but New York State is often tougher,” he said. “Farmers need time to adjust.”

Salary adjustments are another major challenge, especially for small operations. Willy said at one point he figured out that he makes about $4.29/hour – but he has to pay $15/hour to someone who doesn’t know what they’re doing. His suggestion to the legislators is that there needs to be a difference between the minimum wage and a livable wage.

Lupardo said she recently had a meeting with the state’s Legislative Women’s Caucus, and their priorities for next year include agriculture, food and nutrition. Awareness surrounding these topics is increasing, and there is renewed interest at the state level. She said they’re putting together a package of ideas for their colleagues and for the governor – and at the top of the list is processing, for meat, dairy, hemp and fiber.

“One of the things that brought this to light was when all the Midwest processing plants had issues with COVID. People starting buying local, but local processors couldn’t meet demand,” Lupardo said. She’s aiming to make it simpler for farmers of all types to process whatever goods they grow or make.

They also want to make it easier for farmers and school administrators to participate in farm-to-school programs; resolve transportation issues for the movement of agricultural goods; and focus on climate support. Lupardo is the sponsor of a bill to establish soil health programs to assist farmers in improving the health of their soil, and she wants to continue discussions of solar siting – specifically, protecting prime farmland.

In addition to participating in farm tours, Lupardo is in regular touch with trade associations, cooperatives and New York Farm Bureau. If farmers or growers have issues they wish to discuss, they can reach out to their associations or their assemblymembers and senators.