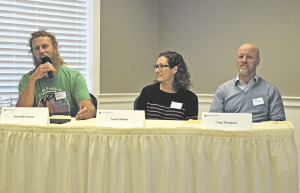 GREENLAND, NH – The highlight for most of the 80 farmers who attended the New Hampshire Direct Marketing Conference – “Agritourism: Building Connection Between Farmers, Customers and Community” – at the Portsmouth Country Club on Nov. 4 was the frank and open discussion by those who have taken the plunge into this new world.

Partners Craig Thompson and Sarah Heffron of Mayfair Farm in Harrisville, a town of about 1,000 in southwest New Hampshire, and Jeremiah Vernon of Vernon Farm in Newfields, a town of less than 2,000 in the fast-growing Seacoast region, had stories to tell.

Thompson and Heffron run a small-scale diversified family farm and commercial kitchen, offering farm-to-table catering that reflects what’s ready to harvest. Their experience demonstrates that adaptability and a well-developed ability to roll with the punches is key to being successful at agritourism. The couple, parents to two young children, were able to turn adversity into opportunity.

Their very rustic multi-use barn, used by sheep in winter and for parties in summer, burned to the ground in 2017, but they were able to build another one, designed specifically for weddings, farm dinners and other private events. A presentation Thompson narrated showed how this handsome structure, which accommodates up to 120 people, is the center of their agritourism business.

A visit to their website (mayfairfarmnh.com) not only shows weddings and dinners, but also shows the food and tourist items that are for sale both online and in their on-site farm store.

A decade ago Heffron traveled to Bend, OR, to study pastry preparation with an internationally recognized teacher and baker. Since then she’s turned out quantities of delicious croissants, breads, quiches and cookies, plus catering meals.

Thompson raised dairy goats as a youngster and as an adult spent 20 years training horses. Now he raises heritage pig breeds and Dorset cross sheep, using their woods and pastures. The farm’s orchards yield apples, pears, blackberries, blueberries and raspberries. They also rent out a three-bedroom cottage through Airbnb on the property from Memorial Day through Christmas.

Thompson is also the state representative for the six towns that make up Cheshire-14, serving on the House State-Federal Relations and Veterans Affairs Committee.

Vernon, in contrast, explained that while he and his wife Nicole also had started out running a diversified operation, they have ended up essentially raising only one major farm product – 20,000 chickens a year – plus mushrooms. They plan soon to replace some of their poultry structures with more efficient ones. They buy their chicks from a producer in Missouri and have them slaughtered at a USDA-inspected facility in Maine.

Vernon said they started down the route of having multiple agritourism offerings, but they found they suffered from what he dubbed “event fatigue.” Then he found that he can have skilled chefs come and cook their chickens with results that are far better than he had ever achieved, often by trading for CSA shares. The proceeds from these farm-to-table meals go to the chefs and workers.

“What we’ve found is that people are looking for an honest, unique outdoor experience that they can enjoy more or less spontaneously,” he explained. “We don’t sell tickets in advance and, if rain is predicted, we cancel a couple of days ahead of time. The price charged for the meals and music together is not too high to draw the numbers we want. I think a lot of farmers don’t charge enough for what they work so hard at to sell.”

Both Vernon and Thompson said a downside to agritourism is that it’s sometimes hard to squeeze out enough personal time and to establish boundaries to maintain the privacy of the family’s living quarters.

“I’m best at working with animals and having people around a lot can be stressful,” Thompson admitted.

Vernon noted there is a conservation easement on the 33-acre Vernon Farm whose restrictions must be observed. Reaching profitability after acquiring the farm in 2014 took a lot of work, he said. In the first years, they put in a lot of time on the road, going to every farmers market and talking with every restaurant, putting flyers on parked cars and strategically using social media. The couple are raising three young children.

The audience asked a lot of questions, including how much debt these farm families carry.

Vernon responded with a classic answer: “Farming and debt go hand-in-hand for a lot of folks.”

Thompson replied, “Margins are low in farming, and risks are high.”

Others speakers at the conference included Shari King, supervisor of outdoor advertising with the New Hampshire Department of Transportation, Bureau of Traffic, who explained that all states must follow federal sign rules within the right-of-way on state highways and interstates in order to keep the all-important federal highway monies flowing. She brought sample applications that farmers must fill out if they qualify for a tourist-oriented directional sign, pointing the way to their agritourism business, either year-round or seasonal. A qualifying farm stand must be open a certain number of hours each day, five days a week.

Gail McWilliams Jellie, director of agricultural development in the state Department of Agriculture, had nothing but praise for the work being done on ag’s part by the New Hampshire Division of Travel and Tourism Development of the Department of Business and Economic Affairs. The professional marketers contracted produce the colorful maps and brochures that promote the state’s agritourism offerings, including wine and cheese trails, farms and gardens and “Experience Rural New Hampshire,” through March 2020.