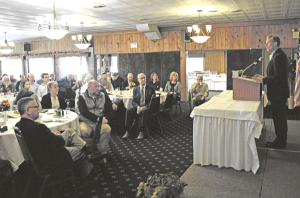 At State Rep. Mindy Fee’s October Farmers’ Breakfast, an event in which Lancaster County legislators bring farmers and others up to speed on what is being done in the state capitol of Pennsylvania, State Sen. Ryan Aument laid out a template for success. “We [Fee, Rep. Dave Hickernell and myself] work exceptionally well as a delegation between the House and Senate. One of the things I’ve been proud of over the years is the measure of influence that the Lancaster County delegation has had in Harrisburg. That is important not just because we’re interested in maintaining and holding onto power and leadership positions. I am privileged to serve on the Senate Leadership Team. We now have seniority, which gives a number of our members the opportunity as committee chairmen.

“The reason we work so hard at this is so that we might shape a legislative agenda in Harrisburg. We believe that Lancaster County can help point the rest of the Commonwealth toward the path of economic opportunity and upward mobility. We understand that economic opportunity is not primarily driven by government. Rather, it is driven by what we know and understand so well here in Lancaster County – strong families, vibrant communities, good schools, the free enterprise system,” Aument continued. “The work that you do serving the agriculture industry in Lancaster County is phenomenally important. Our goal is to make our legislative agenda reflect Lancaster County’s values as well as the diversity of our economy. The Lancaster County delegation this budget cycle was incredibly influential when it came to some of the important investments that we made in agriculture this year – restoring a $4 million cut to the Department of Agriculture, boosting agriculture funding by more than $19 million – not just increasing funding, but insisting that those dollars are well spent, ensuring that we are tracking and monitoring the outcomes.”

Dr. Greg Martin with Penn State Extension was the lead-off speaker at this year’s breakfast. “Lancaster County alone is ag central for the Commonwealth, in many ways,” he said. “This county has more chickens, more laying hens, than any other county in the United States … There are 30 to 40 chickens for every man, woman and child in the county.” The Lancaster farming community “allows us to have more income to buy other things,” he added. “We are using so little of our money to buy food that it allows us to buy other things, which helps to drive the economy.”

Taking a cue from Aument, Martin reasoned, “A lot of our economy in the United States is due to the efficiency of our farmers across the country. If we look at how productive we are, we are the fourth largest egg producer in the U.S. That’s over eight billion eggs, or enough eggs to fill this room from floor to ceiling and wall to wall and still have some left over, which is about $673 million in production.” Martin feels that a call should be put out for more poultry vets to work with farmers on the Veterinary Feed Directive and other things insofar as coping with diseases. The FDA and drug manufacturers agreed to remove production uses (growth promotion and feed efficiency) for antibiotics that are medically important, and to require veterinary oversight for use of these antibiotics in feed (requires a VFD) or water (requires a prescription).

Martin mentioned another threat: encroachment from urban settings. Referencing Lancaster farmer Luke Brubaker, Martin pointed out that Brubaker’s farm was there first. “The town moved to you,” Martin said. Now Brubaker has to deal with “What’s That Smell? Syndrome,” a disorder that seems to come with urban emigres who move to the country without first doing their homework. Besides alien fragrances, newbies also find fault with noise and dust. A bottom line question that Martin posed to his audience centered on soils. “Soils are important to us. If you build on good soils, what are you going to be planting your foods into? I think that strategic planning when considering urban development needs to take into account what is the soil value of those lands we’re taking and using for other things?”

“We do work quite a bit in the area of workforce development,” Martin said. A poultry major by training, Martin revealed what he calls “the biggest secret in the United States.” “If you have a degree in poultry, especially in the case of our school [Penn State], most of the time students have at least six or seven job offers before they’re juniors in college. The poor student who is having problems getting a job should have been a poultry major. The worst case I know of was a junior who stopped interviewing because he had eleven job offers. There is a demand for those people. They have to be smart, well-trained and willing to work.”

Martin finished with the idea of ag literacy. With 2% of the American population involved with agriculture, that means 98% are not. Agriculture is something the average person fails to grasp. “‘I don’t have to worry about agriculture. I get my food at the grocery store,’” Martin said. “I hear all kinds of stories – that we’re filling our animals full of hormones. It’s against the law to do that with poultry. They don’t know that.”

People don’t know where their milk and food come from. Martin thinks that should at least be touched upon in elementary school through high school because at one point in America’s history, the numbers were reversed, with 98% of the population dedicated to agriculture. America’s earliest presidents were farmers!