Farmer Pete and his sheep 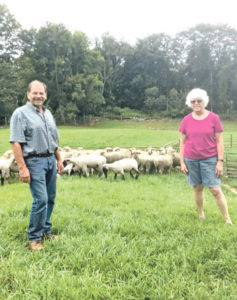 Pete Sepe, known in his community as Farmer Pete, has been raising sheep for a long time – starting as a youngster in 4-H and continuing through high school. After high school, when he was headed for Cornell, Pete gave his sheep to his brother.

Pete continued his education at the University of Connecticut and became certified in ag education. For the next 28 years, Pete and his wife Carol raised sheep and taught high school ag. Pete also served as an FFA advisor for many years.

After their children were on their own, Pete and Carol decided to keep raising sheep. Their daughter, an ag economics major, encouraged her parents to create a business plan.

“When your kids are telling you what to do, you know you’re moving on in life,” said Pete. “Our business plan is to promote American lamb. We raise lamb for fun and profit. I taught students that agriculture can be sustainable, and we’re proving it can be.” He said farming includes sacrifices and hardships, one of which was a move that forced them to reestablish themselves in a new location.

Today, the Sepe Farm in Sandy Hook, CT, concentrates on raising lamb and wool. “I think chefs and butchers are key people in the mix,” said Pete. “Chefs want to know how lamb was raised.” Pete is fascinated when he hears chefs becoming excited about lamb and explain their plans for the lamb he has raised.

Pete said butchers are also key in the process because they’re on the frontline fabricating. Chefs have learned to fabricate lamb in culinary school, so it’s a matter of them having sufficient time to do it and knowing what to do with lesser-known cuts.

“Another part of our business plan is the whole animal concept,” said Pete. “Not only the lamb, but also the wool or the sheepskin. We also sell whole lambs or half lambs to people in different cultures – each culture has its own perfect size. Greeks and Italians want baby lambs, Portuguese want them a little bigger, and Muslims want them bigger yet. Even chefs want a variety of sizes.”

Pete spends a lot of time developing relationships with chefs and learning how they communicate. “Chefs like the whole animal concept and are creative, and that’s what we need,” said Pete. “Some like ground, others like boneless cuts and some like to use shanks. Sometimes chefs want the ribs frenched, which is a delicate and time-consuming process. They are creative, and we need their unique creativity.”

The Sepes’ flock is comprised of natural-colored ewes, and they are strong supporters of 4-H and FFA programs in southern New England. “We want to support the youth,” said Pete. “With the pandemic last year, many shows were cancelled. The kids were raising lambs but didn’t have anywhere to sell them. We bought quite a few lambs from youth, and we also buy from farms in New York and Pennsylvania.”

Pete and Carol purchase lambs of different sizes and feed them out to whatever weight customers want. “Some chefs and butchers have told us what size they want,” said Pete. “We work with USDA inspection and also custom processors.” The majority of lambs are British breeds, including Hampshire, Suffolk, Shropshire, Southdown and Dorset. Because some Middle Eastern, African, South American and Central American customers prefer the smaller-framed hair breeds, Pete raises those as well.

The Sepe Farm flock is grass-fed as long as there’s grass, supplemented year-round with second-cutting hay. “We also feed non-GMO grain,” said Pete. “My nephew is a farmer on Long Island and he raises non-GMO in his corn maze. The ration is a formula developed by Michigan State University – whole corn with non-GMO alfalfa pellets to raise the protein content.” The average lamb spends six to eight weeks on the Sepes’ farm and will go to market at about seven to eight months of age. Pete said the fat on finished lambs is crisp and white, and he receives a lot of compliments on carcass appearance.

Pete promotes the importance of a low-stress environment for lambs. “We weigh them every week,” he said. “We track their weight so we can see that they’re doing well.” Although they have had requests for organically raised lamb, he won’t do it because he doesn’t want to compromise animal health by not deworming.

In addition to lamb, Sepe Farm customers can purchase wool blankets. The blankets are made through the Connecticut Blanket Project. When Pete couldn’t find a mill that was willing to keep New England wool separate, he worked with about 25 other Connecticut sheep producers to form a cooperative. “We now have 3,000 pounds of wool that the mill will keep separate,” he said. “Massachusetts producers are making Bay State Blankets, and Rhode Island producers are producing Rhody Warm.”

The Connecticut group works with wool producers in Massachusetts and Rhode Island to gather and ship wool to South Carolina for scouring. The spinning is done in Rhode Island, and then the yarn is sent to a mill in Massachusetts that will weave the blankets in different patterns.

Wool is pooled and shipped to South Carolina in June, and ideally, blankets are available before Christmas. Last year, the mill moved their machinery to another location so blankets were just recently returned to farmers. Customers seeking sheepskins can select one that’s just right from the assortment offered on the farm’s website.

In addition to raising lambs, Pete is a professional sheep shearer, which he considers another aspect of farm sustainability. Pete shears his own sheep as well as other flocks, and also shears the sheep at several New York City zoos. “By shearing in public and doing a nice job, we’re promoting why we shear sheep,” he said, noting that some people still believe shearing is inhumane. “We explain and educate the public. I enjoy working with zookeepers, teaching them how to handle sheep. We give the public a sample of wool to feel in their own fingers and talk about the spinning process.”

Pete serves as the president of the Fairfield County Farm Bureau, which is the third oldest Farm Bureau in the country. “We believe that Farm Bureau protects the right to farm,” he said, “but they do not tell you how to farm. The great thing about Farm Bureau is networking – bringing up the problems and farm issues and have them solved. Farm Bureau is like having insurance – we farmers have to stick together.”