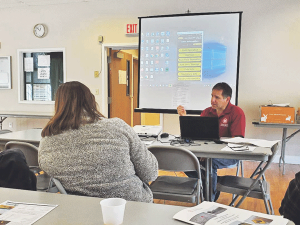 Despite rising costs of these and other business categories, commodities pricing has remained the same. According to Dayton Maxwell Jr., the farm business management educator for Cornell Cooperative Extension of Washington County, corn sold for $3.80/bushel in October 1974 and $3.87/bushel in October 2019.

“How do you balance all of those rising costs? You have to become more efficient at what you do to have better margins and grow the top line of your business,” he said.

“You have to have a different way to think about business,” he said. “It’s a set of activities that encourages money to flow to you or your business.”

At the same time those activities are conducted, expenses are incurred and debt may be accrued. Typically, capital investment in short-, medium- and long-term assets is necessary to attract money supply dollars, according to Maxwell.

He emphasized that liquidity is the first line of defense against price volatility. He defines liquidity as a business’s ability to meet short-term obligations, such as pay bills as they come due, and it’s made up of three components: working capital, current ratio and near cash.

“It gives an idea of how long the business can operate without income, and 8.3% of annual operating expenses would equal one month,” he said.

Liquidity comes from income and can’t be achieved through borrowing. Knowing your costs of production by each enterprise and maintaining an equity of 40% or higher (30-40% during expansion) is key to sustaining a business long-term. Goal setting and regularly checking on progress toward those targets is critical for creating a viable business. It doesn’t happen overnight and it’s an on-going process.

“Embrace the unspoken rule – never stop learning,” he said. “Spend two hours a week reading and get off the farm at least three times a year. Those who are always trying to get better will be here for the long-term.”

Aaron Gabriel, a senior Extension resource educator in agronomy, was a co-presenter at the event in Brunswick, NY. Gabriel focused on pests that may be chewing their way through farmers’ crops this season. With the mild winter weather thus far, some pests may survive better and pose greater challenges in spring as compared to years with prolonged cold.

“In 2019, several of us CCE educators sampled fields for soybean cyst nematode,” he said. “As expected, it is in more than just one New York county.”

The soybean cyst nematode was found in low levels in Columbia County and with only a 30-day cycle, the population can build quickly. Gabriel encouraged soybean growers to take soil samples for analysis.

“Rotate crops out of soybeans,” he said. “If you continue to grow soybeans, select varieties with SCN resistance. Clean combine tires between fields and work in infested fields last to limit the spread of SCN.”

Although western bean cutworm has been around for a decade, populations continue to grow, with farmers losing money on crops grown on some infected fields. The insect lays eggs in late July on the late-whorl or early tassel corn. The larvae (worms) move to the ears and several worms will feed on one ear (unlike other corn pests), where they can cause yield loss and make ears susceptible to mycotoxins.

“If there are 5% or more plants with egg masses, then an insecticide spray is justified. Genetically modified corn with the Viptera trait (Vip3A) can reduce populations,” he said.

On the weed side of the equation, the newest pigweeds to appear in New York fields are tall waterhemp and Palmer amaranth. Thus far, it’s only been reported in western and central New York counties, but it has a fast growth rate and can be resistant to some herbicides.

“It may have come in on combines from other states, been imported on cottonseed in dairy rations or been in seed mixes,” he explained. “The University of Missouri says that waterfowl may have dispersed the seeds up to 1,700 miles.”

The first line of defense is proper identification and then taking action to prevent infestation.

“Ninety percent control of our ‘new’ pigweeds is still not good enough to stop seed spread. We can’t rely on one pass program for season long term control,” he said. “Use more than one effective SOA in every tank mix.”

Marestail (horseweed), smooth bedstraw and brown knapweed should be monitored in 2020. Cultural and management practices are key in limiting infestations against these invasive weeds.