Farmer Bill Gates in a tractor near you? 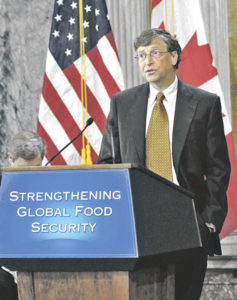 There seems to be a bit of a ruckus around the farm and in rural coffee shops. Cows out? Fences down? Nope, the “gate” to the property was left open for “Farmer Bill” – Bill Gates. Apparently, this isn’t sitting well with numerous farmers, as the billionaire and Microsoft co-founder has corralled an estimated 242,000 private acres, making him the largest owner of American farmland.

That was big news among agricultural circles as “The Land Report” revealed in their 2020 winter issue (landreport.com/2021/01/bill-gates-americas-top-farmland-owner). All told, Bill and Melinda own more than 268,000 acres of farmland, transitional land and recreational properties in more than a dozen states. However, they’re not the largest individual landowners. In its list of 100 top American landowners, the Land Report gives the top spot to Liberty Media chair John Malone, who owns 2.2 million acres of ranches and forests. CNN founder Ted Turner ranked number three with two million acres of ranchland across eight states; Amazon CEO Jeff Bezos is investing in land on a large scale, landing the 25th spot with his ownership of 420,000 acres, mainly in west Texas.

Newsweek dubbed Gates the “Sustainable Agriculture Champion,” but there’s always a backstory. According to their reporting, “His investment in farming may be connected to his investments in climate change agricultural developments and Impossible Foods. Considering that the industrial beef industry is a $3 trillion business and the impacts that climate change will have on agriculture worldwide, Gates’ farm holdings could play ‘vital yet disruptive’ roles in the global future of both.”

That doesn’t seem very aimable, when you consider his acreage could be a source of diverse wealth for over 1,200 beginning farm families in Arizona, Arkansas, Colorado, California, Florida, Idaho, Illinois, Iowa, Louisiana, Mississippi, Nebraska, New Mexico, North Carolina, Washington, Wisconsin and Wyoming – or an area seven times bigger than Manhattan. But where’s the beef? Aren’t we in a free market, capitalistic society? Isn’t it okay for Farmer Bill to keep planting corn, beans, wheat and potatoes to sell into the market and receive the risk management payments and the tax advantages of owning land?

“Slicing (and securitizing) the breadbasket for the roughly 40% of the $3 trillion in U.S. farmland owned by non-farmers, acreage is an investment. And historically, it’s been a shrewd one: Impressive, largely unlevered returns and low enough correlations to traditional assets like stocks and bonds have made farmland a stalwart portfolio diversifier,” stated Farmlandgrab.org.

AcreTrader founder and CEO Carter Malloy agreed, “The near-term future of U.S. farming is one in which venture capital, private equity and greater securitization will inevitably play a greater role in rural communities.”

Farmer Bill could be commended for his work in agriculture, as the Bill and Melinda Gates Foundation has pledged $300 million over three years to farmers in Africa and Asia to “support agricultural research that will help the world’s poorest farmers better adapt to increasingly challenging growing conditions brought about by climate change, including rising temperatures, extreme weather patterns (droughts and floods), diseases, poor soil fertility and attacks from crop pests.”

It may be the way the land deals are made that have many farming advocates concerned. Peel back the layers and it reveals a very real, legal acquisition strategy. Gates, who has a net worth of over $120 billion, reportedly purchased the enormous land resources directly and through dozens of third-party entities, principally via Cascade Investment LLC. The Land Report 100 Research Team stated that “an entity called Cascade Investment LLC has managed the Gates’ personal portfolio as well as the considerable holdings of the Bill and Melinda Gates Foundation for the last 25 years.” These land purchases are one way to diversify the couple’s profitable investments away from technology.

A glimpse of the purchase blueprint comes from Successful Farming reporter Eric O’Keefe: “The Gates’ largest single block of dirt was acquired in 2017: a group of farmland assets owned by the Canada Pension Plan Investment Board (CPPIB). Based in Toronto, the CPPIB began assembling an agricultural portfolio in 2013, when it acquired AgCoA (aka Agricultural Company of America). This private U.S. farmland REIT was a joint venture between Duquesne Capital Management and Goldman Sachs that launched in 2007. Over the next five years, AgCoA acquired more than 100,000 acres in nine states. By the time it was sold to the CPPIB in 2013, AgCoA ranked as one of the leading institutional owners of row-crop farmland in the U.S.

“After AgCoA, the CPPIB acquired a second track of farmland assets when it paid $2.5 billion for a 40% stake in Glencore Agricultural Products in 2016. The very next year, however, the CPPIB began shedding these very same farmland assets as quickly as it had acquired them. And it did this so quietly one might even say it was done in secret,” reported O’Keefe. There was no public announcement, and no notice in the business press. Instead, the CPPIB revealed in the fine print of a quarterly statement that it had sold $520 million in U.S. farmland assets held by AgCoA. This half-billion-dollar figure corroborated the AgCoA acquisition, and the paper trail led directly to Cascade Investment LLC.

“We should all get a little queasy when farmland is compared to an extracted resource like oil or copper. Keeping land productive for the long haul requires a farming system based on a living, biologically-based cycle, not an extractive, one-way industrial process. And a truly sustainable agriculture requires people actively living on and working the land,” said Brian DeVore, managing editor at the Land Stewardship Project.

“The idea that you ‘never sell’ and just ‘sit back and collect huge rents’ leaves no room for the next generation of farming entrepreneurs. It’s a recipe for exporting even more wealth, soil, water and eventually people out of our rural communities. Treating soil like dirt isn’t the answer, but putting it up on a pedestal only reachable by a select few isn’t sustainable either,” said DeVore.

Food sovereignty advocate and environmental activist Vandana Shivas warns of the dangers of “philanthrocapitalism” and monopolistic tendencies, which she said are “boosting the corporate takeover of our seed, agriculture, food, knowledge and global health systems, manipulating information and eroding our democracies.”

“The Gates Foundation has rapidly become the most influential actor in the world of global health and agricultural policies, but there’s no oversight or accountability in how that influence is managed,” said Polly Jones, the head of campaigns and policy at Global Justice Now. “This concentration of power and influence is even more problematic when you consider that the philanthropic vision of the Gates Foundation seems to be largely based on the values of corporate America.”