Farm use and production of biofuels vital to decarbonization 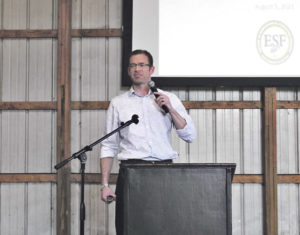 CANANDAIGUA, NY – Farming has long been associated with environmental concerns, including an operation’s effect on carbon dioxide. Tristan Brown spoke on the topic at the 2021 New York Corn & Soybean Growers Summer Crop Tour hosted by Catalpa Farms. Brown is a SUNY associate professor of energy resource economics at the College of Environmental Science & Forestry. He presented “Biofuels and Bioproducts and Their Role in Decarbonizing New York State.”

New York’s 2019 Climate Leadership and Community Protection Act “mandates the complete de-carbonization of New York’s economy by 2050,” Brown said. “This is in every sector in the state.”

He believes that New York is well on its way toward compliance with the law but added “this is going to bring a wide array of changes across all sectors.”

Brown believes that the changes will mirror those of California. “This is what Albany wants to see by the end of the decade,” Brown said.

Unlike previous statewide and national policies, the Climate Act mandates deep decarbonization of the New York State transportation sector, which creates nearly half of the CO2 emissions in the state.

“The issue is New York already has a 10% ethanol blend hybrid where we’ll see a lot of changes,” Brown said.

He added that the first-generation technologies can achieve decarbonization of 20% to 50% in relation to petroleum fuels. These changes relate to corn ethanol blended with gasoline (E10) and fuel economy improvements, like powertrain hybridization.

“Second generation is finding ways to use biomass,” Brown said. These can achieve decarbonization of 50% to 90% or more relative to petroleum fuels. That includes lignocellulosic biofuels, biomass-based diesel and vehicle electrification.

Brown said the Climate Action Council is responsible for what policies will be used to reach the state’s ideal. He foresees the disappearance of light-duty vehicles fueled with ethanol engines.

“Electrifying all farm equipment in the next nine years is what the state wants you to do,” Brown said.

But the idea has limits, both in its effect and its practicality. “Only 43% of every barrel of petroleum produces gasoline,” Brown said. “Only 67% of New York State’s transportation sector greenhouse gas emissions come from gasoline vehicles. Diesel fuel, residual fuel and jet fuel are unlikely to be replaced by electricity before the 2040s, if not later.”

And those changes might not be enough. “Even if we electrified every vehicle, that won’t get us to the state’s goal,” Brown said. “Worldwide, gas is on its way out, but that doesn’t mean petroleum is on its way out.”

In addition to the fuel burners not easily transformed to run on electrical power, equipment and vehicles will still need lubricants, for example.

Bio-based processing may make a big difference, yielding both sustainable fuel and non-fuel products, such as plastic. Brown said bio-based plastic products are growing in popularity. “We don’t usually think of bio-based plastics when we talk about bio-based fuel because we can’t burn plastic,” Brown said.

There is also bio-based asphalt, cement, nanomaterials, soil amendment/sequestration agents and many more products in development.

For farmers raising corn or sugarcane (ingredients used to make ethanol blend fuel), the development of more bio-based products provides an additional market. New York farmers grew 1,050,000 acres of field corn in 2020, including 510,000 acres for grain, with the remaining 530,000 for silage.