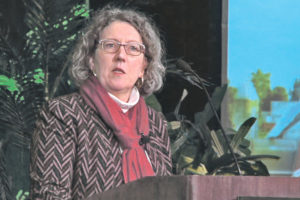 The incoming Biden Administration’s likely agricultural policies and priorities were recently discussed at the American Farm Bureau Federation’s (AFBF) 2021 annual conference. The online presentation “Washington Update: What to Expect from the New Biden Administration and the 117th Congress” was presented by a panel of experts.

AFBF’s Director of Grassroots Program Development Michael Sistak detailed how the 2020 election underscored what’s at stake for farmers across the U.S. “Trump won over 2,500 counties, compared to Biden’s total of slightly more than 500. However, the urban areas that Biden won account for 70% of America’s economic activity. The more rural regions … represent just 29% of the economy.” He explained that this economic rift will likely persist and continue to foster continued clashes between the political parties and alienation between urban and rural constituencies. Sistak added that a Senate controlled by the Democratic Party will see new leadership of the Senate’s agriculture committees and enable the Biden Administration to enact its policies through legislation rather than executive action. “Many Trump-era reforms could be reversed via executive agencies. Trade focus will return to market expansion and World Trade Organization (WTO) enforcement. A Biden Administration is probably less industry-friendly in labor and environmental disputes.”

Patricia Wolff, AFBF senior director of congressional relations, led the discussion on tax policy during the coming term. The two issues of primary importance to member farmers, in her estimation, are the estate tax and capital gains taxation. Estate taxes are currently paid on assets greater than $5.3 million for an individual ($10.6 million for a couple). Farmers who find themselves “land-rich and cash-poor” are wary of the estate tax, as there is the possibility that heirs might have to sell the family farm to pay the taxes due on that farm. “I’ve been hearing since the Democratic primaries that they might want to lower the $5.3 million figure to $3.5 million,” said Wolff. “The other area of concern is applying the capital gains tax, a tax on the profit made from the sale or transfer of an asset, to an estate. This would treat an inherited estate like a purchased property, so a capital gains tax would have to be paid as well as the estate tax. It’s kind of a double hit.”

Congressional Relations Director at AFBF Allison Crittenden said the Biden Administration is prone to broaden immigration reform initiatives like DACA and the H-2A guest farmworker program. “They’ve said they want to see the federal minimum wage increased to $15 an hour as well as supporting overtime pay for farmworkers.” Crittenden explained that an increase in the minimum wage would trigger an increase in the Adverse Effect Wage Rate, a wage rate designed by the U.S. Department of Labor to ensure guest worker wages will not depress the wages of domestic workers in similar occupations. “Many farmers may not be able to afford to keep all their guest workers with this kind of increase.”

AFBF Livestock Specialist Scott Bennett hopes that the 117th Congress will continue to support the relief packages passed by the prior legislature. A spending bill passed last month includes some much-needed assistance for agriculture, including $11.2 billion provided to the Ag Secretary to support producers, processors and contract growers. “Contract livestock growers will now be able to recover 80% of their losses caused by canceled or delayed orders. And we’ve also seen specialty and non-specialty crop growers receive through this round of aid $20 per planted acre. The markets for these crops disappeared overnight when the pandemic hit, and while many of these markets have recovered, the losses from earlier in the year continue to take their toll on farm families,” he said.

Don Parrish, AFBF’s clean water policy expert, called enforcement of the Clean Water Act (CWA) in the Biden era “uncertain.” “This congress has extremely close margins,” he explained. “We really don’t see any legislative path to amend the CWA. The courts will be the wildcard. The Waters of the United States (WOTUS) standard used by the Obama Administration increased the amount of regulations enforced and the types of water falling under that enforcement. The Trump Administration introduced its New Water Protection Rule (NWPR), which held back much of the Obama era enforcement.” There are currently 14 active court cases challenging NWPR. While the Trump Administration defended NWPR, Parrish predicted the Biden Administration will withdraw that defense. “Will a court take down the NWPR? If so, will it be nationwide, or will there be a patchwork of regulations?” Parrish noted that Michael Regan, North Carolina Secretary of Environmental Quality, will be Biden’s EPA Administrator. Regan prioritized climate change and environmental justice while in office in North Carolina.

Dave Salmonsen, a trade specialist at the AFBF, said that how President-Elect Biden proceeds on international trade deals will profoundly affect American ag markets. “The U.S.-Mexico-Canada Agreement (USMCA) entered into force on July 1, 2020. Agricultural exports to Canada and Mexico from the U.S. increased from $8.9 billion in 1993 to $40 billion in 2019. Canada is now our number one export destination. Mexico is number three. There are still USMCA issues Biden will have to resolve, including dairy tariff rate quotas by Canada, certain Mexican labor provisions, Mexico’s treatment of pesticides and biotech approvals and the U.S.-Mexico border situation.” Salmonsen pointed out that the Biden Administration will have to determine whether or not it wants to continue with existing tariffs on cheeses, wines, nuts and other products related to agriculture. “When it comes to trade agreements, the Biden campaign said domestic issues come first, but this will all have to be dealt with.”