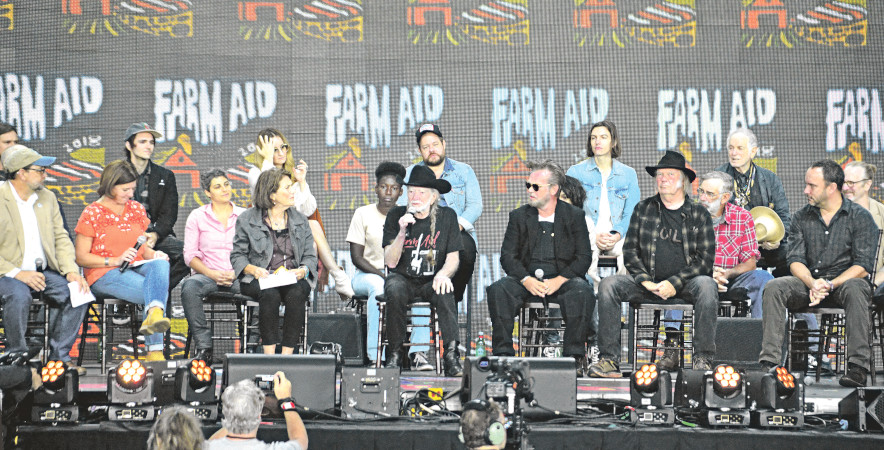 by Michael Wren
HARTFORD, CT – In 1985 Willie Nelson, Neil Young and John Mellencamp hosted a concert to help raise awareness of the loss of family farms across America and raise funds to help keep farmers on their land. Thirty-three years later they are still playing, with many more artists joining them to support family farms.

Farm Aid isn’t just a day-long concert – it has evolved into a non-profit organization that works year round providing funds and support services for farms. In addition, they work with local and national organizations to help provide resources for farmers.
In 33 years they have raised more than $53 million. On the day before the concert, they received three calls from dairy farmers in different states requesting help. According to Jennifer Fahy, Farm Aid’s communications director, checks to all three farms were in the mail the next day.
Over 25,000 attendees came to the Xfinity Theatre in Hartford, CT, for the 2018 Farm Aid benefit concert. This annual event is held in a different city each year and is used to raise money and, more importantly, raise awareness for farmers across the nation. This year included stars such as Nelson, Young, Mellencamp, Dave Matthews & Tim Reynolds, Chris Stapleton, Kacey Musgraves, Sturgill Simpson, Nathaniel Rateliff & the Night Sweats, Margo Price, Jamey Johnson, Lukas Nelson & Promise of the Real, Particle Kid and others. None of the performers were paid to play. They all donated their time and resources to raise awareness about the struggles and pressures of family farming in America.
The benefit also included a Homegrown Village section in which concert-goers could take a little time and learn more about soil, water, energy, food and farming. Exhibitors from across the nation came to inform people of what to look for in food and what to know about starting their own gardens. Topics included the differences between normal crop seeds and GMO seeds, making and using plant-based dyes, papermaking from hemp and creating bitters for drinks. Hands-on exhibits allowed attendees to understand more thoroughly what was being taught. At the Farm Yard Stage, farmers and artists shared inspiring stories and talked about some of the current issues facing farmers. The festival also had a booth where concert-goers could register to vote. A seed swap was also present throughout the day.
The festival included a time for farmers and concert artists to talk and share their concerns on the current state of family farms in the U.S. Connecticut Commissioner of Agriculture Steve Reviczky spoke about the long tradition of Connecticut farming and the challenges they face as they continue producing the food we eat. This was the first Farm Aid held in Connecticut and Revitsky thanked Farm Aid for coming and showing their support for American farmers. He said, “We applaud Farm Aid for staying the course and being with Americas farmers. They are the backbone of this nation and Farm Aid shines a spotlight on those farmers.” Revitsky also spoke on value-added items that family farms can create and work on to give something unique to the consumer.
During this time a video played of a tenth generation farm who just made the decision to sell off his herd. This decision came after trying to compete with larger farms for too long. “You can’t compete in the same marketplace with the same price of milk. I’m 69, my brother is 66, and we’re tired of working for no money,” said Joe Greenbacker of Brookfield Farm in Durham, CT. This emotional tale hit home for many farmers who have seen their friends or neighbors forced to close or sell off as well.
Each performer had a little bit of advice to give on how to best help American farmers, such as Neil Young encouraging the crowd to support family farms and Mom & Pop grocery stores and encouraging people to “never pass a farmers market without going in.”
Willie Nelson pointed out, “Family farmers are keepers of the soil and the land … Everybody eats and so everyone should be very concerned about where their food comes from … I hope most of it comes from local farmers.”
John Mellencamp also gave a passionate speech about how if people want change they need to get out and vote.
While the festival-goers had a great time and enjoyed the music, the main theme of the event stayed relevant throughout. Family farming has and always will be a big part of the American culture and all it takes is little actions by everyone to ensure that this way of life will always be an American pastime – all of which is summed up in Farm Aid’s tagline: “Keep America Growing.”
For more information on Farm Aid and what the non-profit does for family farms visit www.farmaid.org.