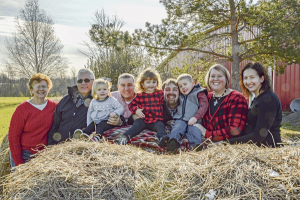 Showing animals formed the beginning of Rugenstein Family Farm in Canandaigua, NY. Owned by Mike Pyra and his wife, Amy, the farm owns 21 beef cows and 6 pigs. Since the Pyras own just 2 acres, they house only the pigs and keep the cow herd at Amy’s parents’ home four miles away, where they have 15 acres designated for livestock. They also raise 75 acres of hay for the beef herd and to sell.

“We love the animals,” Amy said. “They’re personable and funny.”

The couple’s son Grant, 5, wanted to show animals a few years ago. That made Amy recall her 4-H days, when she showed calves. She wanted a similar experience for Grant and his sister, Laramie, 3.

“We want to start them right off in the farm,” she said. “The kids have a few cows in their names.”

She felt it was important for her children to learn about animals and agriculture. They began the farm three years ago.

The farm finishes six steers annually and all the pigs, purchasing them as feeders in spring and raising to finish weight by fall. All the animals graze. In addition to that and their own hay, they purchase cornmeal from a local dairy farm and pellets from Purina.

Though experienced in agriculture, they’ve had a few hiccoughs. 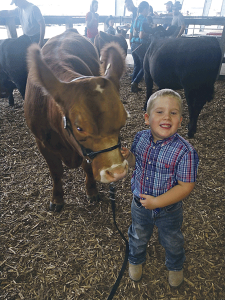 “Our first year, the pigs got out a lot, but towards the end of the season, we did improvement in our fencing and they stay in much better now,” Amy said.

Hartland Abattoir in Gasport, NY, a USDA butcher, takes care of processing. The family sells meat from their home. Up to this point, they had sold beef only by the half or quarter; however, they discovered that many customers don’t have deep freezers they can fill up with that much meat. Refrigerator freezers can’t hold so much.

They also realized that’s a lot of money up front for some people.

To help meet both of those customer needs, they’re now offering meat packages which include popular cuts that give variety while keeping the cost — and amount of meat — more manageable.

They also plan to ramp up sales by selling wholesale to restaurants and markets in the area.

The Pyras don’t have employees. Amy’s sister and brother-in-law, Becky and Tom Snyder, who live in Geneva, also raise cattle. Along with their children, Addison and Cooper, they help with haying and vaccinations.

The farm is a partnership with Amy’s parents, Karen and Randy Rugenstein. All of them have off-farm jobs, Mike working for the local road crew, Amy as a 4-H educator for Cornell, Karen as a FSA loan officer and Randy driving truck and operating a grain elevator.

It’s a balancing act to keep up with jobs and the farm. Amy also thinks that it’s key to a farm’s success to “be upfront with consumers and to educate them. Consumers are very misinformed. It’s important to inform them of the facts about farming and raising meat animals.”

She hopes the family can grow the operation, processing more animals annually. But she’s also content to grow the business gradually. 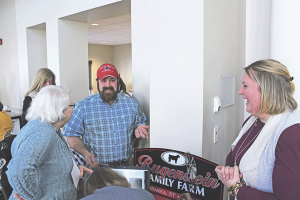 “We believe in taking things slow and steady to get the end results,” Amy said. “I love raising my kids to appreciate agriculture and know where their food comes from. They’re already advocates for agriculture, as my son in Kindergarten is already telling his classmates about farming. He even educates his teacher about our equipment.”

He’s only following in his mother’s footsteps. On March 1, National Pig day, Amy visited her son’s classroom to tell them all about pigs, pleased she could educate the youngsters about agriculture.